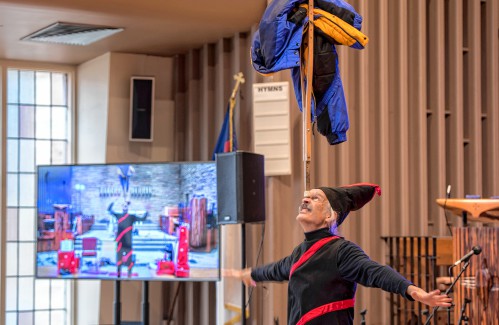 NORTHAMPTON — As the omicron variant has driven the amount of confirmed cases of coronavirus upward of 1 million, First Night Northampton once again celebrated the transition into a new year virtually.

Originally, First Night, now in its 37th year, was slated to include more than 60 live events at a dozen venues in the downtown. Although last year the COVID-19 pandemic forced the 12-hour family arts festival to be held virtually, there was three months’ notice to notify of the change, said Steve Sanderson, event producer for the Northampton Arts Council, which has put together First Night over the last several years. Performances and the ball-raising grand finale were all filmed in advance.

While this year’s First Night event also went virtual, all events — music, storytelling and kids’ theater — were livestreamed at 33 Hawley, The Parlor Room and Edwards Church of Northampton throughout the afternoon and evening on Friday.

“I like this better. Live. A performance should be live,” said Sanderson, adding how much he hoped the event would be in-person. “It’s lacking without the element of the audience, but it’s better than recording. We’re the largest arts performance festival in the state when it takes over the downtown.

“It brings out more passion, more energy when there’s a live audience. It’s part of the magic. It’s part of the thing you can’t explain about art when it’s being viewed by a group. There’s an element that can’t quite be quantified.”

Some of the acts face more of a challenge than others might in not having an audience, he added. Comedic acts and improv troupes in particular feed off of that in-person audience. As such, some of those originally scheduled performers canceled.

In addition to his role as event producer, Sanderson shared his hosting duties with 17-year-old Maddie Freitas, who interns for the Northampton Arts Council. Freitas, who is currently attending Northampton High School, has aims to one day be a meteorologist or TV news anchor. As the clock ticked down to minutes before the 12-hour event was about to start at noon, Freitas admitted that this was her first time tackling a live hosting role before.

“This is new,” she admitted with a nervous laugh.

Throughout the pandemic, however, she watched YouTube and participated in Zoom meetings to learn how to play the alto saxophone and is currently a member of her school’s marching and concert band.

PaintBox Theatre kicked off the day’s festivities and featured actors Kelsey Flynn and Linda Tardif as well as Artistic Director and Founder, Tom McCabe. According to Sanderson, at the same time during last year’s First Night virtual event, there was at least 1,000 viewers watching at the various streamed events.

Other acts early in the day included Henry the Juggler, Talking Hands Theater, Mad Science of Western New England and Tom Knight Puppets. Musical acts like Myles Jéh, a Springfield rapper, songwriter, choreographer and dancer, as well as a capella group The Northamptones, folk-rock band The Nields, folk singer-songwriters Tracy Grammer & Jim Henry also capped off part of the afternoon on the last day in 2021.

Before the ball was raised at the stroke of midnight, organizers were readying an additional light scheme to the celebration scene. The new lighting concept had been discussed and worked on for about three months in advance of the celebration, according to Lighting Designer John Laprade.

“We worked with (Hotel Northampton) to fix anything wrong with the ball … it needed some strobe lights, which were hard to find with the supply chain issues, but their general manager did manage to get some and they replaced them,” Laprade said. “They tested all the midnight moment sequences that are there and we added in some lights that light the side of the building to really make it a focal point.”

The enhanced ball-raising moment featured a lighted corner where Hotel Northampton meets the Courthouse and uplighting of trees. The process over the past three months included site visit assessment to determine what could be lighted, how to make it impactful and how to honor the architecture of the building in order to create a festive, colorful facade.

The globe has been a fixture in the downtown’s First Night since 2008. Sanderson said this was the first time in over 10 years that the globe, which was crafted by sculptor Sam Ostroff of Florence, has been refitted for new lights. The globe is hand-cranked up a spire from its post on the roof atop the Hotel Northampton.

This year’s event also featured two new crankers for the ball-raising, Ryan Thompson and Phillip Bascom. The pair has been practicing the ball-raising in order to get the timing just right, said Hotel Northampton Manager Jeffrey Hoess-Brooks, who promises even more upgrades to the globe for next year.

“This was supposed to be the year that everything happens again, but next year we’ll be back with even more upgrades,” said Hoess-Brooks.

Emily Thurlow can be reached at ethurlow@gazettenet.com