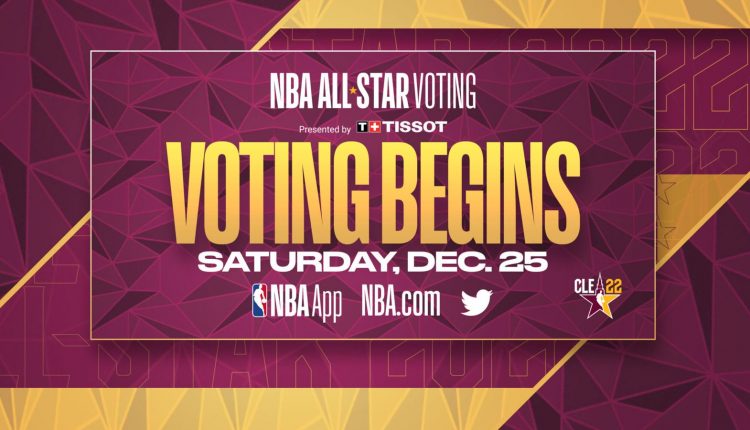 NBA All-Star Voting tipped off on Christmas Day, the league has announced, giving fans the opportunity to vote for the 2022 NBA All-Star Game starters.

The voting officially tipped off on Christmas Day and you can vote by clicking this link right here on a daily basis.

A missive from the league instructs fans to: “Vote for the players who captivate you. Who make you get out of your seat. And who leave you speechless!”

Fans are able to register their votes via the NBA App, NBA.com and Twitter over a period of four weeks between December 25 and January 22.

The 71st NBA All-Star Game will take place on Sunday, February 20 in Cleveland, which is hosting NBA All-Star 2022.

This year’s festivities will celebrate the league’s 75th Anniversary Season. Cleveland last hosted NBA All-Star in 1997, when the NBA commemorated its 50th anniversary.

Throughout the four-week voting period, fans may submit one full ballot each day via the NBA App and NBA.com, as well as vote for up to 10 unique players per day on Twitter. All current NBA players will be available for selection.

Five ‘2-for-1 Days’ will allow fans to have their votes count twice on December 25, January 7, January 13, January 17 and January 20 through the various voting platforms.

The NBA All-Star Game starters, including the two team captains, will be revealed on Thursday, January 27 during the TNT NBA Tip-Off presented by CarMax. The same show will also announce the reserves, as selected by NBA head coaches, on Thursday, February 3.

After all votes are tallied, players will be ranked in each conference by position (guard and frontcourt) within each of the three voting groups – fan votes, player votes and media votes. Each player’s score will be calculated by averaging his weighted rank from the fan votes, the player votes and the media votes. The two guards and three frontcourt players with the best score in each conference will be named NBA All-Star Game starters. Fan voting will serve as the tiebreaker for players in a position group with the same score.

The NBA All-Star Game team rosters will then be drafted by the two captains. They will choose from the pool of players voted as starters and reserves in each conference, making their selections regardless of conference affiliation. The captains will be the All-Star starter from each conference who receives the most fan votes in his conference. Details about the NBA All-Star Draft will be announced at a later date.

How fans can vote:

NBA App: Access the ballot and vote through the NBA App, which is available on Android and iOS. Fans can fill out one full ballot per day (per day is defined as once every 24 hours) by selecting up to two guards and three frontcourt players from each conference when choosing starters.

NBA.com voting page at vote.NBA.com: Fill out one full ballot per day on vote.NBA.com from a desktop or mobile browser. Fans can select up to two guards and three frontcourt players from each conference when choosing starters.

Twitter: Tweet, retweet or reply with a hashtag of an NBA player’s first and last name (#FirstNameLastName) or Twitter handle, along with the hashtag #NBAAllStar. Each tweet may include only one player’s name or handle. Fans may vote for up to 10 unique players per day from December 25 – January 22.

Massachusetts breaks another COVID case record with 21,397 infections in one day