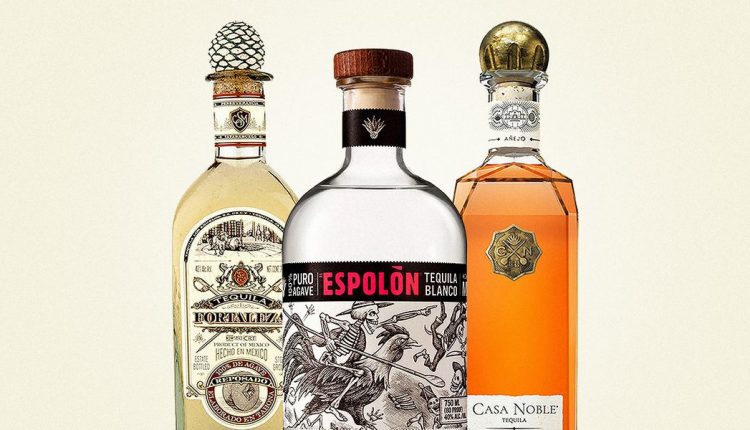 Americans, particularly the famous ones, are in love with tequila. Year after year, the category continues to grow in the States, according to the Distilled Spirits Council. And it seems like a new celebrity-backed brand launches every week—many are forgettable, but there happen to be a few very high-quality celeb offerings.

Forget about mixto, the subpar blend of agave and sugar juice that inevitably leaves you with a killer hangover. We’re talking 100-percent Blue Weber agave tequila (actually a subcategory of mezcal), which can only be distilled in five Mexican states, of which the best known is Jalisco. The traditional method of making tequila involves harvesting agave, cooking the piñas (the heart of the plant) in an oven, shredding and crushing them with the tahona (a large stone wheel), and then fermenting and distilling the juice (or mosto).

Of course, technology has advanced and many distilleries use more modern methods, replacing the tahona with a roller mill, cooking the piñas using steam in a pressurized autoclave, or even using something called a diffuser to “cook” the agave. A diffuser is basically a giant machine that extracts sugar using hot water (and sometimes sulfuric acid). This results in what some unflatteringly call “agavodka,” which is often infused with additives to boost the flavor. Most brands aren’t very forthcoming about the use of diffusers, even though it is legally allowed. Others proudly proclaim that their tequila is additive-free (you can find a decent list of these here)—and transparency goes a long way in the spirits industry.

Get the latest intel on which bottles of booze are worth your hard-earned cash. Join Esquire Select.

Hardcore tequila fans tend to believe diffuser-cooked tequila is an inferior product, but there’s an argument to be made that using this technology actually makes tequila cheaper and therefore accessible to more people. For this list, we tried to focus on brands that use traditional methods, with some exceptions. And we couldn’t include everything—even George Clooney’s baby Casamigos, which was sold off for close to a billion dollars in 2017, didn’t make the cut. Ultimately, regardless of whether a brick oven, stainless steel autoclave, or diffuser was used, it’s all about taste. So here are ten of the best tequila brands available right now. Try them all and decide for yourself.

Patrón helped to define premium tequila when it launched over a quarter century ago. Everything from the bottle design to the marketing to the higher price tag was meant to reinforce its position as a higher-end spirit, and it worked. Nowadays the premium tequila category is thriving, and Patrón remains one of the best bottles, with the Roca range at the forefront. Roca differs from the standard Patrón lineup in that the piñas are crushed solely using a traditional tahona stone instead of a mill, resulting in a more agave-forward flavor. (Patrón uses a combination of the tahona and mill for its core range.) There are also some limited edition and expensive expressions to try, like Patrón En Lalique, which is aged for eight years in American oak, French oak, and sherry barrels, and comes in a crystal decanter. And check out the Estate Release, a silver tequila made solely from agave grown on the grounds around the distillery.

Casa Noble is one of several organic-certified tequila brands, but that’s not why it’s good. No, this is good tequila because it’s crisp, spicy, flavorful, and very versatile. The brand underwent a redesign over the past year, changing the bottles from their formerly squat, boxy shape to a more elegant, decanter-style glass. The liquid has been updated as well, with a focus on barrel selection and blending, eliminating the single barrel releases you could once find. According to founder and master distiller Jose “Pepe” Hermosillo, this means the reposado and añejo expressions are created by “selecting different barrels according to characteristics and integrating up to 14 lots to create complexity and balance.” These aged expressions spend a longer amount of time maturing than some other brands, with the añejo aged for two years in French oak barrels and the reposado for 364 days. All of the tequila is triple distilled, and the distillery implements many sustainable practices.

El Tesoro has the power of Beam Suntory behind it as far as ownership, but the tequila stands strong on its own with a history dating back to the 1930s. From blanco to añejo, El Tesoro produces excellent sipping tequilas, with vegetal notes that play nicely with the sweet agave undercurrent. For something truly special, try El Tesoro Paradiso (featuring a newly redesigned label), a complex extra añejo tequila aged for five years in French oak ex-cognac barrels, which pops on the palate with bursts of vanilla and fruit. El Tesoro claims to be the first tequila brand to use cognac casks for maturation, as well as to create the first extra añejo in the ’80s, which it called “muy añejo” at the time. Another extra añejo expression joined the lineup in recent years, a tequila aged for four to five years in ex-bourbon barrels, and there are single barrel reposado bottles available that were selected by master distiller Carlos Camarena himself.

Espolòn is an inexpensive tequila option that sips far beyond its price point with notes of agave and spice. The distillery, located in the Highlands of Jalisco, cooks the piñas in modern autoclaves instead of traditional ovens. The tequila is then distilled in both pot and column stills, and the aged expressions use smaller virgin American oak barrels with a lighter No. 2 char, although the añejo is rested for an additional two months in heavily charred barrels that once held Wild Turkey bourbon. Overall, Espolòn is a solid option if you’re looking for a dependable tequila that doesn’t cost much.

Milagro is a relatively recent addition to the tequila world, created by two friends in 1997. Apparently, they had a good amount of foresight about the future popularity of the spirit. Milagro bottles are instantly recognizable—tall, sleek, modern, and completely different from any other tequila presentation out there. The liquid within is soft and slightly floral with notes of sweet and spice. In addition to the core lineup, there’s also the Select Barrel Reserve range, which is aged in both French and American oak and comes in silver, reposado, and añejo expressions.

This is another newer brand, having entered the market just over 15 years ago in 2005, but the family behind Fortaleza claims to have close to 150 years of history in the tequila business. This tequila is made using traditional methods, from the stone oven that cooks the agave to the tahona wheel used for crushing and extraction. The reposado is aged for seven months in used American oak barrels, and the añejo for two years. The blanco is an excellent sipping tequila as well, but if you’d like something with a higher proof, try the Still Strength version of this expression. It raises the proof from 80 to 92, the same level it comes off the still, bringing more concentrated flavors to the spirit and adding some extra kick to your tequila cocktails.

El Tequileño is a respected brand that is sometimes overlooked by tequila drinkers, although some of its newer expressions are picking up deserved attention. The blanco is a classic, known for being the tequila of choice in Don Javier’s La Batanga cocktail (tequila, lime, Mexican cola) at La Capilla cantina in Tequila. As far as aged expressions, definitely try the Reposado Rare, aged for six years and four months in large American oak pipons (this can’t be called an extra añejo because of the barrel size). And the excellent Añejo Gran Reserva launched this year, aged for two years in American and French oak barrels, then blended with some extra añejo tequila that spent six years in American oak. If you want to visit the distillery, you can stay at the Casa Salles Hotel Boutique just next door.

It wouldn’t be a tequila roundup without at least one celebrity-backed brand on the list. And one of the best in that category is Código 1530. Country music legend George Strait is the star power behind the brand, although admittedly his stake is relatively small. The bottom line is that this is good tequila, with the Rosa expression standing out in particular. It’s aged for one month in Napa Valley Cabernet French oak wine barrels that have not been charred, infusing the blanco with both color and flavor. If you have deep pockets, you can now track down a 13-year-old extra añejo tequila from Código; just 350 bottles are available at $3,300 a pop. This tequila was finished for an additional six months in cognac casks after more than a decade in wine barrels.

If you’re interested in the concept of terroir and vintage in tequila, Ocho is a good brand to explore. Each batch of this single estate tequila is produced from a specific field or rancho, and the year of production and the name of that field are both included on the bottle’s label. Expressions from plata to extra añejo are available, as well as some single barrel offerings in the añejo and extra añejo categories that are bottled at cask strength of 109.6 proof. Tequilero Carlos Camarena teamed up with Tomas Estes, who was also involved in the tequila business for quite some time, on this brand. Estes passed away last spring, but his son Jesse carries on as the Ocho global brand ambassador.

This brand also got a recent facelift, with new packaging design for the entire lineup. The tequila comes in four expressions, which are each a bit pricey, but with quality to match. From the spicy and fragrant blanco to the rich and buttery extra añejo, which spends two years in American oak, these are tequilas worth tasting. No additives are used in the production of Pasote, and the agave is crushed with a mechanical tahona that acts like a steamroller and is lovingly called “Frankenstein” by the team at the Destileria El Pandillo. Speaking of the team, master distiller Felipe Camarena is an industry veteran who’s also known for making brands like G4 and Terralta.

Jonah Flicker
Jonah Flicker is a freelance writer who covers booze, food, travel, and lifestyle for a variety of publications.