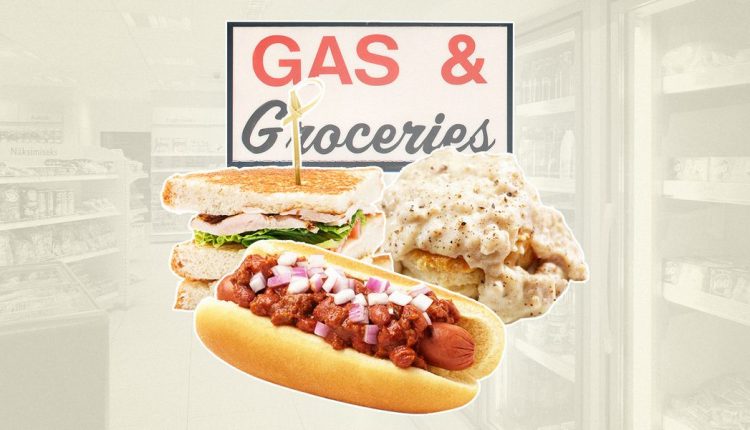 I suppose before we move forward we should have a conversation about what is and isn’t gas station food. If you’ve rolled your eyes and muttered, “I’ve heard about Takis and Slim Jims, Justin,” then I say, “How very dare you.” You see, this is not a 7-Eleven situation. This isn’t even a Sheetz meal or a Wawa menu. The gas station food I’m talking about is prepared on a greasy grill, behind the tiniest of counters. It’s like fast food, but de-corporatized. A gas station cheeseburger or grilled cheese may sound generic. It may come wrapped up in unbranded plastic wrap. But a gas station food item is an ambassador of whichever podunk, side-of-the-highway establishment it comes from, prepared with irreverence yet exuding love.

For one summer I worked at a gas-station-turned-deli, and it was the best summer of my life. A few months before I moved away from home, I had locked down the job at Big Mike’s, set off a highway that takes you into the Smoky Mountains. I was not good at taking orders, nor was I particularly good at sweeping or washing dishes. I believe I was hired because I was the only person tall enough to change out letters on the marquee underneath the old CITGO sign by the road. The fry cook Paula and I used to get in trouble for smoking cigarettes next to the broken-down ice machine out back. Though I may not have been good at the job, getting close to Paula was the best thing I did that summer, because she would cook me anything I wanted, giving me my formal education in gas station foods.

You see, the magical thing about gas station food is that it’s almost always an unplanned meal. It’s a food that you grab along the way, a surprise option en route to a day on the river or at the lake. Maybe a quick meal before you go to a football game. These are meals that find you where you are, all across America: Americana, encapsulated in food.

A gas station food item is an ambassador of whichever podunk, side-of-the-highway establishment it comes from.

You might be asking, “But Justin, how can the quality of these dishes remain static from gas station to gas station?” To that I say, “I don’t know. I’m not a scientist.” But I can say that the below five foods are the definition of what late summer mean to me, that time of year when the heat from long, hot, summer days starts to wane, when it’s not insane to fathom choosing to eat something hot. And there, waiting at any random point in your road trip or weekend errand run is a gas station off the side of the road that just happens to appear at the same time you realize that you’re hungry. It’s the warmth of homemade food for someone on the go. It’s convenience and sincerity, in one of any assortment of dishes.

Let us exalt these gas station meals as the god-tier foods they are.

A gas station biscuit and gravy is technically the only breakfast food to make this list, but it’s the elite, as pure as you can get when it comes to the gas station food canon. Do not expect anything churched up here. No “sage sausage” or “artisanally flavored biscuits.” No, no, this is white gravy, seasoned with black pepper and the residual grease that comes off the diced-up chunks of sausage.

The gravy gets poured over the biscuits, which are likely shoved into a styrofoam container (yikes, sorry environment) for later eating, be it in the car, back at home, or minutes away on the curb outside. Somehow, biscuits and gravy come in three different forms: piping hot, warm but settled (like lasagna), and room-temperature cool. They are good to eat in all forms.

An old café building and gas station along Highway 97 circa October, 1984 in Kent, Oregon.

The chili dog is in the annals of best gas station foods because it is notoriously difficult to fuck up. Bun, dog, chili. You did it. But the key to a good gas station chili dog is the accoutrements. The gas station chili dog is the Build-a-Bear for people who respect the finer things in life. Any combination of relish, diced onions, ketchup, mustard, etc. is welcome, which begs the question: Why not just make this at home? That’s a fool’s question. In addition to the fact that gas station delis have all the aforementioned toppings ready for you, in individual serving sizes no less, it’s the chili that makes this dish sing. Every gas station has a small vat of chili, whether or not your gaze will ever encounter it, and it’s a specific type of chili that is… well, do you know the type of chili that’s been given time to sit and slowly simmer into something else entirely? That’s what we’re talking about. Its appearance may not be beautiful—perhaps even revolting—but its flavor is the perfect melding of bean bits, meat, chili sauce, and seasoning.

The inexplicable nature of why a BLT from a gas station deli is so much better than a run-of-the-mill BLT is part of its allure. I would like to turn your attention to the bread though. I have it on good authority that the secret is in the bread. Of course bacon on a sandwich is going to be good! Anyone can pick out a real pristine tomato; a gorgeously crisp head of lettuce. But gas station grillmasters do this thing where they spread some type of oil on the griddle before throwing down the pieces of bread, and that toasted bread unites all the ingredients.

Paula would never tell me what that oil substance was, though I only took about half of what Paula said to heart anyway, because sometimes she showed up to work drunk. What I do know is that a BLT Club sandwich from a gas station deli is somehow both crisp and buttery. Light, but filling.

A pimento cheese sandwich is a passport to the culture of the rural South, and I will not be hosting any debate regarding its inclusion on this list. Made with cream cheese, cheddar cheese, the red things in olives that everyone hates, and mayonnaise, it’s goopy, a bit unnerving (especially when you catch a bite with a large pimento), and unrivaled. The truth is, there’s something equal parts messy and comforting about richy, creamy pimento cheese finding its true purpose between two pieces of un-toasted white bread, constructed in the safe arms of a gas station deli. It’s as if the bread legitimizes all those naughty, delicious ingredients.

Anything Under the Heat Lamp

The heat lamp section of any gas station deli is sacred. It also burns at a constant 500 degrees, meaning you dare a second-degree burn on your hand when you grab something from within its light orange glow. If you’ve never seen one in person, the heat lamp is fixed over a tray, typically metal with a grate at the bottom for ventilation, and its contents could be just about anything. Is it the morning? There’s probably a variety of sausage biscuits or egg-and-cheese sandwiches. Afternoon? Corn dogs. This is not the gross taquito section at a 7-Eleven. This is a treasure trove of treats, constantly kept at near-scalding temperatures, and despite logic suggesting otherwise, typically the best offering from a gas station. They aren’t just easily accessible, but the heat lamp somehow also keeps them warm without cooking them to burnt crisps. It’s the one mode of food heating that confounds logic and science. An enigma that represents gas station cuisine as no other food item(s) could.

Costco Is Putting Purchasing Limits On These Items