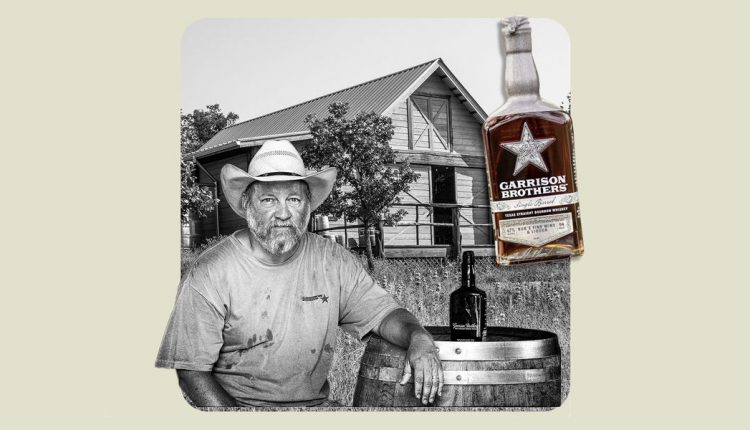 Heat is the sandpaper for shaping Texas whiskey, but it’s only one part of what makes the bourbon produced at Garrison Brothers Distillery, the number one whiskey over $70 sold in the United States.

It’s also a mainstay in Hye, Texas—the distillery’s home base—where temperatures regularly exceed 100°F from June until October every year. These daily temperature swings, from cool mornings to blistering afternoons force the bourbon to move in and out of charred walls in the new American oak barrels. This daily movement extracts more sugars and complex flavors in a shorter time period than in Kentucky. The heat is also a metaphor for founder Dan Garrison’s passion for the spirit: unwavering, unceasing in integrity, and felt by everyone—peers and the fellow distillers—in his sphere.

Dan Garrison hand signs a bottle of the bourbon whiskey.

Before getting into the whiskey business, Garrison was in marketing and was tasked with bringing the Silicon Valley dot-com boom to the Southwest in the mid-1990s. The timing was not on his side—Enron had collapsed, Garrison’s job was eliminated, and his stock options went belly up. He’d also just turned 40. He was ready for a change. Flipping through a local newspaper, he noticed yet another vodka distillery opening in the state.

“Why doesn’t someone make something that tastes good, like bourbon,” Garrison asked his wife. She agreed and suggested he start a distillery—bourbon was his go-to spirit of choice anyway. She jokingly mentioned that it would likely offset the cost of what he was spending in buying whiskey. Curiosity in tow, Garrison set out touring American distilleries, sampling bourbons, and speaking to distillers to learn about the history of the spirit.

Garrison explaining the distillation process, equipment used, and how bourbon is made during a Sit and Sip Tours of the distillery.

Armed with a new perspective, Garrison penned a letter to the Tax and Trade Bureau with one simple question: “Can I make bourbon whiskey in Texas?” The answer that came back was “Yes. You can make bourbon anywhere in the United States.” (Bourbon is defined as a distinctive product of the United States in the North American Free Trade Agreement signed into law in 1964.)

Garrison broke ground for the distillery in 2004, expanding the footprint of bourbon. (He applied for the first distillers’ permit outside of Kentucky and Tennessee, making Garrison Brothers the oldest legal bourbon distillery in Texas.) The first bottles were sold in 2010. Today, depletions in the brand’s distributors’ warehouses are three times more than what they were in 2020, a testament to the loyal fan base of the brand.

So what makes Texas whiskey? For starters, the heat. But also, the terroir and the barrel aging that is created by all that hot weather. In Hye, the heat does the lion’s share of work in the aging process. The daily temperature swings’ result is a liquid that’s ​​cycled through the barrel’s crevices, with deep flavors of baking spice and a fuller, lingering finish from the sap sugars.

Aging barrels in the Texas heat comes at a price. These barrels, while aging in barrel barns, have a very high angel’s share, which means the amount of distilled spirit lost through evaporation. For regions like Kentucky, the angel’s share can range from 4 to 10% a year. At Garrison Brothers Distillery, that loss can be as high as 32%.

As important as the techniques are to the distillery, so are the values that drive Garrison. When he recites the company mission statement, there’s a sense of pride and commitment to both the community and the integrity of the product. Garrison lives up to the mission too with several charitable initiatives. Good Bourbon for a Good Cause, for example, is Garrison Brothers’ non-profit that supports a range of philanthropic activities including supporting veterans’ causes as well as raising money for conservation efforts in Texas.

While a lot of different skills go into managing and running a distillery, most of Garrison’s days are filled with calls with retailers and visits to key accounts. Whether on the road or at the distillery, his passion feeds the flame ignited by his community, giving back, and drinking something that tastes good in the process.