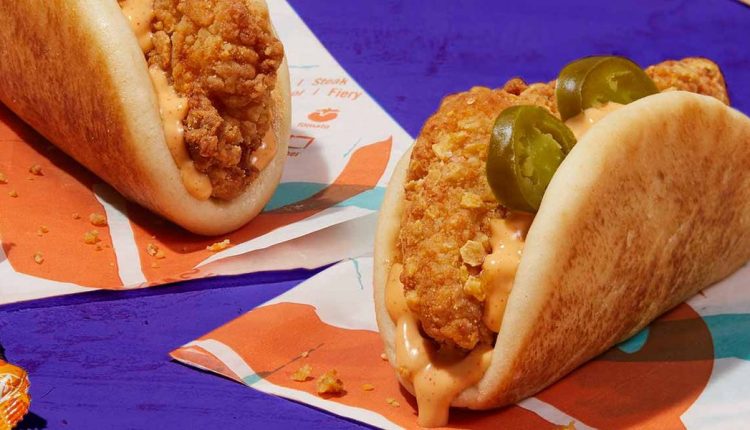 Taco Bell and I have a history. (A lot of people have a Taco Bell history.) I’ve gone through phases of being absolutely wild about Taco Bell, then absolutely despising Taco Bell, then being absolutely wild about Taco Bell, especially now that I can legally consume…things. Recently, we went through a rocky phase, mostly because of Potato Gate, as the potatoes from Taco Bell had been my go-to items. (I’m not vegetarian, I just love starch.) But Taco Bell has brought me back to the meaty side with a delightful new abomination: the Crispy Chicken Sandwich Taco. It was only a matter of time until Taco Bell found a way into the ongoing chicken sandwich war. And so happy am I that it did that it had me looking critically at the entire chicken sandwich sub-category.

Taco Bell is more concerned about setting the world on fire with a debate on whether this thing is a sandwich or a taco, but I’m going to shoot you straight and say I couldn’t give less of a shit about that. What matters here is the experience, which is all sorts of blissful and sinful—fried, creamy, chewy, all with a kick, all types of wrong. It’ll release more serotonin in one sitting than that weekend bender at Burning Man. I’ll let the big TB explain itself further: “We took crispy, white-meat chicken. Marinated it in jalapeño buttermilk. Seasoned it with bold Mexican spices. Rolled it in a crunchy, tortilla-chip coating. Topped it with creamy chipotle sauce. And put it inside a puffy flatbread shell because we could.” The Crispy Chicken Sandwich Taco comes in at about 280 calories. Considering the usual chicken sandwich runs you 380 to 500, depending, I guess you could consider this light fare? I’m sure there is zero nutritional value to it, but if you came here to read “How I Lost 30 Pounds Eating the Crispy Chicken Sandwich Taco” then you’re the type of delusional I’ve been striving for.

While I have eaten a few of these sandwiches now, I cannot personally attest to the “seasoned with bold Mexican spices” aspect, nor the “soaked in jalapeño buttermilk” thing. It probably is both those things, but it’s also just a chicken tender on soft bread drenched in sauce, which is a masterpiece in itself. And I will say, the chicken tender is impossibly crunchy, even lathered in that liquid gold that is Taco Bell’s chipotle sauce. Taco Bell, to my knowledge, has never delved into the chicken tender world before, and there’s a drought of chicken tenders in America’s fast food restaurants. I’m looking at you, chicken selects and snack wraps. For some reason many of the mainstream joints (save for my one true love, Arby’s) rely on chicken nuggets, which don’t quite hit like a good batch of tenders.

The thing I love about the chicken sandwich war in general is the way it ever so slightly edged up the quality of fast food chicken. McDonald’s Crispy Chicken Sandwich is far better than the McNugget patty found in a McChicken, and the tender in Taco Bell’s Crispy Chicken Sandwich Taco is lightyears ahead of the chain’s normal chicken offerings. Everyone’s better for being worse.

Is Taco Bell the winner of the chicken sandwich war? I’m offended that you think I eat enough chicken sandwiches to make that call, but kind of. This stunt is the gas on the fire that this whole movement needed to cultivate the crispy chicken landscape. Is it also an excuse to eat chicken tenders? Beyond any shadow of a doubt. So use this weekend to go get a Crispy Chicken Sandwich Taco. Reflect on yourself, your family, me, and society. Seriously, though, do it this weekend. We all know Taco Bell loves to giveth and taketh away.