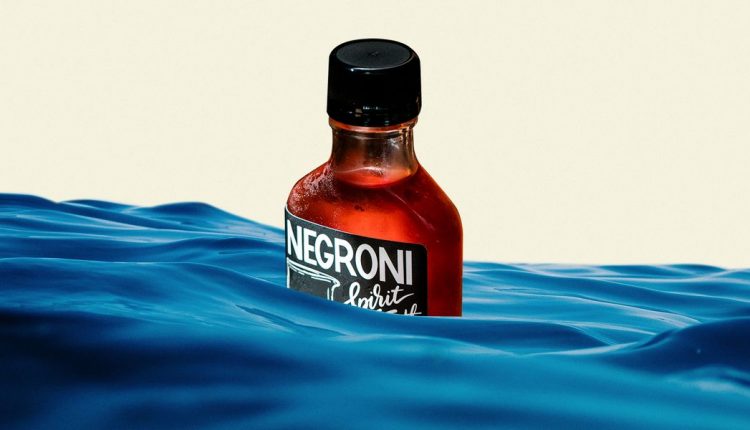 I had just broken the news to him on Wednesday afternoon that the New York State Liquor Authority (SLA) had abruptly—and with a tweet, no less—axed pandemic rules that had allowed bars and restaurants to offer to-go cocktails and other alcoholic beverages. Governor Andrew Cuomo’s announcement ending the State of Emergency that began last March made New York one of only 13 states to end such orders and “return to normal.”

These new pandemic to-go rules weren’t just extremely popular with drinkers across the five boroughs, they were a lifeline for many businesses over the past 15 months. Like Vacheresse’s Travel Bar, my favorite place to sip whiskey in Brooklyn. With customers like me no longer able to belly-up to the bar and drink $15 snifters of esoteric single malt, Vacheresse had pivoted to selling to-go cocktails by March 17, 2020. “We sold very few individual cocktails to go, but large, batched cocktails got us through the pandemic,” he explains. Even today, to-go cocktails still make up 11 percent of his revenue. Drinks like the Barking Mad Bramble, The Nordic, and a variety of barrel-aged cocktails sold for $100 to $150 for a full bottle to-go (about 10 servings). Don’t think Vacheresse was printing money, however. “When I say ‘got us through,’ I mean barely covering our costs.”

This ruling is another slap in the face to a hospitality industry that has been constantly jerked around, if not blatantly ignored, by the government. In fact, the announcement was made with little more than a day’s notice of Friday’s deadline to stop serving to-go drinks.

“Governor Cuomo can’t quit kicking the service industry while it’s down,” says Max Green, a bartender at Blue Quarter in the East Village. He believes the continuous last-minute regulations and frivolous guideline changes have been crippling to businesses and alienating to customers. “Bar and restaurant staff now have to tell their guests they can’t do one more fun thing they have gotten used to—leaving the guests frustrated with their reluctant enforcer.”

Restaurants sold take-away alcohol on the street as New York loosened its alcohol laws during the pandemic.

It’s almost like New York doesn’t want its bars and restaurants to survive. As it happens, most operators I spoke to made analogies to literally dying.

“The emergency aspect of the pandemic may be ending, but the lingering injury needs time to heal,” says Sother Teague, one of the city’s top bartenders and a partner in Manhattan’s Amor y Amargo and Etérea. Nearly a tenth of his total revenue comes from to-go drinks. “We’ve treaded water for so long and to finally arrive at shore doesn’t automatically mean we are saved. We can still die of exhaustion or malnutrition.”

Despite the fact that New York City bars and restaurants are again open to full capacity, and a good portion of the state is vaccinated, people still want to-go drinks. According to one survey, 78 percent of New Yorkers demanded the privilege remain permanently. Countless articles have espoused people’s love of the “walktail.” They’re just fun! Remember fun?

“The state is drowning bars and restaurants in the cruelest fashion.”

“They are taking away something that has psychologically sustained people’s lifestyle and well-being,” says Lucinda Sterling, managing partner of Seaborne and Middle Branch. “Humans are social animals, and it’s natural to be outgoing in a bar setting. Bringing that home enables people to feel natural away from the bar scene. Bars will not return to ‘normal’ without a feeling of awkwardness for months, if not years.”

If you pay attention to the world of alcohol long enough, you’ll eventually realize that all its rules and regulations are rarely made to improve people’s lives (or even community safety), but rather to make powerful, moneyed forces in the industry happy. And that’s seemingly the case here, with the likely culprit the alcohol retail lobby.

“The darker side to this is that it is not just ignorance on behalf of [the politicians in] Albany. These rules have been politicized from the beginning,” says Claire Sprouse, owner of Hunky Dory (an Esquire Best Bar, 2021) in Brooklyn. “The liquor store associations have been organized and lobbying for years to uphold antiquated laws that ensure their survival over others.”

But the thing is, to-go cocktails haven’t affected alcohol retail one bit. In fact, we all spent about $2.45 billion more on alcohol at stores during the pandemic than we did the year before. How would allowing people to purchase $150 batched cocktails to-go possibly hurt? In fact, 15 states have passed bills to make to-go drinks permanent, while 12 other states have extended their period for to-go sales.

Want to stay up-to-date on what to drink (and what not to drink)? Join Esquire Select

“We will have to reconfigure our numbers to adjust for the lack of sales, especially as to-go has been a real extra boost,” says Ivy Mix, a partner in Brooklyn’s Leyenda (an Esquire Best Bar, 2016). “I happen to have just bought a few hundred bottles for our to-go cocktails. I wonder what I will do with them now?”

Most bar owners I spoke to had likewise already purchased supplies (bottles, tamper-evident caps, custom labels) to continue selling to-go cocktails for months. Some told me they stocked so much that they’d have to shell out even more money to get it all hauled away. Angry drinkers on Twitter have commented that all these unused plastic to-go cups should be dumped on the steps of City Hall, so perhaps the pols will understand the incredible pain this rash decision is causing the people they are supposed to be helping.

“The state is drowning bars and restaurants in the cruelest fashion,” Vacheresse told me after I had given him the bad news. “Pulling our heads out of the water and then shoving it back under before we have a chance to take a breath.”

As a longtime booze writer, I know how hard it can be to pin down bartenders for interviews. Unlike many of us, they don’t work in front of screens all day. In fact, for long shifts they are standing up, constantly moving, making drinks, with wet hands to boot, and they might not check their phones or respond to messages for days. But I’ve never had an easier time getting bartenders to drop everything and talk to me for this story.

And that’s because they are all fucking pissed.

Here are some thoughts from others in the industry, who took the time to respond ahead of Friday’s to-go deadline.

“We have a successful cocktail subscription service that does monthly pickups, and we rely on that extra revenue. We can’t just immediately flip a switch and go 100-percent [capacity] and no social distancing; we don’t have the staff for that. No one does. The government’s magic wand approach to making and removing policies has a much more complicated effect on us business operators.”

“[To-go] served as a major stream of income and helped us make it through the pandemic. Between the roadblocks to operating at full hours and capacity, and losing the ability to sell cocktails to-go, we may soon go back to struggling for survival.”

“[We] opened in Park Slope in July of 2020, in the middle of the pandemic, when outdoor-only seating first became available. With no prior base of regulars, we really weren’t sure what to expect, but we were fortunate to find strong support from the neighborhood. Having the option of takeaway service for cocktails and other alcoholic beverages certainly took some of the pressure off the bottom line.”

“To-go cocktails have saved many bars and restaurants that have seriously struggled during the pandemic and have saved several jobs. It’s been a great benefit being able to get a few to-go cocktails along with my to-go food orders. I can help support my fellow bartenders, and it’s also extra revenue for the bars and restaurants. We were thrown a lifeboat and now it’s being taken away. Why stop something that’s been so successful?”

“Taking this away, while many businesses are still working to recover lost revenue from the shutdowns, does not send a positive message to the businesses that play a significant part in not only keeping large numbers of New York City residents employed, but in making it an attractive city for residents as well as tourists, who bring significant amounts of tax revenue to the city.”

“Bars and restaurants made investments in building to-go programs under duress and now are left with sunk costs. It also affects people that have been brought back to work and execute these programs—zero consideration that venues have at least a week of schedules posted. While our sales have dipped from their high of the holiday season [over $10,000] to about $1,000 per month, it’s necessary income to our recovery and has helped us bring more staff back to work over time.”

“I think a lot of businesses were looking forward to to-go being permanent. I know that as a consumer I was hoping for that to be the case.”

“These last-minute changes just reinforce the lack of thought the state has continuously shown the food and beverage industry throughout this pandemic. An industry that was ravaged by the last 18 months deserves more than a two-day lead on discontinuing to-go drinks that require special vessels (cups, cans, bottles!) and, oftentimes, ingredients and labels. Many bars and restaurants have hired designers to make labels, invested in canned or bottled cocktails with long shelf life, and then to have all of that go to waste is another blow we didn’t deserve.”

Which Marvel Character Are You Based On Your Food Choices