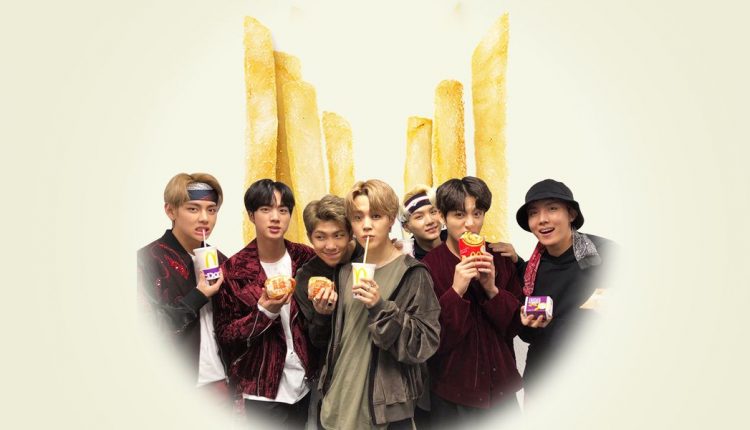 On Wednesday, BTS and McDonald’s released a collaboration that is deeply in my wheelhouse. Nuggs and sauce, baby. Naturally, when I heard this news, I knew what had to be done; I had to order it at 11 a.m. sharp. The meal consists of a 10-piece nugget, medium fry, Coke, and two (2) packets of sauce—one Sweet Chili, one Cajun, both inspired by sauce options available in South Korea. That menu lineup might not seem particularly revelatory, but also, I don’t like when musicians and brands collaborate on something so outrageous that I feel like I have to take a risk. (Remember that one Dunkin’ Donuts collaboration with Charli D’Amelio where she put three pumps of caramel and whole milk in the coffee, and then topped it with sugar? That was never going to land with me.) But I knew going in that I was inclined to love this meal, because, to paraphrase Lin Manuel Miranda’s impassioned speech at the 2016 Tony Awards, “Nuggs is nuggs is nuggs is nuggs.”

What truly piqued my curiosity are these sauces. In just about every experience I’ve had with international fast food—no, I don’t need your shit about how I go to other countries to eat fast food—other places do it better. Why didn’t McDonald’s already have Cajun? Why does American fast food not yet have a stable relationship with Sweet Chili sauce? Pourquoi, I ask!

The whole “thing” with this collaboration is that you’re supposed to order it through the McDonald’s app, so I downloaded that. The app also has exclusive BTS content, which turns out to be an “I spy” situation, where you have to find clues hidden in an AR McDonald’s mockup experience. There’s not really a point to finding the clues, which is fine, because I am not good at clue hunts. I just want to chill with my boys. I hope next week’s game isn’t so demoralizing.

Let’s get to this review though. Obviously, McDonald’s fries are straight fire. It’s been a real month of Sundays since I last had McDonald’s, let alone the nuggs, so I was surprised to discover that the quality of the McNuggets recipe has drastically improved. But the vehicles of chaos here are the sauces. The creamy orange Cajun sauce, completely new to American McDonald’s, is deceptively light. It hits the palate with just a touch of acidity, followed by a mustard punch on the back end. Cavalier in its boldness, and memorable.

In the AR McDonald’s; I don’t like finding clues.

The other contender here is my oft-forgot Sweet Chili. Color me stunned to see that this is simply a sauce I do not remember! The pepper flakes I recalled from previous iterations of McDonald’s since-retired chili sauces are gone. I do appreciate how smooth it is. Not like butter, but smooth on its own merit, and predictably spicy, sweet, and sticky, which I believe are words that ARMY has used to describe Jungkook. I cast no shade on Jungkook, but I much prefer the Cajun sauce to the Sweet Chili. It’s not as aggressive, nor inventive.

All in all, this is a straightforward food collab. No surprises: just nuggets and new sauce. Of course, the real excitement is still to come, with the merch line that BTS and McDonald’s are releasing together. That launch comes later today, at 7 p.m. EST via the Hybe Corporation’s WeVerse shop, and will feature bathrobes and tee shirts and hoodies and umbrellas and tote bags. You get it. People are going to be throwing bows over it.

Perhaps the really mammoth thing here is the partnership between BTS, kings of internet goodness, and McDonald’s, king of Big Macs. I mean, last year K-Pop stans commandeered a racist hashtag to stop the “all lives matter” crew from spreading hateful rhetoric, so McDonald’s is really the beneficiary. At least BTS fans won’t be hungry as they dominate the world. Meanwhile, catch me in the corner eating Cajun sauce off my fingers, watching it all go down.

People Say These 34 Foods Taste Good Both Hot And Cold — But Which Is Better?