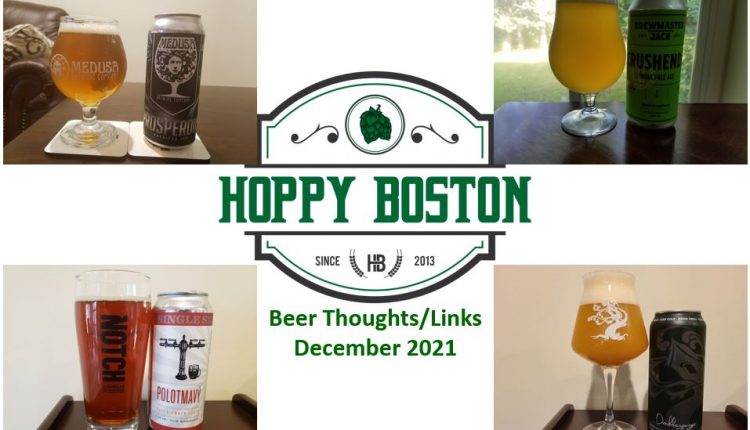 Here is my final thoughts/links column for 2021, or my first of 2022 depending on how you look at it, it’s been a crazy year and Hoppy Boston has taken a bit of a back seat compared to other parts of life, but I am hoping to come back strong in the new year. Thanks for everyone who continues to follow the blog here and on various social media channels, and feel free to send along any articles that you think should be highlighted in my monthly rundown.

The Mass Brew Bros always end the year with a wrap up of the state of Massachusetts beer, and it is a must-read every December. This years round up included a list of the 21 new breweries that opened in the state this year, and a list of 15 breweries that closed in 2021, an all-time high. After years of huge growth in the number of breweries in the state (and across the country), things slowed down a lot this year, and the closures almost caught up with the openings. Obviously COVID played a major role, shutting down or seriously limiting capacity at the taprooms, which are the lifeblood of many small breweries. Unfortunately, I think this could be a trend (I hope I’m wrong). Competition is fierce, and growth in overall craft beer sales has slowed, plus I imagine that many breweries took on debt to survive the pandemic, cutting into already thin margins. Hopefully most breweries are able to build sound business plans, continue to expand their customer bases, and brew delicious and innovative beer in order to keep their businesses rolling forward.

Four friends in central Massachusetts have launched Slow Down Brewing. They don’t have a taproom yet, the beer is being brewed in a garage and sold through draft accounts for now.

Medusa Brewing is opening Wild Hare restaurant and brewery in Hudson, with indoor and outdoor dining space. All of the beers brewed at Wild Hare will have wood used in the brewing process, either using fresh foeders or wine/spirit barrels for fermentation and/or aging. I am really looking forward to this, I love creative barrel aged beers and I imagine that Medusa will make some excellent products in this new space.

Fitchburg’s River Styx Brewing is undergoing a substantial expansion of their brewery and production facility. Hopefully we’ll see more of their bold stouts and IPAs make it to the metro Boston area going forward!

Buzzard’s Bay is closing their Bourne taproom permanently, but will still operate out of their Westport location. It sounds like the pandemic is very much to blame for this.

Hidden Cove Brewing in Wells, Maine has been sold to Batson River Brewing out of Portland. It sounds like they are planning to refurbish the brewery and open it back up in the spring, it will be interesting to see if they continue with the brand.

Stasia Brewczynski has a list of cold-weather beer-related adventures in the great state of Maine!

Gary Dzen has a profile of local brewing legend Tod Mott and the current version of his highly sought after barrel-aged imperial stout, Tributary Mott The Lesser.

The end of the year inevitably leads to a bunch of “best of” lists, in fairness I plan on putting up my list of the best beers I reviewed in 2021 at some point later this week. A few others that came across my plate include Hop Cultures list of their 12 favorite breweries of 2021and Wine Enthusiast’s rundown of the 50 best beers of the year.

Clickbait Article of the Month! While either of the articles above could potentially qualify, I don’t knock publications for doing end of the year best of lists, it can be a good way to highlight some of the best beers/breweries that you have profiled over the course of the year. Instead the “award” goes to Vinepair, who asked 10 brewers what the most over-rated beer styles are. Needless to say, no lager styles were listed, but four of the eight styles listed included the letters I-P-A, and another two could easily refer to IPA variants. This highlights a disconnect between professional brewers and their customer base, and I’m sure generated plenty of clicks and comments.

People Say These 34 Foods Taste Good Both Hot And Cold — But Which Is Better?