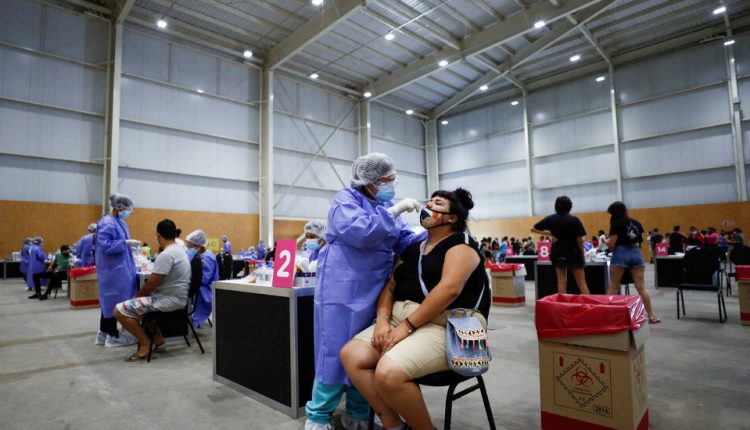 America’s hiring slowdown continued in December as employers struggled to find workers, even before the labor market faced a new threat from the coronavirus — underscoring the tumultuous path ahead as the economy enters 2022.

Employers added 199,000 jobs in December, the Labor Department said Friday, the weakest report of the year. That was down from 249,000 in November.

The unemployment rate fell to 3.9 percent, from 4.2 percent.

Paired with strong wage growth — average hourly earnings climbed by 4.7 percent over the year, more than the 4.2 percent that economists in a Bloomberg survey expected — the swift decline in the jobless rate seems to suggest that a dearth of available workers may be, in part, what is holding hiring back.

“The unemployment rate is a reliable barometer, and it’s going down fast,” said Julia Coronado, founder of the research firm MacroPolicy Perspectives. “It does speak to not having enough labor supply to meet demand — not faltering demand.”

Slackening job growth was especially worrisome because the data released on Friday was collected in mid-December, before the pandemic’s latest wave. Since then, the Omicron variant has ignited a steep rise in new coronavirus cases, driving up hospitalizations, keeping people home from work and prompting fresh uncertainty among employers. Economists are bracing for the surge in cases to further disrupt job growth in January and in the coming months, though it is too soon to say how it will affect the labor market in the longer term.

“I think Omicron will slow hiring in January,” said Nela Richardson, chief economist at the payroll processing firm ADP, said before the report. “It might hit in early February as well.”

The new data sets the tone heading into a crucial midterm election year and could foretell challenges for Democrats, who have struggled to tamp down anxiety about the economy.

The seesawing employment situation underscores the economy’s continued susceptibility to the pandemic, nearly two years on. Although the labor market has brightened, some industries with face-to-face interactions, notably leisure and hospitality, remain extraordinarily vulnerable to case levels.

Restaurants, hotels and other hospitality businesses managed to hire at a steady pace in December — adding 53,000 workers — but other industries struggled to hire. The number of hospital workers actually dropped in December, the report showed, even as those businesses were reported to be scrambling to add nurses and doctors.

The figures may also have been affected by seasonal patterns: Jobs data is adjusted for typical monthly patterns that have been thrown out of whack by the pandemic.

The slowdown could get worse before it gets better, as Omicron cases surge. Many businesses have postponed return-to-office plans, sometimes indefinitely. Restaurants and theaters have increasingly gone dark amid staff shortages and renewed fears of infection. Some schools have returned to remote learning, or are threatening to, leaving many working parents in limbo.

“We’re all sort of at the whims of these variants and surges in cases, and it’s hard to know when they might strike,” said Nick Bunker, director of economic research at the Indeed Hiring Lab. “Any sort of projections or outlook on the pace of gains over the next year or so is still dependent on the virus.”

Employment levels remain depressed compared with the period before the pandemic, even as job openings remain remarkably high by historical standards. The economy has added 18.8 million jobs since April 2020 — when pandemic-related lockdowns were at their worst — but is still down 3.6 million positions compared with February 2020.

Some of those workers may have retired. Others may be waiting to come back when health risks from the virus are less pronounced, or may be struggling to find child care amid regular school shutdowns.

Still, there is plenty of evidence of momentum underlying the uneven economic recovery. A record number of Americans quit their jobs in November, as intense competition, especially in lower-wage sectors, has presented workers with opportunities to demand and seek higher wages and better working conditions.

“We’ve seen these subsequent waves,” Mr. Bunker said. “And then things have reverted to the underlying strength.”

Economic policymakers at the Federal Reserve are aware that many workers are still missing from the labor force, but they have increasingly signaled that they will not wait for workers to return to remove help for the economy. With wages rising and inflation at its highest in nearly 40 years, officials are trying to make sure that prices remain under control.

The figures released on Friday will probably confirm to them that the economy is closing on their full employment goal.

“A lot of the focus at the Fed will be on the lower unemployment rate,” said Gennadiy Goldberg, senior rates strategist at TD Securities, noting that markets actually increased their expectations of rate increases in 2022 after the data release.

Officials have signaled that they could raise interest rates several times this year in a bid to slow spending and cool off a fast-growing economy, and economists think those moves could start as soon as this spring. For now, Fed policymakers seem content to define “full employment” — their job-market goal — as low joblessness.

“I don’t think it’s a matter of some internal conflict between hiking and full employment,” said Michael Feroli, chief U.S. economist at J.P. Morgan. When it comes to declaring victory on job-market progress, he said, “most of them are already there.”