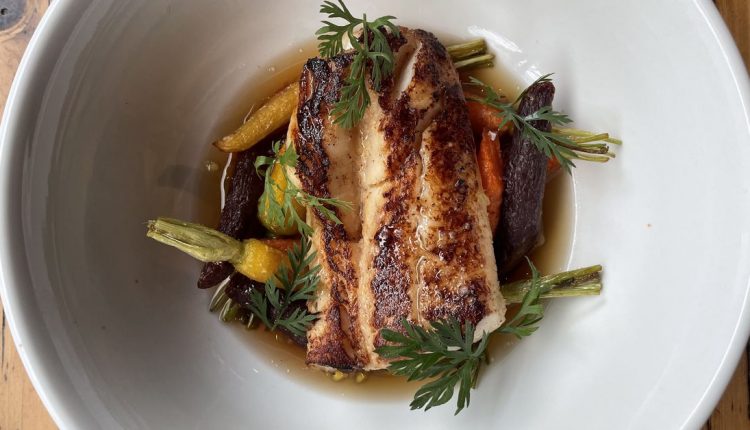 McGuirk’s Folly, a pop-up “fisherman’s tavern” from a couple of local industry vets, arrives in March with a residency inside Middlesex Lounge in Cambridge’s Central Square — and high hopes of an eventual permanent space and a sustainable, fair-wage business model.

“It’s an experimental restaurant testing whether we can create a fulfilling experience without exploiting labor or our environment,” the team — Joe McGuirk and Pierce Kelley — tells Eater. McGuirk is a mainstay in the local bartending scene; he’s been at Highland Kitchen for years (you can still find him there on Tuesday nights) and previously worked at now-defunct Cambridge icons B-Side Lounge and Chez Henri. Aside from lending his name to McGuirk’s Folly, his role is “humble bartender.” Kelley, previously chef de cuisine at Bondir, is “proud cook.”

McGuirk’s Folly will serve a pescatarian tasting menu that features local fish and vegetables; it’s meant to be “highly approachable and precisely executed,” says the duo, describing it as a “wharf-inspired pub where the day’s catch can simply be paired with classic cocktails and cold drafts. It’s lighthearted, honest food and drink in a communal setting that honors the true meaning of community.”

Why pescatarian? “We’re gonna focus on what we do best and leave room for our neighbors to specialize as well,” they say. “We think the best path forward for everyone looks something like that.”

For the opening residency, lasting from March 9 through April 2, the $65 tasting menu — subject to minor seasonal changes — includes fresh sourdough with “fancy accoutrements,” blue mussels and garlic potage, a mudslide shooter, and more.

McGuirk and Kelley first connected behind the bar at A4cade in Cambridge in 2018, with McGuirk drawn there “as he often was to new and outside of the box Cambridge bar projects” and Kelley ending up there “feeling burnt out and discouraged by the overall state of the industry,” looking for a place to “decompress outside the kitchen and perhaps contemplate a career move” outside of the industry.

They bonded over a shared belief “that the economy of restaurants was broken” and that too many industry folks seemed more focused on “Instagram fame or industry clout” than the primary purpose of a restaurant, providing a “hospitable and warm night away from home for everyday members of our community.”

That belief solidified over hot dogs and beers in Cambridge and Somerville backyards “along with lots of friends and family who make their living just like us,” the duo says, but the project didn’t take root yet. They were uncertain about whether the market would be “open-minded enough to give some of our more radical ideas a fair shot,” they say.

Two years later, as the pandemic ripped apart the hospitality industry locally and beyond, McGuirk and Kelley started discussing the idea again — only now with the idea that “maybe the community would be more willing to take part in some sort of hospitality experiment if it meant helping the independents survive.”

Middlesex Lounge is the ideal spot for the McGuirk’s Folly experiment to begin. Owners Dennis Lopes and Chris Young “had always envisioned using the space as an incubator early in the evening as the room sat waiting for the dance party to begin at 10 p.m.,” say McGuirk and Kelley. (Indeed, it’s played host to at least one other business: Tea enthusiasts may have visited the charming tea shop Abide at Middlesex during the day over the past several years.)

The team is considering March a test run for McGuirk’s Folly; if it’s a hit, the next step would be finding a permanent location. “First and foremost we have to find out what happens when we transition our model from a vision and an Excel sheet to the real world,” they say. “Depending on how it’s received will decide whether we can keep the doors open doing some of the more radical stuff we envision.”

A cornerstone of the dream: Creating a business where “workers are paid a wage that will allow them to live in their community without financial hardships,” they say. It’s a model where staff members are given the title “apprentice”; they’re trained in all positions and can work toward partner. McGuirk and Kelley are being transparent about the process and introduced their first hire, Olivia, on Instagram, sharing her base pay — $50/hour with bonus potential — and noting that her schedule will be tailored to maintaining a work/life balance.

Beyond the goal of a fair-wage work environment, McGuirk and Kelley want to minimize the negative impacts the food they serve has on the environment, and they want to do so at an “approachable” price.

“We want folks to have a blast, too, so that dining there isn’t just an exercise of virtue but a great night out as well,” they say. “We’re really shooting for the stars here and want everyone to be part of reshaping their local economies. Our main goal is to drive the conversation and inspire others to make change where they see fit.”

Reservations are available for McGuirk’s Folly’s March run at Middlesex Lounge on OpenTable.

Where to Watch the Patriots vs. Buffalo Bills Playoff Game in Boston