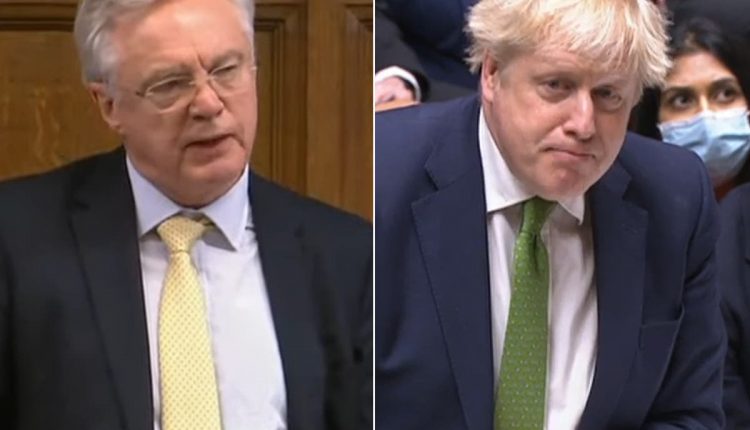 Boris Johnson has been called on to quit by former Tory minister David Davis during a dramatic Prime Minister’s Questions.

Mr Davis told the Commons he expected his leaders to “shoulder responsibility for the actions they take”, accusing the prime minister of doing “the opposite of that”.

“So I’ll remind him of a quotation altogether too familiar to him,” he said. “You have sat there too long for all the good you’ve done. In the name of God, go.”

Mr Johnson was also hit by the defection of a Red Wall MP to Labour just minutes before PMQs.

Bury South MP Christian Wakeford said the country needed a government that “upholds the highest standards of integrity and probity” but told Mr Johnson “both you and the Conservative Party as a whole have shown themselves incapable of offering the leadership and government this country deserves”.

Former Scottish Tory leader Ruth Davidson suggested a no-confidence vote in MrJohnson was now a matter of “when” rather than “if” after 12 more Tory MPs reportedly submitted letters of no confidence on Wednesday morning.

Who is favourite to be the next prime minister?

My colleague Holly Bancroft has the full details:

“I don’t think he’s taking seriously how angry people are about what’s happened. You just can’t behave like that.”

The Metropolitan Police is facing legal action if it fails to investigate reports of the Downing Street Christmas party in 2020, according to campaigners.

A spokeswoman for Good Law Project, which uses the law to “protect the interests of the public”, said it had filed a claim in court over the event.

The prime minister’s official spokesman said he did not have Boris Johnson’s diary for 20 May 2020, when the “bring your own booze” party in Downing Street was held.

He said: “Obviously that whole claim will be something that will be looked at in the investigation, as you’d expect, so either way I wouldn’t be able to comment.”

The spokesman said the PM would usually get a “run-through of his day” in a morning meeting, but he said he could not say what would have been discussed “on that particular date”.

PM’s press secretary not aware of any further impending defections

The prime minister’s press secretary said she was not aware of any further impending defections of Tory MPs.

Asked why it was that Mr Wakeford had left the Conservatives, she said: “On Christian Wakeford, I’ve set our view on that.

“I think more broadly, obviously, the prime minister understands the anger and the hurt that these ongoing allegations have caused across the country and in parliament and that’s why he’s addressed these allegations where he has been able to, and why we are having an investigation to establish the full facts of what has happened.”

She added: “The Conservative Party was elected on an incredibly ambitious manifesto in 2019 and that is what we will continue working together to achieve.”

Speaking to media as she left parliament, she said: “I welcome it, I really welcome it.”

She did not answer any questions about his previous voting record.

Some Tory MPs have now withdrawn their letters of no confidence sent to 1922 Committee chair Sir Graham Brady, according to reports.

My colleague Adam Forrest has these comments from Red wall Tory Jonathan Gullis, the MP for Stoke-on-Trent North:

“What I’m hearing from colleagues is that a number of [MPs], particularly 2019-ers, are actually starting to withdraw those letters.

“I hope those MPs in my intake take a pause for breath, contact Sir Graham … and withdraw their letter.

“I’ve not been told any direct names – but I’m being told names are being withdrawn.”

Mr Gullis said the Tory reaction to Christian Wakeford’s defection to Labour was “complete and utter disgust”, and called for a by-election in his Bury South seat.

My colleague Adam Forrest has these comments from the Covid-19 Bereaved Families for Justice group, which has added its voice to those calling for Boris Johnson to quit.

Dr Saleyha Ahsan, spokesperson for Covid-19 Bereaved Families for Justice, said: “Whilst the prime minister removes public health protections in the hope of saving his own skin, 438 families have tragically lost loved ones to Covid in the last 24 hours.”

“He isn’t prioritising saving lives and, even if he was, no one would take him seriously.

“How can anyone think that this is how life or death decisions should be made? The prime minister has shown he’s unfit for office and should resign.”

Labour MPs who have failed to speak out against a council boss who broke lockdown rules by throwing a party in Whitehall have been branded “hypocrites”.

Our North of England correspondent Colin Drury has the full story:

Health secretary Sajid Javid is to hold a press conference at Downing Street at 5pm today to discuss changes to Covid regulations in England, No 10 has announced.

Mr Javid will face questioning shortly after Boris Johnson’s announcement that Plan B restrictions will be lifted at midnight on Wednesday evening next week, removing all requirements for Covid passes in sports and entertainment events and face-coverings in public places.

More on this from our political editor Andrew Woodcock below: