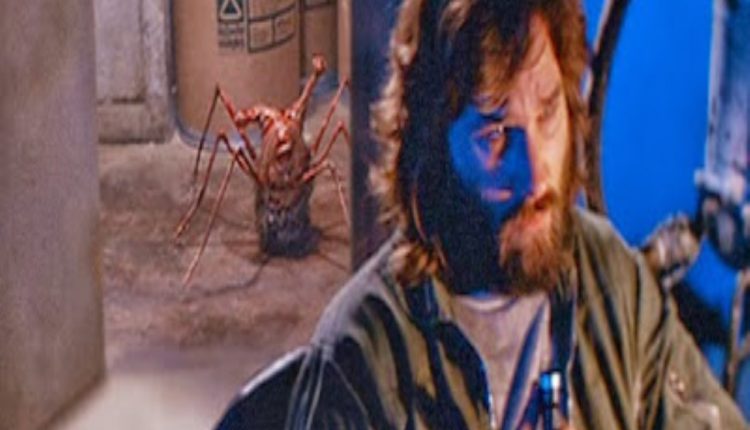 While some may think of the name John Carpenter as synonymous with classic slasher Halloween, the Carpenter oeuvre is largely comprised of the horror genre beyond the knife-wielding, William-Shatner-mask-wearing, Michael Myers. Look no further than 1982’s The Thing—an appropriately grotesque showing of the ’80s body horror genre at its finest.

Instead of a Jack-o-lantern, this film opens in space, a UFO hurdling towards earth, presumably inhabited by the titular character. With the exception of these first moments in space, the film follows an American crew of researchers camped in the seemingly desolate, snowy landscape of Antarctica. A violent encounter with a stranger from a Norwegian camp nearby, leads pilot, R.J. MacReady (Kurt Russell) and Dr. Copper (Richard Dysart) to further explore the area. They discover their Norwegian neighbors’ frozen remains, as well as the charred body of a malformed looking humanoid being. They decide it is a good idea to bring this unknown creature back to their basecamp where their biologist, Dr. Blair (A. Wilford Brimley), can perform an autopsy.

Life on the base camp is thrown into chaos upon discovering that the eponymous thing is in fact a humanoid parasite who assimilates to other organisms, killing them and any other in its path. Battling the thing, turns into battling each other, as the group becomes increasingly weary of one another, unsure of who the extraterrestrial deviant has assimilated with next. In time the thing repeatedly reveals itself, tearing apart the body it joined with from the inside out.

The enclosed basecamp, paired with the dangerous storm taking place outside, feels increasingly suffocating as tensions rise with each creative kill, picking off the crew members one by one. This film, set in isolation, captures the sense of frenzied hopelessness, as the crew members fight to end the thing’s trajectory for good, before it can make its way out of Antarctica and destroys the rest of the planet. Disfigured, bloody and steaming in Antarctica’s cold air, this may not be a film for the faint of heart, but diehard fans of the genre will appreciate this classic horror offering.

Local journalism is more important now than ever. Please support the Hassle by donating to our annual GoFundMe Fundraiser, subscribing to our Patreon, or making a one-time donation via PayPal.

Kendall Jenner is a sultry sensation for Own. Denim’s fall/winter campaign

62% in Mass. in favor of U.S. history MCAS testing

Security stepped up after homeless man found sleeping in…