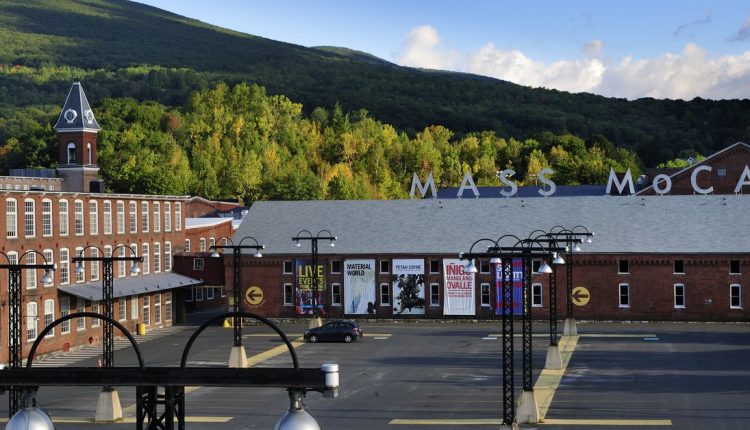 North Adams, Massachusetts, is not only home to America’s largest contemporary art museum (MASS MoCA) and Mount Greylock, whose snow-capped peak became a muse for author Herman Melville, but Massachusetts’s smallest city is also becoming known for its passionate artisans and unique hospitality. A visitor will need the better part of a weekend to begin to explore North Adams and discover why it’s a can’t-miss destination for food, culture, and recreation in the northwest Berkshires region.

The trip from Boston is about three hours by car. By train, there’s a scenic four-hour ride from Boston to Pittsfield that runs once a day, and you’ll have to take a 30-minute cab ride from there, so plan to stay overnight at the Porches Inn once you arrive. These stunning Victorian row houses were once home to local mill workers and now offer a boutique experience for visitors craving that retro-industrial feel. Centrally located on MASS MoCA’s campus, it’s the perfect place to recharge and admire the natural beauty of North Adams.

Read on for a suggested itinerary for an overnight trip, starting with dinner on the day of arrival.

Chingón Taco Truck — Mariah and Justin Forstmann’s pandemic experiment gone right — serves up uniqueness, nerve, and talent out of an 18-foot truck in MASS MoCA’S parking lot May through October. But their experimental winter pop-ups are the kind of collaborative adventures that keep getting better. Dishes like gently sauteed cactus and mushroom, pozole with tomatillo broth, and succulent confit pork ribs in spicy almond mole seamlessly blend the casual and simultaneously complex spirit of this community-oriented team.

Look no further for inspiration than the Distillery at Greylock Works, where master distiller Ryan Max Riley has been crafting artisanal rum and gin in traditional copper stills since 2015. Classic drinks are reimagined with slowly fermented spirits that firmly anchor you in both time and place, like the saffron elixir, made with Forager summer wildflower gin, saffron pistils, and grapefruit bitters. Take-home bottles become archives for ingredients like foraged berries and rose hips, spruce tips, and black birch. The distillery is located inside of Greylock Works, a four-story architecturally reclaimed former cotton-spinning mill which houses a shared culinary lab, coworking space, and production hub.

Or have a nightcap closer to the Porches Inn with one (or two) of Public’s 11 rotating craft beers or thoughtfully crafted cocktails like the Currant Situation — Combier Creme de Cassis, Disaronno Originale, and TNT Bitters Co. Napalm bitters combine to offer a sultry take on the timeless bourbon amaretto using Berkshire Mountain Distillers Berkshire bourbon. The inventive bar program celebrates the regional bounty sourced from local farmers and distillers in an inviting, upscale pub vibe.

Back at Greylock Works, you’ll want to beat the brunch rush at the Break Room, where chef Brian Alberg and his dynamic team are leading the Berkshire food movement by serving up dishes that are both grounding and transcendent. Mirroring the delicate webs of interdependence found in nature, these culinary creatives are redefining community with an emphasis on experimentation. Choose from a tantalizing selection of scones, Danishes, and croissants; the cinnamon glazed palmier and almond croissant do not disappoint. Equally as impressive as the pastry program is the savory breakfast. Standouts include the chili (for vegans and meat lovers alike), poached eggs with crispy house potatoes, and a fluffy frittata filled with mushrooms and cheddar. Be sure not to miss coffee, roasted in nearby Dalton by Currency Coffee.

Barbecue and craft beer have become art forms at A-OK BBQ and Bright Ideas Brewing, located at the entrance of the MASS MoCA campus. During the winter months, A-OK conveniently offers indoor seating inside the seven-barrel microbrewery, making it the ideal place to discover art, community, and conversation. Local producers are the key ingredient to this successful, straightforward menu. Sandwiches made with cofounder Alex Oster’s bread are piled high with smoky pulled pork, chicken, and slaw, while the aptly named Yamwich, roasted and marinated yams topped with collard greens, delivers a knockout punch. Once you recover, grab a side of house sausage (Italian or cheddar) to snack on as you peruse the drink menu at Bright Ideas.

Serving a wide range of brews (lagers, stouts, porters, IPAs) in a 1,400-square-foot taproom, the small yet mighty crew led by Orion Howard (who is also an A-OK BBQ cofounder) has been bridging the gap between apprehensive locals and eager museum visitors with creative but approachable beers since 2016. Try the Horchata pale ale, brewed with rice, cinnamon, vanilla, and milk sugar, or the Dark Ideas imperial stout, brewed with ​​roasted malt, chocolate, coffee, raisin, and star anise. Before heading out, stock up on cans of New England Roots IPA to bring a taste of the Berkshires home.