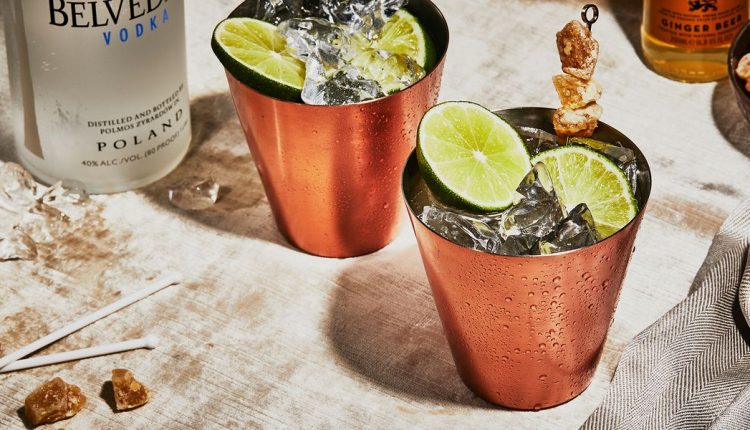 The Moscow Mule practically crackles from its chill. Stuff your nose into the cup before you sip, and the gingery aroma will shoot up into your brain stem, cutting into the haze of your groggy mind like the edge of a Siberian glacier. Cough if you must. Then, it’s time to sip.

This cocktail makes use of vodka as God intended it: covering up that acerbic bite with spice and citrus. As such, the kind of vodka you use doesn’t matter all that much. Stay in theme with something Russian. Or don’t, if you don’t care. However, choose a good, strong, not-too-sweet ginger beer, like the one Q Mixers makes. (Note that ginger ale is not equal to ginger beer, but what the hell, use in case of extreme emergency.) Squeeze your lime juice fresh. And yes, that copper mug and stirring rod sure do make things festive, but a Collins glass will work just fine.

Drink your Moscow Mule while debating matters of geopolitical superpower import, or while chatting about, you know, the book you just finished with your comrades. Anything but politics. Na zdarovje.

Wouldn’t you know it, the Moscow Mule is not of Russian descent. It’s an American cocktail, cooked up in Los Angeles a few years before the Cold War froze up. In fact, it happened to be invented the same year that the Soviet Union and the U.S. became allies, 1941, by two men. One, the bar manager of the Cock ‘n’ Bull bar in L.A., the other a Smirnoff exec who wanted to sell vodka to Americans. (Or perhaps it was the Cock ‘n’ Bull’s bartender, who claimed he made up the recipe to help offload cases of ginger beer that were stacking up his basement.) The Moscow Mule’s iconic copper mug came from the Cock ‘n’ Bull’s idea factory as well.

It was a hell of a marketing campaign. The Moscow Mule got very popular among the Hollywood elite, and according to drinks historian David Wondrich, helped America get better acquainted with vodka. Unlike the Russian-American affair, America’s relationship with vodka has held strong. It should also be noted that in addition to vodka, ginger beer contributes its own global backstory to the Moscow Mule. The British are credited with first brewing it hundreds of years ago, but the ginger they used was in large part harvested from the Caribbean islands they colonized, where it was cultivated by enslaved people. That about wraps up this lesson on world history. Enjoy your drink.

Speaking of Caribbean history, the Dark and Stormy is another ginger beer cocktail, but with Caribbean rum instead of vodka. We’ll also suggest a Kentucky Mule; follow the recipe above, but replace the vodka with bourbon and try a sprig of mint as the garnish. You can also make a highball with ginger ale (not beer) and the whiskey of your choice (but our recommendation is a rye). Finally, there’s a wide world of classic vodka cocktails to dip into, the spirit of Russian origin or otherwise.

Build A 6-Course Meal To Find Out Your Future