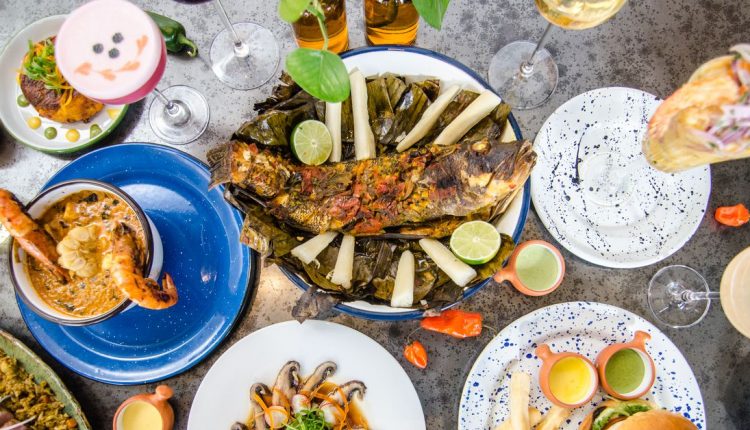 La Royal is equal parts a homecoming and an evolution. The Peruvian restaurant, opening February 22, 2022, at 221 Concord Ave. in Cambridge’s Observatory Hill neighborhood, is sibling to the acclaimed Celeste in Somerville, but co-owners Maria Rondeau and JuanMa Calderón got their start right around the corner at their home on Royal Avenue.

Prior to opening Celeste and later the experimental Vermont restaurant Esmeralda, Rondeau and Calderón — respectively an architect and a filmmaker — hosted dinner parties at home under the name Kriollo Real. Celeste is essentially a continuation of Kriollo Real; its intimate space makes diners feel like they’re at one of those dinner parties in Rondeau and Calderón’s home, and Calderón’s menu is inspired by home-cooked Peruvian recipes he learned from his mother.

Now, after several years of local and national acclaim for Celeste and Esmeralda, the team is opening La Royal steps from where it all began, and some things are the same. Several of La Royal’s employees have been with Celeste since day one, including Joselin Saravia, who started as a dishwasher and is now bartender and cocktail program director, and Isa Santacruz, who started as prep chef and is now production chef for both Celeste and La Royal.

Also the same: The open kitchen is at the heart of both restaurants. (“It’s a performance,” says Rondeau, “and it’s as much an excitement for us as it is for anybody coming in to be part of this whole spectacle.”) Like at Celeste, there is ceviche, although La Royal’s version is from northern Peru — “a little more elegant, more simple, and a lot of lime juice,” says Rondeau. And of course, there’s plenty of pisco.

Smaller details carry through, too; La Royal will soon have a bullet curtain by Chilean artist Daniela Rivera as one of its art pieces, just like Celeste. “We like to work with a lot of the same people over and over again because it helps us keep growing and always roots us back where we started,” says Rondeau.

The roots are strong, but La Royal is undeniably growing, too, physically and conceptually. There’s twice the capacity of Celeste and more space for kitchen gadgets, so Calderón is able to dig into regional cuisines of Peru beyond his mother’s Lima-based home cooking. “This is a much more varied and ambitious menu,” says Rondeau, from arroz con pato from the northern Peruvian city of Chiclayo to chupe de langostinos from Arequipa in the south. There’s a bit of Chifa cuisine as well — Chinese-Peruvian food — a nod to Calderón’s background.

Rondeau and Calderón talk a lot about the ever-evolving nature of their projects; the duo finds beauty in ephemera. (They originally planned to close Celeste after five years, or at least leave it to the team and move onto new projects, and that sense of temporary experimentation gave them the courage to open the doors in the first place.)

La Royal’s space, an early-1900s building that once housed a printing press, is the physical embodiment of that sense of change. Natural light is always shifting through the restaurant, thanks in part to the prismatic transom windows. One of the focal points of the space is a large pothos plant creeping up through a chandelier; monstera and xanadu plants also catch one’s eye. “The plants will continue to evolve and take over,” says Rondeau. “All of the elements in the space will change over time. The copper changes; the metal takes another sheen.”

On a smaller timescale, too, Rondeau and Calderón are planning for change. “We were thinking of making this a space that transforms throughout the day,” says Rondeau, “much like an Italian piazza.” While La Royal serves only dinner to start, lunch service will begin in a couple months, including sandwiches and coffee. Further down the line, the duo hopes to use part of the space as a little shop during the day, selling goods sourced from artisans in Peru and Guatemala (a nod to Calderón’s and Rondeau’s roots, respectively).

La Royal is meant to be a collaborative project, featuring an array of talented friends, producers, and artists in various ways. La Royal’s pastry chef Serena Fix, for example, had her own at-home dinner party series before Kriollo Real existed. When planning La Royal, Rondeau and Calderón approached her to see if she would be interested in collaborating somehow, and now she’s blending Peruvian ingredients with French techniques, making desserts for the restaurant like a roulade with the Andean fruit lucuma.

Author and food scholar Darra Goldstein is involved with the cocktails, consulting on a series of macerations, such as pisco macerated with hibiscus and pomegranate. La Royal’s coffee comes from Cape Cod-based Snowy Owl Coffee Roasters, whose co-owner Manuel Ainzuain is Peruvian and sources direct-trade coffee beans from Peru. And the restaurant’s hamburger buns come from Hi-Rise Bread Company, right across the street.

As for the art, visitors will have to wait a bit longer to see some of La Royal’s planned pieces, but they’ll include the aforementioned bullet curtain by Rivera; a concrete, brass, and glass mega-scale depiction of Cusco, Peru’s famous 12-angled stone in the form of 20 interchangeable frames by Ishmael Randall Weeks; and a huaco, a contemporary version of an ancient pre-Incan bust, by New York City-based Peruvian artist Ana De Orbegoso.

Hit play on the restaurant’s Spotify playlist to get in the mood, and then keep reading for a look at some of La Royal’s dishes.

Here’s the menu, but note that La Royal will be starting with a smaller selection of these dishes, ramping up to the full menu in the coming weeks.

To start, La Royal is open for dinner Tuesday through Saturday; reservations will be live on Resy shortly, but walk-ins are also welcome.

Your Coffee Order Reveals A Certain Truth About Yourself