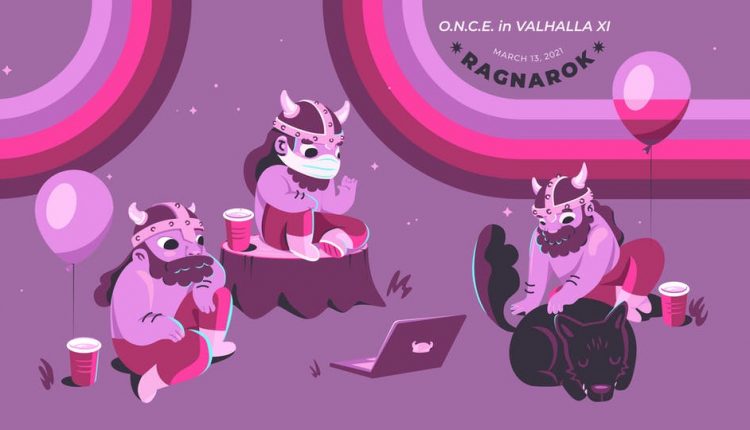 Valhalla XI: Ragnarok, the music festival, will be live and virtual this year, since the physical space for ONCE in Somerville is closed for the virus.

Ragnarok is now ingrained in modern pop culture thanks to the super hero movies featuring Thor the Norse God of Thunder as a superhero.  In Mythology, Ragnarok is the end of the world when the gods battle with great warriors and natural disasters cause the submersion of the world.  These days, it seems Ragnarok is upon us as a natural disaster has put an end to the world we once knew.  It has certainly devastated the live event industry, especially small clubs and venues that could not weather the yearlong shut down imposed by the powers that be.  They have experienced their own apocalypse as many will not reopen and the future is uncertain for many others.

Vikings have invaded our modern world in ways even their marauding ancestors could not.  From TV shows to movies to video games, Vikings are hot.  It is no surprise then that in the midst of the current Ragnarok, The ONCE Ballroom has decided to battle on to have its 11th annual ONCE in Valhalla on the one year anniversary of the state wide shut downs.   This year the event will go virtual, but it still means you can join in on the pillaging and plundering fun all while staying safely home.

Cusine En Locale is the parent catering company to the ONCE Ballroom.  Begun by JJ Gonson as a way to deliver locally sourced meals to the people who demanded it, the company took up residence at 156 Highland Ave in Somerville in 2014.  Shortly after, they opened the ONCE Ballroom and quickly became one of the hottest venues in the Boston area.  It was a quirky, DYI style music venue shoe horned into a former event hall that later became a night club.  The décor was eclectic and passé only to be dressed up into a Bohemian chic that only an authentic punk rock club could muster.  It had style, grace and grit but was never pretentious.  It kept it one hundred percent real first and foremost.

ONCE became a music venue out of necessity.  They would most likely would have been a wedding venue except they had some noisy neighbors.  So to compete, they became a rock club.  In their time as a major music spot, they saw many well know acts like Amanda Palmer of the Dresden Dolls, local star Juliana Hetfield and former Misfits singer Michael Graves.  The well-known party band Andrew W.K. played there as well as many local bands such as Power Slut and The Army of Broken toys.

The Once Ballroom has hosted weddings, meetings and markets.   Major political figures like Bernie Sanders gave a talk there.  Kaiju Big Battle was a frequent show that featured a cross between pro wrestling and Godzilla movies as monsters battled and destroyed miniature buildings.  BLOWW or the Boston League of Women Wrestlers are also regulars.    One Halloween it had a haunted maze built on its dance floor filled with ghouls jumping out from every corner as horror punk bands played upstairs in the lounge.  It truly served as a community space for the arts and the alternative scene.

However, like many venues across the national and even across the world, it did not survive the Covid-19 pandemic that has shuttered so much of America.  On November 25th of 2020, ONCE announced that it would be shutting its doors at its current home.  “We cannot make ends meet. COVID has made it impossible to make the kind of money we need to occupy a space of that size. The insurance, the electricity… I know you get it.”

This is not the first economic hardship endured by the venue.  In 2018, a robbery caused a massive loss of capital that lead to the entire venue shutting down over the summer.  However, it managed to re-open in the fall after the community lent its support to keeping it up and running.  It seemed after a retooling of the business model, ONCE would rally to a stronger position as it continued to produce shows and events in the months that followed.  Then the pandemic struck.  Restaurants and gatherings were being shut down in what nearly everyone thought would be only two weeks to slow spread but has dragged on to a year now.

Already Boston has lost dozens of live event venues.  Thunder Road, the Cantab Lounge, Bull McCabe and The Somerville Brewing Company are gone.  Bars like Flattop Johnny’s, Bukowski’s, The Pour House and Whiskey’s are done as well.  Whole neighborhoods that were the center of life like Inaman Square, Central Square and Boylston Street will never be the same.  Great Scott, a well know music venue that hosted local acts, was about to die in the lockdowns, however there are plans to revise it – possibly at the closed Pizzeria in Alston.

ONCE should be among the newly erected tombstones featuring these lost businesses.  However, they have gone virtual.  For months now they have hosted online events to keep their feet moving.  They have a Youtube channel as well as have events via Zoom.  It seems that wherever there are artists, they must make art, even if at a distance.  Their Facebook states “For now, we will be online at the ONCE Virtual Venue, and we want you to continue to be a part of that endeavor”

JJ was a well-known photographer whose documentation of Boston’s punk scene is legendary.  Her work was recently displayed at the coffee house Diesel in Davis Square were her up close pictures of bands were displayed showing such cultural and historical venues as the Rathskellar (better known as the Rat). It was  Boston’s answer to CBGBs before it suffered the same fate in closing down amid urban revitalization.  It’s no wonder then that she would start her own venue and would emphasize capturing images.

Erin Genett had a decade plus career in multimedia work when she first began to perform music at the ONCE Ballroom.  She took it upon herself to aid in the documentation of the venues numerous live shows capturing many live acts in video both for promotional and archival purposes.  When the pandemic came along, it was not much of a stretch to simply move that process online so that the shows could continue.  She acts as one of the many technical support crew members needed to insure online events go smoothly.

Erin estimates that they have done well over one hundred virtual shows since the start of the shutdowns one year ago.  They have been averaging two to three per week.  Some were shot live on location at the Ballroom while it was still available.  Many were simply zoomed in performances from remote location where the artists performed and were streamed on the ONCE Youtube channel.

The revenue stream has been varied for these live events.  Some events have been “pay what you can” and others had set prices.  When given a choice, many opt to pay for performances and to support the artists they are watching.  ONCE has been proud to be able split revenue with the artist which has kept them working when so few places have allotted any performances at all.

There has been an upside to going virtual.  Artist from almost anywhere can be performers at their venue.  At the same time, the audience can be from around the globe.  Fans that have moved away can still enjoy the show.  It is speculated that this model will stick.  When the venues re-open, it is expected that many will continue to accommodate far away fans by offering a virtual component.  “It’s not that virtual is going away.” Erin said.  “It’s that live events will eventually come back.”

And so the Upcoming ONCE IN VALHALA will go virtual as well.  With Viking Culture becoming a bigger part of cultural consciousness, Norse gods are popping up everywhere.  It’s no surprise then that we will see such well known characters such as Odin, the All Father of Asgard come to ONCE in Valhalla XI: Ragnarok.  Set to be on March 13th, this year’s Valhalla will mark a nearly one year anniversary of the pandemic shut downs.  Odin played by Matthew Stein, acts as host for the feast and the fray.

“Valhalla is about the food and drinking loudly in a hall with others” said Odin.  However, this year they will be doing vignettes with the various participants and segments replacing live interactions.  The gods will be online for some live interaction as well.  It will be Valhalla in your house for 2021.  Each of the characters has created video segments that will be streamed as the events goes on.

“This is a chance to come together for something old and familiar yet entirely new and different.” Odin states.  So what can people expect this year?  Gone will be the feast that Cusine En Locale cooked for the guests on site.  However, you will receive a cook book so that you can create your own Viking inspired meals.  There will also be a chance to order meals from local restaurants that have partnered with the venue.  There will also be beer and mead suggestions for pairing with the various recipes.  It’s not a Viking feast without the food and drink after all.

The theme is of course Ragnarok – the end of the world as we know it.  The music duo of Charming Disaster will be performing remotely as part of the event.  This gloomy yet upbeat combination is reminiscent of classic Tim Burton movies.  They are a bit spooky and colorful all at the same time.  They may be the perfect band for the Armageddon.  They even have a song called “Soft Apocalypse” which may very accurately describe the times we live in. The end is coming.  Or is it?

“We will definitely open somewhere because I am tenacious” says JJ. She is optimistic about finding a new home for ONCE.  Plans are to move all the people, personalities and attitudes into a new inclusive slace.  There isn’t one specific place she is looking at.  When asked about revising one of the many shuttered venues, she is unsure.  Great Scott would be great, but it is no longer available for performance.  Cantab Lounge is too small.  The dream is to go somewhere that doesn’t include noisy neighbors and even have daytime programming in the future.

Those that have studied their Viking Sagas know the true story behind Ragnarok.  There will be a great battle, the world will be destroyed and the land will sink as it is submerged under the waves.  After these events, the world will resurface anew and fertile.   The surviving folks and returning gods will meet and the world will be reopened.  Let’s raise a flagon of mead and a toast to Ragnarok so that the latter events come upon us soon.  So here’s to Valhalla and The ONCE and Future Ballroom.

For more information see Valhalla XI or ONCE on Facebook.

Interview: The Ginger on Ginger Comedy Podcast is the Perfect Antidote to Covid Crisis Blues (5 stars PLUS)

How Diego Osorio Evolved His Family History Into Lobos 1707