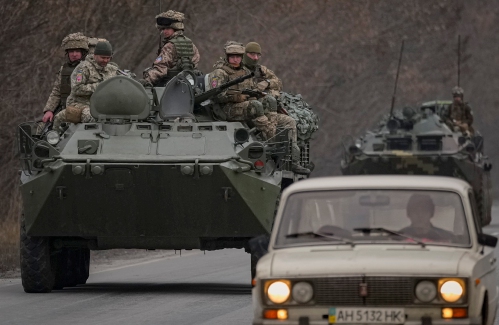 NORTHAMPTON — When Andriy Krip first heard Wednesday evening that Russia had begun an invasion of Ukraine, he began texting family and loved ones in Ukraine, where he was born.

Krip, the priest at Saints Peter and Paul Ukrainian Catholic Church in Ludlow, said what he heard over the phone was fear. Even in the country’s far west, which had not yet seen Russian boots on the ground by early Thursday afternoon, people were forming huge lines at gas stations and cash machines, he said.

“The community here in America, the people who come to church here and those I know who have Ukrainian roots … they are saddened by the events — the invasion of Ukraine by Russia,” he said. “There is no way to justify this invasion.”

Krip was one of many across the region, Ukrainians and others, reacting in shock on Thursday as Russian President Vladimir Putin ordered a full-blown military invasion of Ukraine, launching attacks on cities and airports across the country.

The conflict came after weeks of tension related to Russia’s military buildup along its border with Ukraine. Conflict between the two countries and their allies had been simmering since before 2014, when the Russian military annexed Crimea — home to an important Russian naval base — and backed armed separatist groups in Ukraine’s eastern Donbas region.

Those actions came after a Western-backed revolution in Ukraine replaced the Russia-friendly president from the Donbas region with a pro-Western government.

Serguei Glebov, an associate professor of history at Smith College, studies the history of the Russian empire and Soviet Union, as well as ideologies of imperial expansion and Russian nationalism.

Glebov said that there are multiple stories about why Putin made the move that he did — for example, the West’s expansion of the NATO military alliance right to Russia’s doorstep. There are some grains of truth to those stories, Glebov said, but he said that listening to Putin’s speeches in recent days sheds light on other reasons.

“It’s driven by emotions, it’s driven by a mixture of grievances and resentments and revisionism — not just of the post Cold War order but of the 20th century in some ways,” Glebov said.

It is unclear where the conflict goes from here, Glebov said. Putin could repeat what Russia did in 2008, when it invaded the country of Georgia, struck military installations, captured American equipment and then left, recognizing two breakaway regions but not installing its own regime in the country. If that’s the case, there may be a withdrawal of Russian troops, he said.

Another possible scenario, however, is that Russia attempts regime change in Ukraine with a more protracted war and attacks the capital, Kyiv. That is “definitely the worst scenario,” he said.

As many put blame on Putin, Glebov said that the American public should be asking tough questions about how 30 years of American foreign policy toward Russia after the fall of the Soviet Union has led to this moment.

“What went wrong?” Glebov asked, questioning what kind of security arrangements could have avoided this situation. “These are painful questions and honestly … I am concerned about the fact that many of the people in charge of U.S. foreign policy around the 2014 annexation of Crimea are those in charge of foreign policy now.”

Speaking by phone Thursday, U.S. Rep. Jim McGovern, D-Worcester, reacted with condemnation to the invasion, calling it “baseless” and a “human rights crime.” He noted that Ukraine gave up nuclear weapons after it achieved independence from the Soviet Union, and that some in Ukraine have lamented that they no longer have access to them.

McGovern called Putin a “brutal dictator” who kills and imprisons his opponents, and expressed his support for sanctions against Russia — particularly targeting Putin’s wealth. He said sanctions should come not just from the United States but from the international community, though he also said that he didn’t want sanctions to target regular people in Russia.

“This is Putin’s war,” McGovern said, adding that the United States needs to hold “Putin and his cronies” accountable. “I don’t believe the Russian people support what Vladimir Putin is doing right now.”

McGovern went on to warn against the danger of doing nothing in response to the invasion. That would threaten global security, embolden Putin and possibly entice China to invade Taiwan. McGovern said that he doesn’t believe the U.S. should contribute troops to a combat situation in Ukraine. However, he said if such a move is contemplated it should be brought to Congress.

“I believe that no country should invade another country,” he said.

“I am supportive of President Biden’s measured and appropriate sanctions against Russia,” Neal said, criticizing the “unjustified and unprovoked” invasion. “Putin is a brazen aggressor, acting in dangerous ways that impact Ukraine, its neighbors and much of Europe. Putin must be held responsible, and I condemn his deadly actions. We cannot and will not tolerate his authoritarian regime. Ukraine is a sovereign nation, and we must support them and their people.”

U.S. Sen. Elizabeth Warren also called for the United States to stand in solidarity with Ukraine.

“This Russian invasion will cause immense human suffering, including the potential for mass casualties and people displaced from their homes as refugees,” Warren said. “Together with our NATO allies and international partners, I support President Biden imposing significant sanctions on Russia’s economy, military, and its corrupt oligarchs as a severe consequence for this unprovoked act of aggression.”

Though the conflict is taking place on another continent, it will continue to have reverberations worldwide and across western Massachusetts.

Krip, the Ukrainian Catholic priest in Ludlow, said many in his congregation are feeling pain, including some who moved here after World War II and no longer have relatives in Ukraine. He said the congregation plans to pray for peace in Ukraine this week and on Sunday — something it has done for years now.

Northampton’s Paki Wieland, a longtime peace activist, said she’s worried about the conflict only escalating from here as the United States and Russia dig in. She said many in the U.S. foreign policy establishment are still “cold warriors” with aggressive foreign policy ideas.

“There’s the hypocrisy, there’s the failure to really engage diplomatically and there’s the threat — the absolute, true threat — of a nuclear war,” she said.