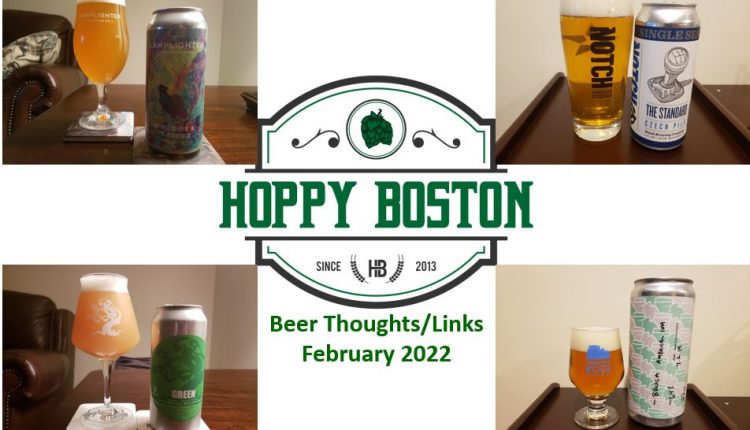 One of the biggest local beer stories of the month is a mixture of sadness and hope. Anawan Brewing spent 5 years realizing their dream, and their taproom had just been featured in a glowing profile, when a devastating fire destroyed their brewery. Naturally the craft beer community has stepped up to help them rebuild. A Go Fund Me was started, and many other local breweries have been amongst the biggest donors. Many other breweries are stepping up in other ways, donating profits from sales of existing beers of brewing a collaboration beer that will help Anawan rebuild. I know the craft beer community has been maligned over the past year, and there are absolutely problems that need to be fixed, but seeing all of these breweries step up to help out is inspiring.

Brienne Allan, the former Notch Brewer and co-founder of Brave Noise whose Instagram story led to a reckoning of the massive problems of sexism, assult and racism in the beer industry, has started her next project. Brienne and her team are opening Sacred Profane Brewing in Biddeford Maine this summer, with a focus on traditional Czech lagers. I cannot wait to visit, I am sure it will be an awesome place.

Redemption Rock has signed a distribution deal with Craft Collective and will now be available across the state of Massachusetts. I highly recommend checking out their beers if you haven’t traveled to their Worcester taproom, they make excellent beer across a wide variety of styles.

More and more breweries are starting their own food service programs, turning their taprooms into full service restaurants. While I understand the reason this would appeal to a brewery, I have mixed feelings about this development. On one hand, as the parent of young kids it is much easier to justify a brewery visit if it is at a restaurant for lunch or dinner with an atmosphere that is somewhat family friendly. On the other, restaurants are a different beast, with many additional headaches. I can think of at least one local brewery that ended up underwater and out of business at least in part because their ambitious restaurant concept featured inconsistent (and often worse) food and service.

Lamplighter has opened their second brewery and taproom in Cambridge Crossing. I can’t wait to check this out, I’ve been a big Lamplighter fan since day one.

Members of the Maine Brewers Guild are teaming up to brew their second collaboration beer, with each brewery open to putting their own unique spin on the beer. Proceeds will benefit the guild itself. Obviously the beer will be an IPA, they do want it to sell well after all!

Sometimes it seems like there are way too many choices when it comes to craft beer. I pretty much exclusively drink beer from the Northeast and I am still overwhelmed by the options at a good bottle shop. It almost makes it a relief when a brewery does something to add themselves to the do-not-buy list. A great recent example is Threes Brewing, which was added to my list after their co-founder and CEO went on a crazed anti-vaccine Twitter rant. I wrote about this extensively earlier in the month, and nothing about my opinion has changed.

Vinepair wonders: Do seasonal variety packs still excite consumers? I used to love seasonal mix packs, they were a great way to try some new beer styles and perfect for parties. The need for these packs has declined with the rise of taprooms that feature beer flights, and especially with proliferation of beer-centric bottle shops that let you buy any beer as a single. I can’t remember the last time I bought a mix pack at a store, although I have made my own at a brewery many times!

Tree House recently purchased an additional 50 acres of land abutting their Charlton headquarters for a cool $2 million. No word on if this is for additional expansions or just to keep their options open in the future.

That is it for February, and I actually got this published on time this month! Progress, I hope. Thanks as always for reading and for following/liking/sharing Hoppy Boston’s posts on social media!