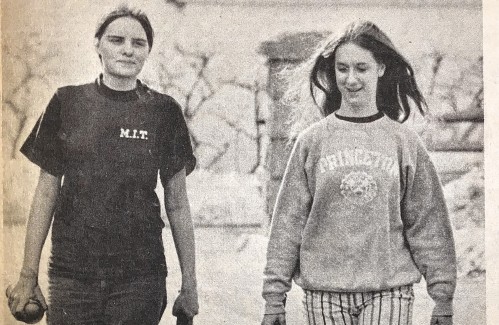 A Look Back: March 2

■Zephyrus gave a hint of the coming delights of spring yesterday when he breathed his balmy breath across the land, producing the warmest March 1st on record. The WHMP weather station reported a high temperature of 61 degrees. The previous record high of 58 was set back in 1954.

■Smith College President Thomas C. Mendenhall announced today that Smith will remain a college for women. Mendenhall stated that the college will continue to have some men in its classes as visiting students, but not as candidates for the bachelor’s degree.

■The Northampton St. Patrick’s Association has announced the winners of the 1997 Joan Tobin Citizenship Award. This year’s recipient from Smith Vocational is Christopher J. Smith. The Northampton High School recipient is Melanie Samolewicz.

■A Northampton resident and shop owner is giving $5,000 toward the creation of a statue honoring Sojourner Truth. Before performers took the stage at the First Churches downtown Saturday for a fundraising concert, the Rev. Peter Ives asked April Eastman, 33, to step from the crowd of over 400 — and revealed her as the donor. The size of the gift and the donor’s identity had been kept secret until Saturday.

■A proposal to double the time a Northampton mayor spends in office to four years will remain as part of a larger overhaul of the city’s charter, though the issue was hotly debated by a split council Thursday night. The debate was one of many the council had during a three-hour discussion about the charter changes, which the council eventually approved at about midnight on first reading.

■Next Thursday, the clubhouse at the Northampton Country Club in Leeds goes on the auction block. According to the auction house, the three-story, 12,000-square-foot building includes a banquet facility that can accommodate about 150 people, the club’s pro shop, a bar and lounge, a custom swimming pool and central air conditioning.

What to Eat and Drink at High Street Place, Boston’s Newest Food Hall

Christopher’s in Cambridge’s Porter Square Is Preparing to Reopen