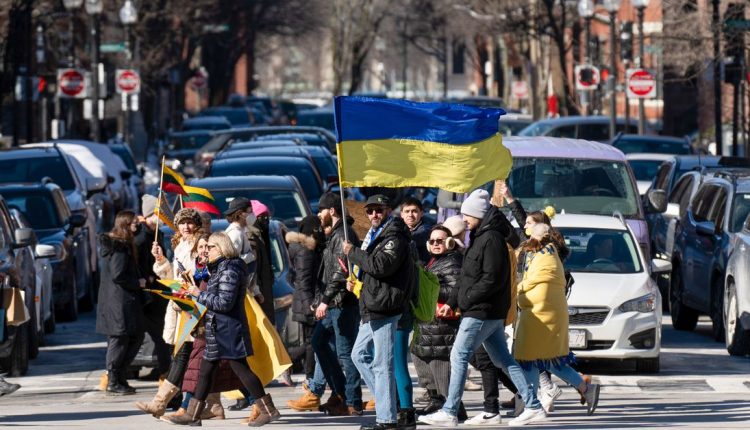 How the Massachusetts Restaurant Industry Is Supporting Ukraine

Restaurants and food businesses around the world are mobilizing in response to Russia’s invasion of Ukraine, whether by raising funds to feed refugees or providing other support in the form of money, supplies, or solidarity.

Restaurateur José Andrés’s World Central Kitchen, a nonprofit food relief organization that has become particularly well-known during the pandemic but dates back to 2010, is on the ground in Poland feeding Ukrainians fleeing across the border. The group is also working in Odesa, Ukraine, and sending volunteers to other nearby countries for extra help.

Locally, World Central Kitchen is a typical target for restaurant industry fundraisers in times of crisis, and it’s no different this time. Massachusetts-based pierogi company Jaju Pierogi, for example, donated $1000 to World Central Kitchen after pledging 20% of one day of sales in late February, and La Saison Bakery in Cambridge held a sourdough bake sale on March 3, 2022, to support World Central Kitchen’s efforts in and around Ukraine.

Below, find ongoing opportunities to donate to various organizations in support of Ukraine, as well as other updates and messages of support from local food businesses. This list will be updated; email boston@eater.com with any information.

On March 7, all Massachusetts locations of Kings will be offering a special $50 package of unlimited bowling (with shoes, pizza, and fountain drinks), with 100% of the proceeds donated to World Central Kitchen.

Tokava Coffee is helping raise money for the shop’s friends Tien Le and Tomek Duszyk, who are buying medical supplies not available in countries neighboring Ukraine and sending them to Warsaw to friends who are retired border guard officers. Donations are accepted via Venmo, and customers are also welcome to bring the requested medical supplies to the cafe (CAT tourniquets, emergency bandages, and Celox gauze). Donate to this fund or any organization supporting Ukraine and get a free filter coffee. Details and updates on Instagram.

The America’s Test Kitchen alum who now publishes his own “breaducational” newsletter is running a rolling bake sale over the next few weeks, offering several different loaves of bread for pickup in Central Square; find the full details here. All proceeds will be donated to Ukrainian relief charities; he hasn’t settled on which ones yet but mentions a few that are on his radar, such as World Central Kitchen, Caritas Ukraine Appeal, USA for UNHCR, and Sunflower of Peace.

During the week leading up to Purim (Purim falls on the evening of March 16 to the evening of March 17 this year), Mamaleh’s will have hamantaschen available and will donate 10% of hamantaschen sales to the Polish Humanitarian Action in support of the assistance it is providing to Ukrainian refugees at the Polish border. It’s part of an international effort called Hamantashen for Ukraine.

Like Mamaleh’s, Blacker’s is participating in Hamantashen for Ukraine and is donating a portion of its hamantaschen sales this Purim.

In honor of a longtime Viale employee from Ukraine whose family is still there, Viale is encouraging donations to a fund that will go toward food, medicine, ammunition, and other necessary equipment for Ukrainians.

Pitstop’s ownership is Ukrainian and has been sharing updates on social media, including several calls to action. For example, people can contact their local representatives and ask them to convey to the government that Ukraine needs protection, medical supplies, and military supplies. Plus, the National Bank of Ukraine has created an account that accepts deposits “for the needs of the military and civilians,” the Pitstop team posted, promising to post information about other organizations in the future.

The company behind four local Russian and European grocery stores (the Newton one goes by the name Baza) has announced that it will stop purchasing and importing Russian products. “We are reaching out to you in these trying times not only as your local business but also as a part of your community that cannot remain ignorant to current events.”

The duo of European teahouses is donating a portion of sales to various organizations supporting humanitarian work in Ukraine. “This war is affecting us since most of our employees are from that region or have family ties there,” Crepes announced. “As an Eastern European restaurant we believe that we have a moral obligation to support the Ukrainian people during this difficult time.”

What if There Was an HR Department for Motherhood?