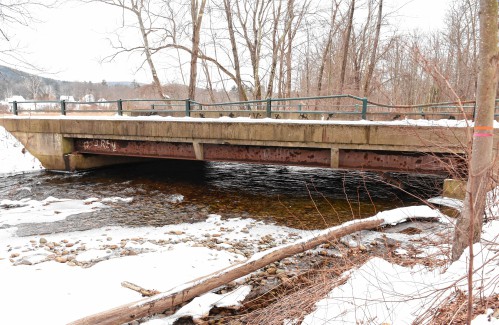 MONTAGUE — State Rep. Natalie Blais and Sen. Jo Comerford echoed their support for increasing state funding for bridge and road projects as they took part in a discussion during a Selectboard meeting on Monday.

In addition to bridge and road funding, over the course of the 30-minute virtual discussion, Selectboard members highlighted the need for wastewater infrastructure improvements and town benefits stemming from the proposed Green Future Act.

The Selectboard’s requests relative to road and bridge funding, as written in the agenda packet, included a proposal to increase state Chapter 90 funding to $300 million annually, as well as the potential creation of a “companion program” to Chapter 90 that is “focused on bridge maintenance alongside technical assistance to advance towns’ understanding of how to cost-effectively address deficiencies noted on MassDOT municipal bridge inspection reports.”

Selectboard Chair Rich Kuklewicz prefaced the discussion by voicing disappointment in how the state Department of Transportation has taken care of bridges.

“MassDOT spends millions of dollars on bridge repairs and replacements or whatever, but they don’t spend much, it appears to me, on maintaining them,” he said.

“Montague is a community that has a lot of bridges, so it’s something that affects a lot of different people,” Selectboard Clerk Matt Lord said. “We’re pleased that there’s been some significant funding that seems to be allocated toward Montague, but at some points, we’re sort of scratching our heads in terms of, ‘Oh! That’s what they decided to do!’”

Town Planner Walter Ramsey praised the state’s February relaunch of the Municipal Small Bridge Program, but reiterated that Montague has bridges in need of repairs beyond those that qualify for state grants, such as the Center Street bridge. He also said South Street bridge repairs, being carried out by MassDOT, would eclipse the grant program’s $500,000 allotment, with work costing more than $2 million.

“We’re still looking at a million-and-a-half investment, which is huge for towns,” Ramsey said.

Blais, D-Sunderland, referred to bridge-related concerns as being at the “top of the list” in terms of issues for her to address.

“(Town Administrator Steve Ellis) has been an incredible proponent and advocate of additional funding for bridges in the town and has really called us to task on the fact that the state needs to invest more in bridges, particularly in communities like Montague that have so many bridges,” she said.

Blais said she and Comerford have been working on “raising awareness at the state level about the real challenges … when it comes to funding these significant infrastructure costs.”

“I am 100% supportive of increasing that Chapter 90 allocation,” Blais said, adding that legislators are engaged in discussions about increasing aid by $100 million.

“We don’t know the way forward,” Comerford said, “but what I can say to you is that I echo Rep. Blais’ commitment to increasing road and bridge funding because of communities like Montague.”

She added that legislators will be advocating for a “rural look” at how funding is allocated, referencing the idea that urban-focused Boston policymakers are out of touch with the needs of rural western Massachusetts.

“As Rep. Blais just laid out, Boston needs some schooling about how our towns both need the money … and we need to actually increase the allocation,” Comerford said.

Pressed for time, discussions about the following agenda items were brief. In terms of wastewater infrastructure improvements, the Selectboard brought up sludge disposal issues and the coming $750,000 screw pump repair project.

“We’ve been hit with some (Environmental Protection Act) issues because of combined stormwater overflow and some releases to the river, unfortunately, and it’s created quite a burden on the community,” Kuklewicz said.

On the topic of the Green Future Act, H.3292, a proposed bill seeking to foster “a green future” through infrastructure and workforce investments, Kuklewicz sought assurance that the state Payment in Lieu of Taxes (PILOT) program would not unfairly penalize rural communities “for the benefit of open space.”

“That’s critical in a town like Montague where we have thousands of acres of land that are state-owned,” he said. “They’re great and they’re good resources, but to continue the funding of PILOT programs is critical to us small folks out in the western part of the state.”

Nations agree to release 60M barrels of oil amid war