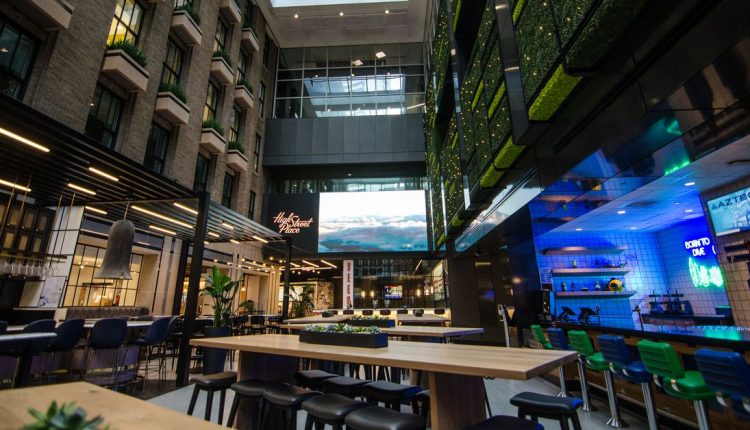 What to Eat and Drink at High Street Place, Boston’s Newest Food Hall

Boston’s newest food hall, High Street Place, finally debuts at 100 High St. in downtown Boston on March 2, 2022, three and a half years after it was first announced. Connecting two Financial District office buildings, it’s 20,000 square feet of choose-your-own-adventure dining and drinking, where customers can select a little bit of everything from 19 local vendors (and a convenience store) and watch sports — up to four games at once — and more on a gigantic LED video wall. There’s a Champagne vending machine, too.

High Street Place is a venue where a person could snack on oysters, a porchetta sandwich, and a big slice of cake while drinking a fancy cocktail; meanwhile, their friends might be sampling an over-the-top fried chicken sandwich, sushi rolls, and gelato-stuffed cannoli. There’s plenty of communal seating, and some vendors have their own seats, too, but everything is fluid: Bring food from one area to another; bring drinks from one area to another. Grab a seat and order right from a table via QR code, if you’d like — during peak hours, runners will be around to deliver the food, and at quieter times, diners who order this way will get a notification when their food is ready for pickup.

When the food hall was first announced in summer 2018, targeting a 2019 opening, it was part of a big boom in Boston-area food hall news. 2019 seemed like it would be the city’s Year of the Food Hall, but the usual construction delays pushed most of the in-the-works food halls into 2020 (or later). And then, of course, 2020 happened. But now High Street Place joins other new-ish players on the scene, including Time Out Market Boston in Fenway and Hub Hall in the West End, in packing a whole bunch of local restaurants — some familiar, some new — under one roof.

“I want people to come and have a good time, enjoy themselves, pick out the things that they love,” says chef and restaurateur Tiffani Faison, who’s behind three of the 20 businesses at High Street Place: a Champagne bar called Bubble Bath, a throwback pizzeria and “grindah” shop called Tenderoni’s, and a southern-Gulf-meets-coastal-New-England seafood spot called Dive Bar.

“I want people to have fun more than anything else,” she tells Eater a few days prior to High Street Place’s opening. She’s talking about Tenderoni’s, whose 1970s-1980s pizza shop aesthetic is inspired by Pizza Hut and its famous Book It program, which rewards kids with pizza for reading books. (“I obviously cheated,” says Faison. “I would read the thinnest books possible.”) But she might as well be talking about the whole venue, which feels like a giant food-filled playground for downtown office workers, locals, and tourists alike.

The rest of the food hall’s lineup looks much the same as it did in fall 2021; the only difference is that local doughnut chain Blackbird Doughnuts has signed on in place of the previously announced Lionheart Confections. Blackbird Doughnuts won’t be open on March 2 with everyone else, but it’s expected to debut by April 1.

Read on for some highlights on where to find various types of food and drinks throughout the food hall.

A number of vendors are serving breakfast, whether you’re searching for something quick on the way to work or a more leisurely weekend meal.

Breakfast sandwiches and such:

Sandwiches are an extraordinarily prevalent choice on High Street Place menus, perfect for a working lunch — porchetta, fried chicken, Reubens, and much more.

All vendors mentioned above in the breakfast sandwich section are also options for a lunch sandwich — Mike & Patty’s for roast beef, Hum’oveh for more “Mediterranean paninis,” Mamaleh’s for deli sandwiches like Reubens and Rachels, and Wheelhouse for burgers.

Wheelhouse, which used to have a standalone location in Boston’s Financial District, is pretty much the same as longtime fans remember, says owner Jon Chase, with just some small changes and improvements. “One thing we’ll stay true to is no tomatoes,” he says. “They don’t belong on a burger, and we’ll never do it.”

For fried chicken sandwiches, head to Wheelhouse sibling Haley Jane’s, which was born out of the ultra-popular Thursday fried chicken special (“thick thigh Thursdays”) at the original Wheelhouse location. “We treat the chicken like we treat [Wheelhouse’s] burgers,” says Chase. “A blank canvas. People seem to dig it.”

This is Boston, so of course there are lobster rolls; find both hot and cold versions at Dive Bar, alongside a tuna melt and a shrimp po’ boy. Dive Bar’s sibling Tenderoni’s partly focuses on grinders (New England for “sub”), including chicken parm and an Italian.

Kutzu, under the same ownership as Hum’oveh, is inspired by dishes from Thailand, Korea, and Vietnam, so on the sandwich side, there’s a chicken banh mi.

And Somerville-based restaurant, caterer, and food truck Pennypacker’s is known for its epic porchetta sandwiches, so that’s a must-try at the food hall. (Pennypacker’s is also serving a few other sandwiches with roasted leg of lamb, grilled chicken, and bavette steak.)

Continuing in the lunch vein, here’s a look at High Street Place’s options for grains, greens, and a few warming soups.

High Street Place features numerous boozy options — more on those below — so here are some highlights in the bar snack realm. Remember that you can bring anything from one vendor to another, so you can snack on tacos at the Champagne bar, wings at the cocktail bar, etc.

Bubble Bath, the Champagne bar from Tiffani Faison’s Big Heart Hospitality, is serving a couple of its own bar snacks — fancy hot dogs and classic popcorn. Or, consider grabbing some “supafries” from sibling spot Dive Bar, a mix of crinkle fries, tots, curly fries, onion rings, and waffle fries, with some optional seasonings and other toppings.

Likewise, the side dishes from Haley Jane’s and Wheelhouse make great bar snacks, including chicken nuggets and waffle fries from the former and tots and onion rings from the latter. Plus, Haley Jane’s has rotating flavors of wings on the weekends. Speaking of wings, Kutzu has Korean-inspired wings in a soy-based sauce and hot Thai wings.

Grab tacos a la carte from North East of the Border (and/or chips with salsa or guac), and head to Pennypacker’s for an entire menu section dedicated to bar snacks, including porchetta fat roasted potatoes, a meat platter with breads and sauces, and panisse with Calabrian chile aioli.

Fun treats for after the meal or an anytime snack.

Some of the aforementioned vendors offer their own desserts, such as halva with banana and strawberry at Hum’oveh, a slice of chocolate cake at Mamaleh’s, sweet waffles at the Farmacy Cafe, and milkshakes at Wheelhouse. But there are also a couple of dedicated sweets vendors. Gorgeous Gelato, a popular Portland, Maine-based shop, is serving gelato, cannolis, and gelato cannolis, among a few other items, and the local doughnut chain Blackbird Doughnuts will be serving, yes, doughnuts once it opens by April 1.

(Also of note: alcoholic desserts. Gorgeous Gelato offers an affogato with a shot of liqueur, while Wheelhouse serves boozy milkshakes.)

Here are a few vendors with especially vegetarian- and vegan-friendly options, but the food hall as a whole has a pretty substantial number of meat-free dishes, so be sure to explore beyond these.

Mother Juice is entirely vegan, while most of the Farmacy Cafe’s menu is or can be made vegetarian or vegan. (There are ample gluten-free options available, too.) North East of the Border offers two vegetarian tacos. Mike & Patty’s helpfully calls one of its sandwiches the Vegan One; it features Just Egg, vegan smoked gouda, mushroom hash, and maple-Sriracha syrup. From a labne bar to mezze to Mediterranean salads, Hum’oveh has quite a few vegetarian picks. And even the sushi spot has some options: Fuji at HSP offers two vegan sushi rolls and a vegan rice bowl.

You’d rather eat at home? Pick up some accoutrements on the way.

Gorgeous Gelato offers gelato by the pint and quart, as well as gelato cakes and other treats that are easy to take home. Mamaleh’s offers retail packs of cream cheese and whitefish salad, as well as merch such as mugs and totes. For sodas, snacks, and the like, there’s always the convenience store, EGO Convenience, a little nod to the bodega that used to operate in the atrium that has become High Street Place.

Highbrow drinks, lowbrow drinks, nonalcoholic drinks: High Street Place has a lot to drink. Here’s the rundown on where to find what.

The obvious choice is Bubble Bath, which features a Moët vending machine and a very bubbly wine list. (It also offers liquor lockers.) “The heart and soul is sparkling wine, especially from its spiritual homeland, Champagne,” says Big Heart Hospitality beverage director Charlie Gaeta, “but it’s a conversation about sparkling wines all around the world. Hipster pet-nat to grower Champagne to some of the bigger players in the Champagne world.”

Bubble Bath’s siblings Dive Bar and Tenderoni’s each offer a few wines by the glass tailored to their menus; a Lambrusco is the “official” pizza wine, per Tenderoni’s. Look for Alsace wines at Kutzu, selections from Armenian wineries Zulal and Keush at Hum’oveh, a few seafood-friendly glasses at Fuji at HSP, and sangria at North East of the Border. Gracenote Coffee is also serving wine.

High Street Place’s main purveyor of beer is Newburyport Brewing Co., conveniently located right by the giant video screen for all your beer-drinking-and-game-watching needs. It’s featuring a bunch of the brewery’s own beers and will also be adding collaborations with other local breweries. There’s also a rotating gluten-free cider.

Find Japanese beers at Fuji at HSP and other Asian beers at Kutzu; grab Bud and Bud Light at Haley Jane’s or Wheelhouse; and find High Life and Peroni at Tenderoni’s.

Because hard seltzer is everywhere, like it or not, it can also be found throughout High Street Place. Look for Newburyport Brewing Co.’s own rotating flavors at its bar, White Claw at Haley Jane’s and Wheelhouse, and an Italian hard seltzer at Tenderoni’s.

Daiquiris & Daisies, from Hojoko alums Daren Swisher and Joe Cammarata, is High Street Place’s cocktail bar. It features a deep list of spirits and plenty of classic and creative cocktails — and not just daiquiris and daisies — from the talented duo.

Cocktail enthusiasts can also find bourbon punches at Haley Jane’s, frozen margaritas at North East of the Border, bloody marys at Wheelhouse, and a Negroni at Tenderoni’s.

A Look Back: March 2