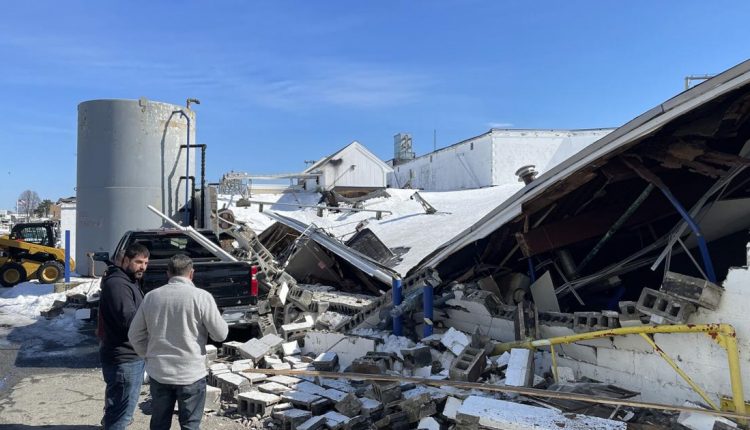 No one was injured when a 5,000-square-foot section roof collapsed at a vacant waterfront industrial building at 80 Commercial St. causing a wall to kick out and trigger a gas leak just after 9 a.m. Wednesday, according to city officials.

“I guess the snow load on the roof just caused the roof to defect and blow the wall out,” said the building’s owner, Vito Giacalone Sr. of Gloucester, at the scene. He said he was thankful no one got hurt and there was no explosion. “The building is basically condemned and not to be occupied. That’s the way we bought it.”

Giacalone said he was on the other side of town when a fisherman called Wednesday morning to tell him of the collapse.

Building Inspector William Sanborn echoed Giacalone’ assessment of the cause of the collapse, but said the investigation is ongoing. He said the building is a total loss.

A black pickup parked adjacent to building was damaged in the collapse. Witnesses at the scene said the truck belonged to a crewman of the fishing vessel Captain Dominic.

The city said there was no evidence debris went into in the harbor or that hazardous materials were released. The city Conservation Division will monitor the site for any environmental impacts.

The building was vacant at the time of the collapse, fire Deputy Chief Tom LoGrande said. National Grid was called and was able to shut off gas without impacting other customers. Gloucester firefighters had to vent the structure due to a build-up of gas inside. They were on scene from 9:08 a.m. and cleared at 10:51 a.m.

The one-story storage building sits among a complex of connected buildings lining Commercial Street. Workers in the office at Ocean Crest Seafood/Neptune’s Harvest Fertilizer at 88 Commercial St. said they were evacuated for an hour but declined comment. The city said this adjacent two-story building was not damaged.

According to the deed for the cinderblock building, 80 Commercial St. LLC, whose manager is Giacalone, purchased the building from the Grace Curcuru and Rose Filetto family trusts for $200,000 at the end of December. The deed describes the property as having a one-story structure, built in 1955, containing 31,224 “rentable square feet,” a flat roof, and a 7,800 square foot dock. The property is assessed at more than $1.2 million.

Giacalone said the electricity had been removed from the building and the gas was supposed to be shut off.

“But, obviously that was the emergency — the gas, right?” he said. “So, no one knew that that was live, that was a live line coming up against the building. That should have been capped in the street years ago when they condemned the building.”

Giacalone said he believed the building, which had always been an active fish processing plant, was condemned in 2017. The city building commissioner could not be reached to verify that.

Giacalone had planned on taking down the section of the building that collapsed and rebuild, keep the two-story sections, and rebuild a wharf that had caved in in 2017.

“We didn’t want it to happen like this because it causes a disruption in the neighborhood and then the gas was a dangerous thing,” he said.

He said he has to coordinate to get equipment to the scene.

“Our plan is to do the cleanup on that. First, we have to get all the proper permitting and also we have the engineers in motion on that,” he said. “Once we get our permits we’d be looking to rebuild and put a new dock at higher elevation, all new timber dock.”

Giacalone said his family owns the wholesale seafood dealer on Fisherman’s Wharf on Rogers Street. He owns the building but he doesn’t own the business. His three sons, Chris, Vito and Nick, do. “They are always looking for extra space, so that’s the first priority.”

Giacalone had praise for the city’s response.

“Everybody was responsive — the DPW, the Fire Department, the police, National Grid was down here.”

The city said traffic will be restricted on Commercial Street until the demolition is completed, and drivers are advised to avoid the area.

Staff writer Ethan Forman can be reached at 978-675-2714, or eforman@northofboston.com.

A Look Back: March 3