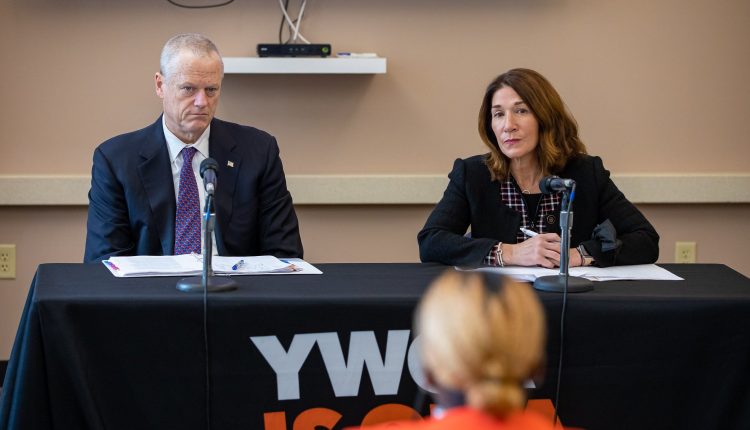 For a woman in the Springfield area, it took two to three months before she could get a restraining order against her allegedly abusive ex-partner.

Her partner had other open cases, and was eventually arrested, but because of a loophole in state law, he wasn’t held through a “dangerousness” hearing.

“He was let go,” the woman, who wished to remain anonymous, told Gov. Charlie Baker and Lt. Gov. Karen Polito during a roundtable discussion at the YWCA in Springfield on Wednesday. Baker and Polito listened as this survivor, and another woman speaking on behalf of another survivor, described their harrowing ordeals.

The Baker-Polito administration has been working to patch the loopholes in the law when it comes to dangerousness hearings. Under Baker’s bill, statutory rape and indecent assault and battery would call for a dangerousness hearing, where a judge decides if a suspect should be held. Others with a history of serious convictions would also be considered. Prosecutors could also file for the hearing if a person out on bail violates its terms.

The woman whose ex was eventually arrested said that the fateful evening began when she, her ex, and their two children went out to dinner. They got into a verbal argument, and she said that he humiliated her and was “very degrading.” Eventually, they were all in the car together, she was driving, when he became very angry since she was making a stop in Holyoke to pick up some takeout for a family member.

“He continued to be very verbally abusive,” she said, noting that this continued as she was driving on I-91 northbound to Holyoke.

“I told him, ‘I don’t want to argue, this is not safe,’” she described, adding that she turned the music back up in the car.

Then, her ex allegedly pulled her hair and the car swerved off the road.

“He punched me in my face,” she described, adding that she could feel her eye swelling and blood dripping down her face. He then took off, taking her phone with him.

Even with her injuries, the woman got back on the road, dropped her kids off at her mother’s home, and went to the police.

“I went back and forth to court within a span of two to three months before I got a concrete restraining order,” she said.

The ex had other pending cases and months afterward was arrested, but wasn’t held via a dangerousness hearing.

“The aftermath is he’s still out there,” she said, adding that her daughter had to go to therapy since she was old enough to understand what happened; her son was too young. The woman carries on with life, gets her kids ready for school, knowing that he’s out there.

“You don’t know where he is,” she said, calling this “very, very discouraging.”

In another case, another woman was pregnant by a man, who demanded she get an abortion, a woman described on behalf of the survivor.

The survivor wanted to continue with the pregnancy. The defendant allegedly “became very upset,” and the woman described that he allegedly beat the woman, and repeatedly punched her in the stomach and attempted to strangle her. He also allegedly threatened to kill her and the child.

At a hearing, the woman learned the man had done similar things to “multiple” other women, and had prior convictions. He was held during a dangerousness hearing, according to the woman.

But the survivor is now anxious because if the case isn’t resolved, he could be let go. He also still finds ways to communicate with her from behind bars. Friends of his will approach her and remind her of what he said he would do.

“We are very thankful for your voices, and the voice on behalf of others, to come forward today to help us explain that to the legislative body,” Polito said. “And we certainly hope that the governor will have the opportunity to sign these changes into law.”

A Fundraising Cocktail at Alcove