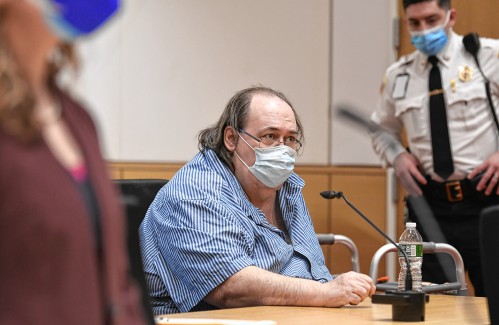 Stephen M. Pontz, 65, was arraigned before Judge Francis Flannery and pleaded not guilty as a formality before changing his plea and being sentenced. He pleaded guilty to two counts of possession of child pornography and four counts of dissemination of visual material of a child in a state of nudity or sexual conduct.

The five years of probation was jointly recommended by Pontz’s attorney, Jonah Goldsmith, and Assistant District Attorney Anne Yereniuk with the Northwestern District Attorney’s Office. The attorneys came to their recommendation based on Pontz’s lack of prior criminal record and his deteriorating physical health, which includes a respiratory illness. Pontz arrived to court with a walker.

Before accepting the recommendation, Flannery told Pontz that probation is a common sentence for possession of child pornography charges, but dissemination charges often result in prison time. He said this recommendation was one of compassion.

“You’re lucky this isn’t in federal court,” Flannery told Pontz. “And I’m sure attorney Goldsmith can vouch for that as well.”

The conditions for Pontz’s probation include completing sex offender therapy, having no unsupervised interactions with children under 18 besides his own children or those he has legally adopted, not working or volunteering with any organization for which such interaction could be reasonably expected, and registering as a sex offender.

Yereniuk read to Flannery a statement of facts backing up the state’s case against Pontz. Police summonsed Pontz to court in March 2021 following a National Center for Missing and Exploited Children cyber tip resulting from an alert from the parent company of Yahoo. Yereniuk said Pontz used online accounts — and occasionally pretended to be an 18-year-old female named Carol — to receive, view and disseminate sexual images of children ranging in age from 1 to approximately 16. An investigation yielded files from 2016 to 2020.

Prior to Thursday’s arraignment and plea, Pontz had been arraigned in Orange District Court before the case was transferred to Franklin County Superior Court.

Goldsmith told Flannery that though there is no excuse for Pontz’s actions, his client’s medical issues resulted in isolation and loneliness.

“He made some very poor choices,” Goldsmith said. “It got out of control.”

Goldsmith said Pontz agreed to plead guilty because he wants to take responsibility for his actions and be held accountable.

“He is very motivated to do that,” he said.

Goldsmith said Pontz has led an otherwise productive life and he has been shunned by the community since these charges came to light.

Yereniuk mentioned there are no known local victims of Pontz’s crimes. Flannery said that while this may be true, these were not victimless crimes. He said Pontz’s actions created the demand for child pornography and, thus, victimization.

Let's See If Your Bread Opinions Are Normal Or Not

We Know How Tall You Are Based On Your McDonald's Order