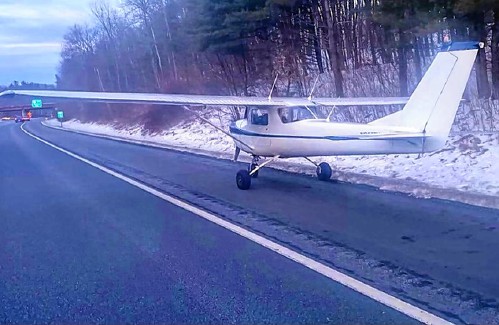 GREENFIELD — A small two-seater plane made a safe emergency landing on Interstate 91 northbound on Wednesday, resulting in no injuries to the two occupants.

According to a tweet from Massachusetts State Police, the plane was experiencing mechanical failure, leading to the emergency landing. There was no crash, and no vehicles were involved.

According to State Police, troopers helped rotate the plane so traffic could pass. The Federal Aviation Administration was advised.

Just before 7 p.m., Whitney said a truck was coming to transport the aircraft to Turners Falls Municipal Airport. He said he heard the plane’s occupants had been flying from New York.

A Look Back: March 3