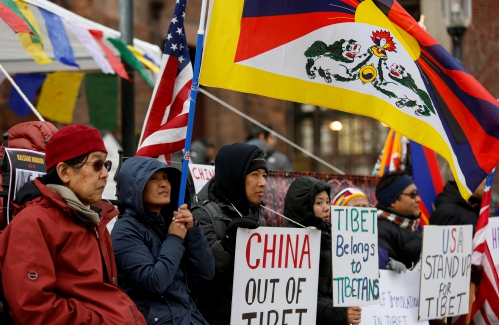 AMHERST — Area Tibetan Americans will mark the 63rd anniversary of the Tibetan National Uprising with a walk from Amherst to Northampton on March 10.

In support of the anniversary, and making a plea for justice, the Amherst Town Council issued a proclamation this week in advance of a commemorative Tibetan flag raising outside Town Hall that morning at 9:30.

The proclamation states that the Regional Tibetan Association, based in Amherst, “urges governments across the globe to take stronger multilateral action in response to unprecedented human rights abuses by the Chinese government” and that the Tibetan Americans in Amherst “have contributed to the diversity of our culture and tradition.”

Council President Lynn Griesemer said residents are invited to come to the flag raising. The flag will remain up through March 20.

Following the ceremony, members of the Regional Tibetan Association will then journey to Northampton.

Amherst will have additional police officers and firefighter/paramedics on duty Saturday for what town and University of Massachusetts officials are calling the “First Weekend in March.”

Town Manager Paul Bockelman said this week that officials are preparing to respond to parties and other events that celebrate St. Patrick’s Day. Students are typically on spring break for the March 17 holiday.

COVID ambassadors will be visiting students living off campus to remind them about responsibilities for keeping the peace. Restrictions on visitors at UMass residence halls also will be in place.

In previous years, UMass has held concerts and other activities to reduce the likelihood for large unsanctioned gatherings. The UMass hockey team also will be playing a home game late Saturday afternoon.

With Ukraine being invaded by Russian troops, an Amherst resident is asking town officials to show support for the country’s people in a tangible way.

Meg Gage of Montague Road told the Town Council this week that one possibility might be to light up Town Hall in blue and yellow, the colors of the Ukrainian flag. Both the Empire State Building in New York and Los Angeles City Hall have created similar light displays.

The situation in Ukraine should be concerning to world peace, Gage said. “I don’t remember a time as terrifying as this,” Gage said.

A $2 million capital campaign for a new Newman Catholic Center building on the University of Massachusetts campus that is under construction recently exceeded its goal.

“Miracles Happen: When Heart Speaks to Heart” has raised $2.05 million from 565 donors. The campaign is covering both construction costs and helping to build an endowment fund for the center.

“Even though we have reached our goal, fundraising must continue through the spring, summer and early fall,” Virginia Webb, Newman’s director of development, said in a statement.

After selling its 1963 building to UMass for $12.5 million in 2020, the church leased the nearby Thatcher Road site from the university and contracted with D.A. Sullivan and Sons to build a 19,000 square-foot building that will include a chapel, a research center with private study rooms, two lounges and a cafe, among other space.

The Amherst Area Chamber of Commerce is holding an in-person annual meeting March 9 from noon to 2 p.m. at the Red Barn at Hampshire College.

Among the speakers at the luncheon will be College President Ed Wingenbach, Michael Gay, the incoming president of the chamber’s board, and Yasmin Chin Eisenhauer, executive director of the Amherst Cinema.

Tickets are $25 for members and $30 for non-members. Go to amherstarea.com for more information.