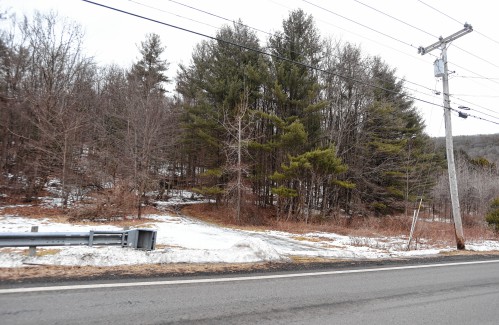 ASHFIELD — After hearing concerns about a company’s plans to create a “memorial forest reserve” for cremated human remains, Planning Board Chair Alan Rice said town planners are not “anywhere near” closing a hearing on the project that opened Wednesday.

The hearing was held to review the special permit application from Eternal Roots, as represented by Berkshire Design Group, for the reserve and stewardship of the 268.5-acre parcel off Conway Road (Route 116). The hearing began with a presentation of the company’s intent by Eternal Roots founder Gavin Yerxa and Berkshire Design Group Principal Jeff Squire. It was followed by an outpouring of environmental, health and legal concerns from both town officials and residents.

Wednesday’s discussion follows a Feb. 23 hearing held by the Conservation Commission, whose role is to protect wetlands. The Planning Board’s hearing will continue April 6 at 7 p.m. via Zoom.

In his opening statement, Yerxa reiterated that his company’s goal is to provide a space where families may “host a small, intimate ceremony where the cremated remains will be mixed with soil and spread at the base of the tree.” He also asserted that Eternal Roots would “work with a qualified land trust … and set aside some revenue” for the benefit of environmental conservation.

Eternal Roots’ notice of intent proposed creating a driveway over a small section of wetlands to give access to the non-wetland forested property. It also plots out culvert replacement and a small visitor’s center surrounded by a gravel pathway and an adjacent 23-space parking lot. During Wednesday’s hearing, the company clarified that the 268.5-acre parcel at the base of Mount Owen would enclose “four memorial areas that contain a total of 10 acres,” as was previously described in their Traffic Impact Summary.

“The calculations we made … looks at roughly 85 trees per acre for the lifespan of the memorial acre,” Yerxa expanded.

In response to the presentation, Ashfield officials and residents expressed skepticism regarding unclear road and culvert dimension delineations, drainage infrastructure to accommodate flooding and mountain runoff, and the sweeping away of ashes by floodwater.

Rice pointed out the discrepancy between the planned road’s original and revised delineations. At the time of the last Conservation Commission hearing, the plan involved having the road clip the edge of an abutting property, something Squire said all involved parties were aware of. Wednesday evening, though, Squire presented a revised plan that showed the road narrowly avoiding the abutting property altogether.

“Why didn’t you just design this to fall within the property line in the first place?” Rice asked, visibly and audibly agitated.

“A lot of it got lost in thinking about a lot of other topics,” responded Squire, now deeming the original plan an “oversight.”

Rice transitioned to the topic of Squire’s culvert replacement plan, arguing that his proposal didn’t adequately clarify the dimensions of the intended culvert and seemed not to be based on sufficient stormwater research.

“Was that just an oversight too?” he asked. “Are you still working that out?”

Squire advised Rice to refer to the stormwater analysis the applicant submitted to the Conservation Commission.

Abutter Mary Jane Johnson said runoff is “like a waterfall coming down this mountain.” Abutter Ipek Kursat maintained the belief that Eternal Roots’ current plan would result in excessive floodwater.

“I am concerned about our property and the protection of our house with this increased runoff,” Kursat said.

Jane Shaney, a Planning Board member who said she watched Hurricane Irene decimate the Mount Owen area, expressed a wariness in the chosen location due to the possibility of a similar event occurring at some point.

“It was pretty devastating,” she said of the storm. “The water rose incredibly high. … I have a lot of concerns about drainage.”

“I think any project is subject to those types of events,” Squire responded. “We do our best to anticipate those, but we can’t construct projects (that can stop a hurricane).”

Shaney continued by invoking the prospect of ashes running across the property with the water.

“The strategy with this was to try to locate this away from critical resource areas and places with a lot of runoff,” Squire said of Eternal Roots’ ash spreading areas.

The discussion also addressed the chemical composition of cremated remains and how their high pH levels might affect the health of both people and the ecosystem. Despite contrary arguments from local environmental experts, Eternal Roots leans on the state website’s statement that cremation “renders ashes harmless, so there is no public health risk involved in scattering ashes.”

“Research has demonstrated that cremated remains are inorganic material that pose no health risks and have minimal impact on tree health,” reads the narrative Eternal Roots submitted to the town.

“To say that they’re not problematic at all is not accurate,” said Marion resident John Rockwell, an environmental planner representing environmental consultant Mary Johnson.

Planning Board members agreed to resume the hearing during their April 6 meeting. Rice requested more resources be brought next time, including an updated set of plans; more images of the visitor’s center, layout and floor plan; a legal analysis regarding ash spreading from Eternal Roots; a “much, much, much more extensive” stormwater analysis; and a consultant and specialist who might be able to accurately outline the effects of such a quantity of scattered ash.