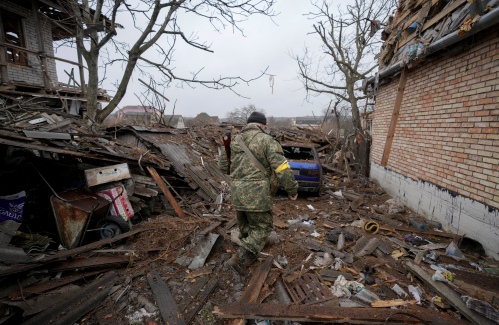 AMHERST — Russia’s ongoing invasion of Ukraine has drawn the focus and worries of people across the world looking for answers as to why Russian President Vladimir Putin is waging war on the country.

To understand the broader historical and geopolitical context, a group of University of Massachusetts professors held a panel Thursday to share their own expertise. Five experts from the fields of history, economics, political science, legal studies and anthropology discussed how the conflict came to be and where it might head from here.

Historian Audrey Altstadt, an expert in Soviet history and nationalities, began by assessing Putin’s assertion that “Ukraine is Russia and Ukrainians are Russian” based on the fact that Ukraine, Belarus and Russia all claim their cultural origins in the 12th century state of Kyivan Rus, centered in today’s Kyiv. She noted that the nation-state today known as Ukraine also has been part of several empires over hundreds of years, including the Mongol Empire in the 13th century and the Polish–Lithuanian Commonwealth in the 17th century.

“My point in all of this is that the use selectively of historical snapshots is misleading,” Altstadt said. “Putin in fact is engaged in political manipulation in this instance.”

Ukrainian identity and nationalism were repressed under the Russian Empire, Altstadt said. The Bolsheviks briefly tolerated nationalism, though soon the Soviet Union too began cracking down on Ukrainian identity. The brutal Holodomor famine under Stalin’s rule in 1932 and 1933 killed millions of Ukrainians, and in 1991 Russian leaders worried about the role an independent Ukraine would have in the post-Soviet world.

The story is complex, Altstadt said. Many Ukrainians and Russians are intermarried, their languages and cultures are close and there is a large Russian minority living throughout Ukraine. Putin’s invasion is in part a reaction to the eastward expansion of the NATO military alliance, as well as economic issues and natural gas sales, she added.

“But Putin’s treatment of Ukraine … has an edge to it” ever since Russia annexed the Crimean Peninsula from Ukraine in 2014, Altstadt said. “And the reason is that the Ukrainian national identity pulls the rug from under a huge piece of Russian history and Russian identity. And that, Putin cannot tolerate.”

Ina Ganguli, an expert on the Russian economy who studied in Ukraine from 2004 to 2005, said that the country has been in the middle of a “tug of war” between Europe and Russia since gaining its independence in 1991.

In 2004, Ukrainians came out for what became known as the Orange Revolution, protesting the corruption of the presidential election that year and leading to a redo election that saw candidate Viktor Yushchenko win over Viktor Yanukovych — a close ally of Russia and Putin who drew his support from his native Donbas region. Yanukovych was then elected president in 2010, but was overthrown in Ukraine’s 2014 Euromaidan protests after he declined to sign an economic agreement with the European Union.

Yanukovych went into exile in Russia and soon after, armed separatist groups in the Donbas cities of Donetsk and Luhansk seized government buildings, drawing Russian military support. It was the two breakaway regions in Donetsk and Luhansk that Putin recognized as independent when he began his invasion late last month.

“People are leaving the country, also from Russia,” Ganguli said. “This is going to be devastating for Ukraine, obviously, but also for Russia.”

Lauren McCarthy, a political scientist who studies the relationship between law and society in Russia, explained that Russia’s pretext for invasion was ending what Putin called the “genocide” of ethnic Russians in the country and to “demilitarize” and “denazify” the country.

“To me this military strategy is very reminiscent of the strategy Vladimir Putin took when he first became prime minister and then president in 1999 against Chechnya,” McCarthy said. “That’s alarming because of Russia’s strategy during that war of targeting civilians to terrorize the population into submission.”

Ukraine’s army and civilian fighting units have put up a fierce fight, McCarthy said, though they are “massively outmanned and outgunned.” Russia has made its major advances in Ukraine’s south, McCarthy said. More than 1 million refugees have fled the country and as many as 2,000 Ukrainian troops have been killed — a likely underestimate, she said.

The destruction “is going to take a very, very long time to rebuild and recover from,” McCarthy said.

“Russian state television since 2014 has delivered a narrative of hostility about Ukraine and about its purported affiliations with the far right and the role of far-right parties in Ukraine” she said, though there was no preparation for an armed invasion of Ukraine.

Friends in Russia have told Hemment that they see this as “Putin’s war and not Russia’s war.” Thousands have come out to the streets to protest, Hemment said — no small act in a country where police are swiftly and violently repressing anti-war sentiment. In total, she said, 7,500 Russians have been arrested for protesting in over 100 cities and towns.

“The conditions to do this, to mobilize, to get out on the streets like this, are extremely challenging,” Hemment said, noting that some are being accused of treason and facing up to 20 years of jail time. “Protesters know this and have been coming out all the same.”

Paul Musgrave, a political scientist studying among other topics U.S. foreign policy, said that although it’s tempting to simply denigrate Putin as “crazy,” he is capable of rationally pursuing goals. His agenda needs to be understood, Musgrave said; he may, for example, see threats to his rule and feel boxed in with war as his only option.

The invasion has unified the West, Musgrave said, which has responded with massive economic sanctions. That has led to the collapse of the value of Russia’s currency and price increases on everything from electronics to medicine.

“It has hurt ordinary people tremendously,” Musgrave said. “That is, of course, the goal of sanctions.”

Those sanctions, however, likely won’t counteract what Russia is doing on the battlefield, Musgrave said, and in the long term the West needs Russia’s economy too. Keeping Russia isolated economically would cause untold suffering for Russians and would undermine a lasting global settlement, he added. He suggested that Russia’s violence may increase in Ukraine and that Putin will also step up repression at home.

Musgrave said that “victory” against Russia would require the humiliation of Putin and Russia, which would have to accept terms that would be unacceptable to them. That, he said, could lead to Russia, which has already brandished its nuclear weapons capabilities, contemplating “even more unthinkable strategies.”

“Actual victory may actually be too costly,” Musgrave said.