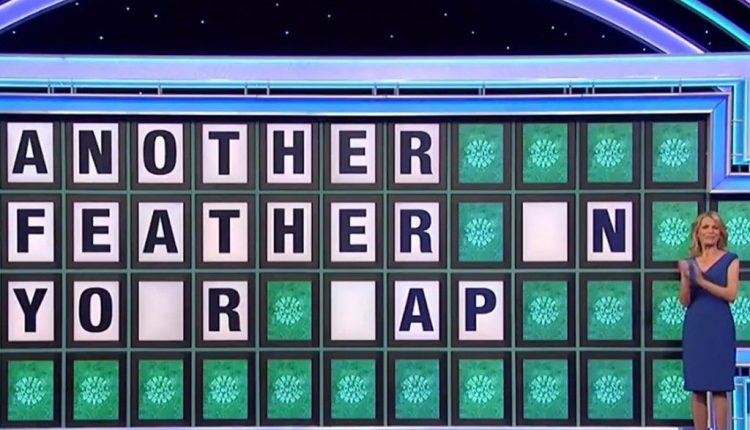 Thomas Lipscomb, a postproduction coordinator from Glendale, Calif., was on his lunch break Tuesday when he got a text from a friend, who asked, “Are you on Twitter?”

That’s never a great question to hear, and when Lipscomb, 25, opened the app, he saw that one of the trending topics — right next to “State of the Union” — was “Wheel of Fortune.” And even without knowing the details, he had a feeling about what might have happened.

Lipscomb, Chris Coleman, and Laura Machado were the three contestants on that day’s “Wheel of Fortune,” which you might have seen by now. In one round, Machado repeatedly botched the answer to the puzzle, which was the phrase “another feather in your cap.” She offered “hat,” “lap” and “map” as the final word. (“The feather is moving around,” host Pat Sajak observed.) And while she kept guessing incorrectly, Lipscomb went bankrupt, while Coleman guessed a couple incorrect letters and then went bankrupt himself, before Lipscomb eventually solved the thing.

The absolutely excruciating sequence of events was quickly captured and posted to Twitter, where the video has been viewed millions of times. Viewers were simultaneously riveted and horrified, and the tweets started streaming in: “The dumbest two minutes in Wheel of Fortune history.” “Tonight’s Wheel of Fortune. I can’t. That round was brutal.” “I’m yelling at the television like I’m watching a football game.”

Soon, Lipscomb was getting bombarded with texts from seemingly every person he has ever met — he’s working on the production team of the Academy Awards in Los Angeles, so the episode started airing on the East Coast hours before he could watch it. “I did not think this would be talked about,” he said.

Indeed, a sort of face-palm moment these contestants had laughed off during taping in December had hit the harsh climes of the Twittersphere and mutated into an internet laughingstock. And like so many viral reality-TV and game-show moments that have come before it in the Internet age — the Homer vs. Homer Simpson mix-up on the U.K.’s “Tipping Point,” every roundup of funny “Jeopardy!” fails, or even the infamous “Wheel” moment when a contestant mispronounced “corner curio cabinet” — it attracted an alarming amount of attention, of both the good-natured variety and the derisive.

On Wednesday, Sajak posted a thread on Twitter, noting that what had happened on Tuesday’s episode was in fact a common occurrence. “It always pains me when nice people come on our show to play a game and win some money and maybe fulfill a lifelong dream, and then are subject to online ridicule when they make a mistake or something goes awry,” he wrote.

“Last night’s ‘Feather in your cap’ puzzle was a case in point. Sitting at home, it seems incredible that they couldn’t solve it, but I knew in real time what was happening,” Sajak’s thread continued. “The first attempted solve was ‘Feather in your hat’ which, by the way, is how a lot of people say it. So all three players thought it was a good solve, and were stunned when I said it was wrong.

“Now imagine you’re on national TV, and you’re suddenly thrown a curve and you begin getting worried about looking stupid, and if the feather isn’t in your hat, where the heck can it be? You start flailing away looking for alternatives rather than synonyms for ‘hat,’ ” Sajak went on. “And, of course, when it’s solved, you want to crawl in a hole. I’ve been praised online for ‘keeping it together’ and not making fun of the players. Truth is, all I want to do is help to get them through it and convince them that those things happen even to very bright people.”

Indeed, after the “feather in your cap” puzzle was solved, Sajak reassured the contestants: “Boy, this stuff happens. You get a word in your head, and then, of course, when you figure it out, you go, ‘Eh! What was I thinking?’ You know?” Sajak said with a laugh. “Anyway, it’s fine. That round is over. But it was fun in a sort of perverse way.” Alas, Sajak’s words came after the end of the video viral clip that’s been circulating.

Coleman, a 30-year-old actor, project manager, and community activist from Los Angeles, used to watch “Wheel of Fortune” with his grandmother, who died in January, and he competed on the show in her honor. According to him, the “feather in your cap” incident was just one of a number of tiny mishaps on set the day the episode was taped — so between reshoots and other technical challenges, it barely registered as something that could become controversial. “Pat was talking to me and my other two contestants throughout the round, saying, ‘Guys, thank you so much for your patience. We apologize for what’s going on,’” Coleman said. (A representative for the show said that Sajak declined to comment beyond his tweets.)

Certainly, the continued failure to guess “cap” was “frustrating for us, because we’re the ones in the moment under the lights, having five seconds to guess the letter or solve,” Coleman said. But Sajak’s on-air quip “made light of it” and helped Coleman move on mentally. Since the taping in December, he said, he hadn’t thought much about the “feather in your cap” misadventure until this week.

“The sad part about it is, most people really don’t realize that idioms are not necessarily something that everyone knows about. An idiom is something that is taught through culture,” Coleman said.

Like Coleman, Lipscomb used to watch the show with his grandmother, which inspired him to audition. He was surprised by the intense reaction the clip received — even though he solved the puzzle, Twitter users have been making fun of everything from his suit to his mustache. But as someone who does stand-up comedy in addition to his day job, he found he enjoyed the attention. He has been gamely replying to tweets and is trying to take his sudden Internet fame in stride.

“I don’t care if I mess up on a game show,” he said, pointing to another moment in the episode where he incorrectly guessed the nonexistent phrase “pecan chestnuts.” “I’m just glad people can see my sense of humor.”

Multiple people sent him a tweet from “Frozen” actor Josh Gad (who just wrote “God help us all” above the clip), but Lipscomb actually didn’t mind. “My niece loves ‘Frozen,’ ” he said, so she was definitely going to be impressed. “Olaf made fun of your uncle!”

“Sometimes you hear someone say ‘Dumb blonde moment!’ or just, ‘Wow, I can’t believe I didn’t get that,’ you know, and they laugh it off,” Coleman said. “But with the internet culture today, people don’t laugh things off anymore. Now we’re having people send hate speech toward us in our DMs.”

Coleman and Lipscomb have talked via Instagram DM as they have experienced this surreal week together; Lipscomb said he’s also been in touch with Machado (who did not respond to a request to be interviewed). According to Lipscomb, she’s had “an amazing sense of humor about everything.”

And Lipscomb said all three are grateful Sajak spoke out in their defense. “It was kind of like our game show dad stepping in to fight the internet bullies,” he said. “I think all three of us are very appreciative that he took the time to write that. It meant a lot.”

That said, Coleman looks forward to putting his involuntary viral-video-star days behind him. He won a trip to St. Lucia on “Wheel” and plans to take his vacation there in September — and not think about the “feather in your cap” clip at all.

Consignment & Resale Shops Near You