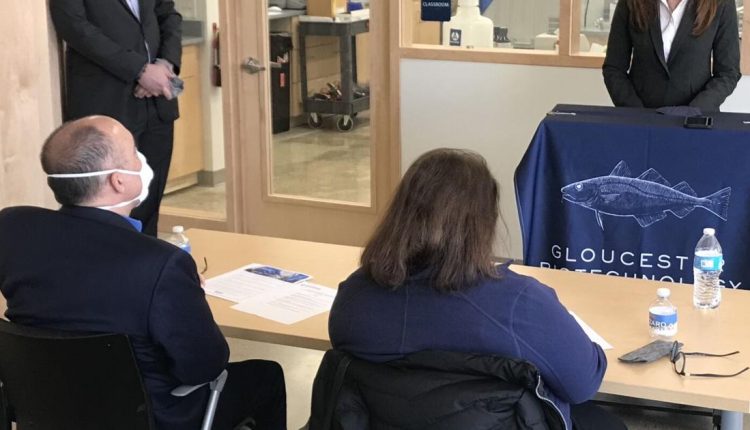 A classroom full of future biotech lab technicians at the Gloucester Marine Genomics Institute’s Biotechnology Academy served as a backdrop Friday as officials from BioConnects New England unveiled a push to create a regional bio-manufacturing cluster in traditionally under-served communities in Massachusetts, Maine and Rhode Island.

The multi-state coalition is a finalist of the Build Back Better Regional Challenge, a $1 billion competitive grant program sponsored by the U.S. Economic Development Administration, an agency of the U.S. Department of Commerce. Finalists can apply for up to a maximum $100 million grant. Officials said they expect to hear about the grant awards in the fall.

The goal of BioConnects New England is to grow and spread out work in bio-manufacturing, which involves making products from living systems, such as those used to make biopharmaceuticals, for example. It see the industry would move away from the traditional high-priced biotech hub of Kendall Square in Cambridge to low- and moderate-income cities such as Gloucester, Worcester and others. Officials hope to close the workforce gap for biotech workers and provide educational and training opportunities along with well-paying biotech jobs in Gateway Cities.

A key component of the effort includes workforce development, a specialty of GMGI, which runs the biotechnology academy at 55 Blackburn Center to train young adults to be lab techs without their having to obtain a bachelor’s degree in science.

“For Gloucester, even the process of it, has increased our visibility, our partnerships and our reach,” said GMGI Executive Director Chris Bolzan about participating in the challenge.

She said if the proposal succeeds, it will enable GMGI to scale up the work of the academy.

“That will not only allow us to increase access to programming to more students and develop a really important educator pipeline to sustain our growth, but it will also allow us to attract more companies to Cape Ann,” Bolzan said.

The leaders of the coalition came to the biotechnology academy to describe their work and spoke with Mayor Greg Verga, state Rep. Ann-Margaret Ferrante, D-Gloucester, and state Senate Minority Leader Bruce Tarr, R-Gloucester, who joined via speakerphone. Others at the event included John Doyle, GMGI Biotechnology Academy’s education director, and Patrick Mitchell, director of apprenticeship and work-based learning at the state Executive Office of Labor and Workforce Development.

“You got one thing wrong when you said that you were honored to work with us, actually we are honored to be working with GMGI and the amazing work that happens here and has been happening here,” said BioConnects New England Lead Jared Auclair, the associate dean of professional programs and graduate affairs in the College of Science at Northeastern University. He was glad Bolzan agreed to join the coalition back in October.

Auclair said there were 529 applicants for grant funding in phase 1 of the Build Back Better Regional Challenge, and BioConnects was one of 60 selected to move on to phase 2 of the grant process, and that 20 to 30 programs will get funding.

“There is really a cool niche there for us to take the cool innovations that happen in Cambridge and Kendall Square and lead them out throughout the rest of the Commonwealth west, north and south,” Auclair said.

“We also need to remember that the focus of this challenge is to build back better, meaning that we will bring along with us those communities that have traditionally been left behind in other recoveries,” said BioConnects New England Lead Alicia Sasser Modestino, a labor economist and an associate professor in the School of Public Policy and Urban Affairs and in the Department of Economics at Northeastern.