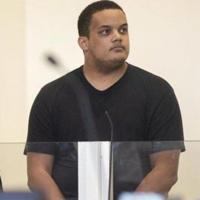 PEABODY — A former TSA agent awaiting trial on charges related to luring teenage girls to late-night meetings is again being investigated over contact with one of the girls, a prosecutor told a judge Friday.

Corey Chambers, 29, of Methuen, is currently awaiting trial on charges that include child rape, indecent assault and battery, enticement of a child, posing a child and contributing to the delinquency of a minor, as well as a witness intimidation charge stemming from contact with an accuser via Instagram, following his 2019 arrest at Logan Airport.

The teenage girls, from Peabody and Haverhill, agreed to meet Chambers at locations in Peabody, where he would provide items like alcohol, marijuana and vaping cartridges in exchange for being allowed to take photos and engage in sexual activity, investigators allege.

Initially, Chambers had been free on $5,000 bail and under conditions, including no contact with victims or witnesses. After the Instagram incident, he was returned to jail and his bail increased to $25,000.

In December, a prosecutor told a Salem Superior Court judge Friday, someone with access to a Snapchat account in Chambers’ name again contacted one of the girls, asking her to “hit me up” and to send nude photos to him in jail.

But Chambers’ attorney, Sara Attarchi, argued that because Chambers was still being held in custody, “he’s not released,” and, she reasoned, and thus not subject to conditions of his release on bail that had been set in his two cases.

Karp said it “seems to me it makes sense that if a defendant violates a condition of release, it should be actionable.”

But it was not clear, procedurally, how the prosecutor could proceed. Reisman argued that there should be ramifications for failing to follow a court order.

She also said the jail is still investigating the incident and told Karp there may be a new witness intimidation charge against Chambers on the way.

With Chambers still not expected to make bail, the prosecutor asked to withdraw the warrant for now.

Attarchi, who had previously scheduled Friday’s hearing as a “lobby conference” to discuss a potential plea in the case, instead asked Karp to schedule a trial as quickly as possible.