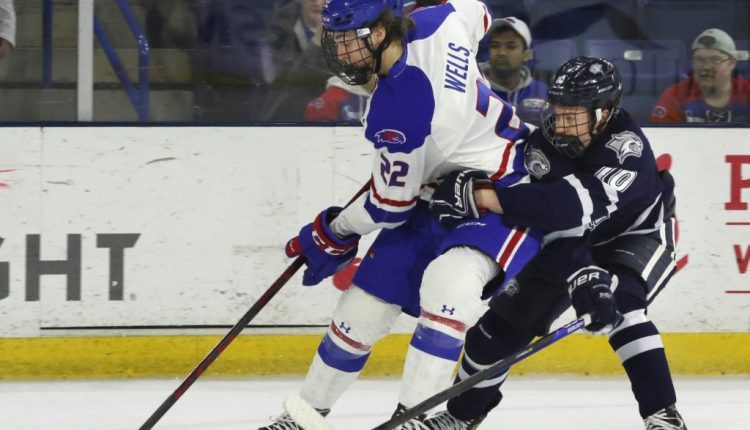 LOWELL — They were picked to finish seventh in Hockey East. They ignored the outside noise.
Saturday night, inside a raucous Tsongas Center, the River Hawks created plenty of noise from a standing room only crowd of 6,234 on Saturday night.
Thanks to 23 saves from Owen Savory and a goal from Carl Berglund, UMass Lowell nipped New Hampshire, 1-0, to finish with 46 points, tying UMass Amherst atop the Hockey East standings.
If Merrimack defeated Northeastern in a late game Saturday, UML would finish with a share of the league title, but the Minutemen would win the tiebreaker to earn the No. 1 seed. A Merrimack win would make UML the No. 2 seed. UML couldn’t finish lower than the third seed.
Either way, the River Hawks earned an opening bye and will host a winner-take-all quarterfinal game Saturday at the Tsongas. UML will play at either 1:30 p.m., 4:30 p.m. or 7:30 p.m.
Savory notched his fifth shutout of the season. With David Fessenden pulled for a sixth skater, UNH nearly tied it, but Savory slid over to reject Tyler Ward with 1:25 left.
No. 16 UMass Lowell (20-8-3, 15-8-1) reached 20 wins for the seventh time under head coach Norm Bazin, the first time since the 2016-17 season.
“I’m proud of the guys. I’m really proud of the effort tonight because we had to gut it out,” Bazin said. “A lot of blocked shots and that was one of the points of emphasis for the weekend.”
Berglund’s second-period goal stood as the winning goal.
“We just want to keep improving and be the best team we can be at the end of the year. Hopefully we have a lot of hockey left,” Bazin said.
Regardless of where the River Hawks finished at the end of Saturday, Bazin said he was proud of his team. A weekend sweep of New Hampshire has the River Hawks positioned to make a playoff run.
Seniors Lucas Condotta, Reid Stefanson, Jon McDonald, Sam Knoblauch and Savory were honored before the game along with grad students Connor Sodergren and Nick Austin.
The River Hawks had the better of the play during a scoreless first period, outshooting the Wildcats by an 11-3 margin, but the hosts couldn’t sneak a puck past backup goalie David Fessenden, who got the start over Mike Robinson.
UNH received the first power play, but it was negated just 11 seconds later thanks to tenacious work by Zach Kaiser, who was held by defenseman Colton Huard.
Stefanson, set up by Condotta, had a quality bid just over three minutes in, but Fessenden rejected the shot. Later, a Condotta pass to Owen Cole barely eluded the freshman near the left post.
UML took a 1-0 lead into the third period, but it was almost a two-goal lead.
With Luke Reid in the penalty box for holding and the River Hawks on the power play, Sodergren fed the puck to Stefanson in the right faceoff circle. Stefanson ripped a one-timer headed to the top right corner, but Fessenden snared it out of the air with his glove. Stefanson had scored a goal in his previous three games.
UML’s Swedish connection combined for the lone goal of the first 40 minutes.
A shot deflected to Berglund and he wasted no time sending a shot high into the UNH cage 1:21 into the second period for his seventh goal of the season and 22nd of his career. Assists were earned by Andre Lee and Isaac Jonsson.
It was the 62nd career point for Lee, the 60th for Berglund.
Savory stood tall later after the River Hawks were called for a too many men on the ice penalty. Bazin credited Savory with making timely saves in the final period.