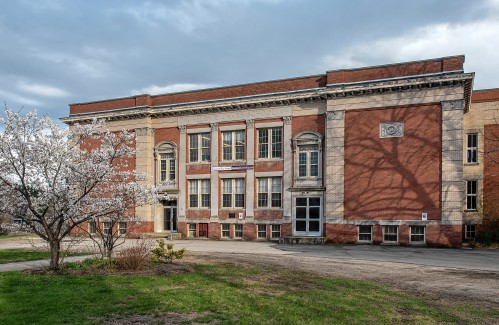 WILLIAMSBURG — Both the demolition of the former Helen E. James School and the construction of a public safety complex on the site have gone out to bid, with bids due on all aspects of the project this month.

He also said that “a good number of people” have downloaded bid documents.

Rob Todisco is the project manager for the construction and demolition effort.

“It’s been a long time waiting, that’s for sure,” he said.

Todisco said that even though construction costs have climbed around the country, the town has made decisions about the project that he hopes will allow the numbers to come in where they need to be.

“The town should be incredibly proud of the work that’s been put in to date,” Todisco said.

The decision to demolish the former Helen E. James School and build a public safety complex on the property was made last year after years of study, with Town Meeting overwhelmingly approving the $5.1 million project.

Named after a 19th-century philanthropist, the Helen E. James School opened in 1914. It ceased operating as a high school in 1971 and as an elementary school in 2014.

The Public Safety Complex Building Committee will be briefed on March 23 and April 6 on the bids that come in and will review them. The committee is tasked with recommending bids for the approval of the Select Board, with two of the board’s members serving on the committee as well.

“We are entering into an exciting time for the project,” said William Sayre, a member of both bodies.

The town had representatives of firms interested in bidding on the demolition portion of the project in last Wednesday to look over the site.

“So far things are looking good,” Sayre said. “There seems to be interest.”

Sayre noted that a Norway maple that was taken down for the project is being turned into commemorative plaques and coasters for the town’s 250th anniversary, and that additional trees are being removed this month by the Highway Department.

The Select Board will also be learning about different borrowing scenarios for the project from Caccamo and Treasurer Nathan Roswarne at its March 10 meeting.

The Recorder – Chapel rededicated at Thomas Aquinas College in Northfield

Fire official: Cause of Salisbury blaze may never be determined | News