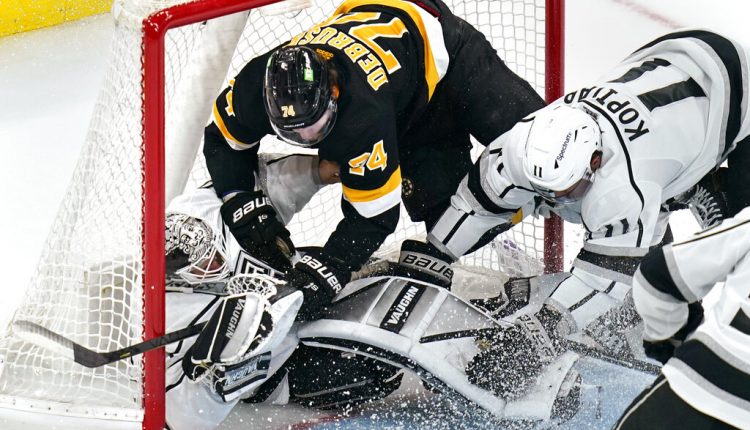 BOSTON  — Trevor Moore tied the game with 26 seconds left in regulation, and Andreas Athanasiou scored on a breakaway in overtime on Monday night to lead the Los Angeles Kings to a 3-2 victory over the Boston Bruins.

Boston never trailed in regulation, taking a 2-1 lead into the third period thanks to a goal and an assist from Craig Smith.

But with the goalie pulled in the final minute, the Kings won a faceoff in the offensive zone and Moore slid home a rebound to tie it. Cal Petersen stopped 30 shots and Blake Lizotte also scored for the Kings, who have won eight of their last 10 games.

But Lizotte tied it just over a minute later.

The game was scoreless until the puck bounced over Kings forward Phillip Danault’s stick in the defensive zone and Smith picked it up, skated in and shot. The rebound came out to Charlie Coyle, who quickly pushed it over to Frederic.

The Kings tied it just 69 seconds later when Olli Matta fed Lizotte in the slot to make it 1-1.

It stayed that way until just under a minute in the second, when Coyle worked the puck against the boards and centered it to Smith for the goal.

Fire official: Cause of Salisbury blaze may never be determined | News