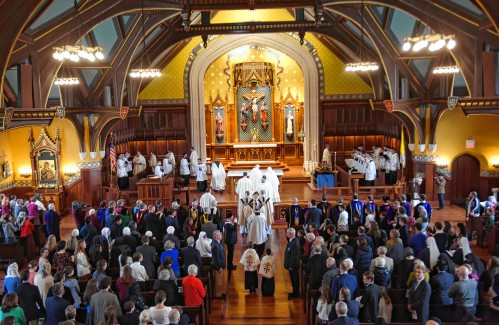 The Recorder – Chapel rededicated at Thomas Aquinas College in Northfield

NORTHFIELD — At least 300 people donned their Sunday best as Bishop William Byrne, of the Roman Catholic Diocese of Springfield, visited Thomas Aquinas College on Monday for the rededication of the Our Mother of Perpetual Help Chapel.

The bishop celebrated a 2½-hour Mass inside what was formerly the Sage Chapel and administered the sacred rite of dedication of a church and an altar, sprinkling the building with holy water, anointing its altar and walls, and blessing a newly installed icon of its patroness, Our Mother of Perpetual Help, a Byzantine icon believed to have originated during the 13th to 15th centuries. The college, with its flagship campus in California, acquired in 2017 what had been Northfield Mount Hermon School’s Northfield campus and held its first semester in the fall of 2019.

The chapel was designed for Protestant worship and built in 1909 on what was then the campus of the Northfield Seminary for Young Ladies. The college has gradually renovated the chapel for Catholic use — adding a central aisle, confessionals, the Stations of the Cross, two altars, a tabernacle and a reredos (ornamental screen or wall behind an altar) in the sanctuary.

In his homily, Byrne thanked those associated with Thomas Aquinas College for inviting him and for their work and commitment.

“The vision that you’ve created … and brought here to western Massachusetts is a great gift,” he said.

Byrne was joined at the altar by the Revs. Greg Markey and Carlos Viego, as well as alumni priests and local clergy. The Thomas Aquinas College Choir provided sacred music for the Mass from the choir loft. As the singers harmonized for the processional hymn, the bishop and clergy carried down the central aisle the relics of St. Thomas Aquinas and St. John Henry Newman. Gifts from the college’s California campus and Cardinal Raymond Burke, respectively, the relics were eventually placed in the altars during the Mass.

Michael McLean, president of Thomas Aquinas College, took to the podium to welcome Byrne and handed him the chapel’s designs.

“In doing so, we place the college and the chapel in your service, for our faculty, staff and students, and you and the good people of the Springfield Diocese,” McLean said.

Byrne then started the Mass by blessing water and sprinkling it on the chapel’s congregants and walls. According to the college, the sprinkling serves as “both a reminder of our baptism and as a sign of repentance.”

Later in the Mass, the bishop poured sacred chrism, a perfumed oil Byrne consecrated on Holy Thursday, on five engraved crosses of the altars, in the middle and in the four corners, signifying the Five Sacred Wounds of Jesus Christ, and then he anointed the altars in their entirety. The bishop then left the sanctuary and anointed with sacred chrism the chapel walls’ 12 crosses, which symbolize the sure foundation of Christ’s 12 apostles.

Next, five heaps of incense mixed with wax tapers were placed on the altar’s five crosses, and Byrne placed the mix into a censer and incensed the altar. The chapel was incensed by altar servers. The burning incense symbolizes the prayers of the faithful ascending to heaven.

The altar servers then wiped the top of the altar and covered it with an altar cloth so candles could be arranged to be lit as symbols of Christ. Servers took the light and illuminated the 12 dedication candles in the location Byrne had anointed.

The date of this chapel rededication was particularly poignant, as March 7 is the Feast of St. Thomas Aquinas, according to the pre-1969 Roman calendar. March 7 is also the date in 2009 when the college’s Santa Paula, California chapel, Our Lady of the Most Holy Trinity, was dedicated. March 7 will now be a sacred date on both campuses.