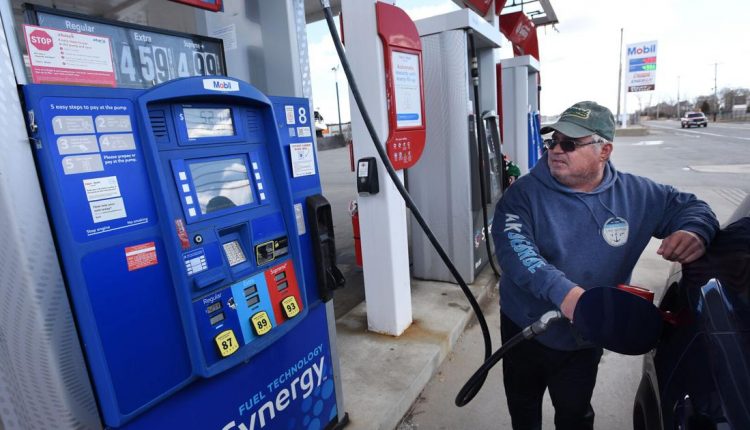 Baker under pressure to put brakes on gas tax | News

BOSTON — Gov. Charlie Baker is under pressure to suspend the state’s gas tax to help ease the pain at the pumps amid skyrocketing fuel costs.

A perfect storm of supply chain disruptions, high inflation and Russia’s invasion of Ukraine have sent gasoline prices soaring to record levels in the past week.

“Massachusetts families and businesses are already being slammed by inflation that’s the highest it’s been in over 40 years. This is a quick and easy way Beacon Hill leaders could demonstrate that they actually understand the realities that are facing many people in the commonwealth,” said Paul Craney, a spokesman for the Massachusetts Fiscal Alliance, a conservative group.

“They have the tools to help, now they just need to show a will,” he added.

The rising gas prices have also become an issue in the gubernatorial race, with Republican candidate Chris Doughty calling on Beacon Hill to suspend the gas tax.

“We need relief from the skyrocketing prices across the board, and the state has a clear way to help by putting a holiday on the gas tax during this current crisis,” Doughty said in a campaign statement. “This would provide an instant savings to our families trying to make ends meet.”

Geoff Diehl, a GOP candidate for governor who in 2014 helped tank a law that would have indexed the gas tax to inflation, made a similar demand to suspend the levy. He also called for a suspension of the motor vehicle excise tax.

Baker, who is in Utah on vacation this week, hasn’t indicated if he will suspend the tax, but recently suggested it may be an option.

“If we were to do something short-term, that would probably be the place we would go,” Baker said at a briefing last week.

House Republicans are expected to file a proposal this week to suspend the gas tax but it’s not clear if the Legislature’s Democratic majority will take it up.

Gas prices in Massachusetts shattered records Tuesday after rising to an average of $4.24 per gallon, according to Mary Maguire, a spokeswoman for the American Automobile Association of the Northeast.

That’s an increase of 62 cents in the past week, she said, and breaks the state’s previous record of $4.08 a gallon, set in 2008 in the midst of the Great Recession.

“I’ve never seen gasoline prices skyrocket as quickly as they did over the past week,” Maguire said. “It’s really been a dramatic increase.”

In New Hampshire, which is normally a haven for cheaper gas, motorists are paying an average of $4.07 a gallon for gas, the highest in state history, according to AAA. The previous record was $4.04, set back in 2008.

The state’s gas tax generated nearly $800 million in 2019, according to the Department of Revenue. The money goes toward fixing roads and bridges, and other projects.

Overall, Bay State drivers pay a total of 44.9 cents per gallon in gasoline taxes, including state and federal taxes and other fees, according to the American Petroleum Institute. That puts it below the U.S. average of just under 49.3 cents per gallon in total taxes, the group says.

The pain at the pumps is only likely to increase following a decision by President Joe Biden on Tuesday to block imports of Russian oil, natural gas and coal.

Biden has already imposed economic sanctions on exports of technologies to Russia’s refineries and a proposed gas pipeline from Russia to Germany.

In remarks Tuesday, Biden acknowledged that the latest round of sanctions will drive up gas prices even higher.

“Russian aggression is costing all of us,” Biden said in a televised address announcing the ban. “Since Putin began his military buildup along the Ukrainian borders, the price of gas at the pumps in America went up 75 cents, and with this action it’s going to go up further.”

Biden said his administration is taking steps to offset “Putin’s price hike,” including the release of 60 million barrels of crude oil from national reserves.

Democratic lawmakers have proposed that Biden suspend the 18.4 cent federal gas tax for at least a year to help ease the pain for consumers.

To be sure, Russian oil makes up a small amount of the nation’s imports. The U.S. imported 20.4 million barrels of crude oil from Russia in 2021, about 8% of liquid fuel imports, according to the Energy Information Administration.

“We need to make this ban permanent so that we can finally separate ourselves from the Russian oil funding the corruption and human rights abuses of the Putin regime,” he said in a statement.

Markey said the rising gas prices are a “clarion call” to accelerate the shift to renewable energy “so that we are never again complicit in fossil-fueled conflict.”

Kendra Scott Teams Up For Her First Influencer Collaboration