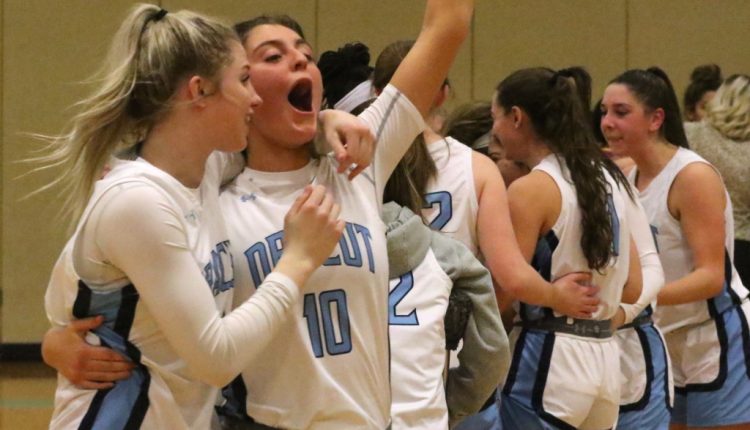 Ashley Talbot turned it up a notch when it came to crunch time.
The junior point guard netted a team-high 21 points, including 16 second half points, as the sixth seeded Dracut girls basketball team bumped off No. 11 Chicopee, 59-52, in the second round of the MIAA Division 2 State Tournament, March 8 at Dracut High.
With the win, the Middies move to the Elite 8 and will face third-ranked Oliver Ames, date, and time TBD.
“It feels great,” said Talbot, whose team improved to 21-3 on the season. “Last year we didn’t get a chance to make it this far. We lost in the second round. So I think this third round we really have to come out strong. I know we’re playing a great team, so we really have to work hard. If we keep up the pace and play hard defense, I think we can do pretty well.”
Dracut held court in the first half, fueled by the heady play of Talbot and senior forward Cam Watkins 912 points), holding a 27-26 lead at halftime.
The Pacers regrouped in the second stanza embarking on a 11-0 run that left Dracut flat-footed at times. Senior Yamirelis Matos (nine points) helped spearhead the comeback, forcing the Middies to regroup. Dracut closed the gap to 41-38 to end the third quarter – before outscoring its opponents in a 11-6 run in the fateful fourth quarter.
“They kind of surprised us,” said Witts. “They gave us different looks on us, the halfcourt zone trap, they full court pressed us. We weren’t prepared for that. We fixed it, got back into it, and the kids stepped up for us.”
Junior forward Emma Felker found her way in three-point land burying a game-high four, including a pair in the second half. Talbot took over from there, the junior guard generated 16 second-half points while going a perfect 6-for-6 from the floor, to put Dracut ahead to stay.
According to Chicopee Coach Michelle Lanford Walkowlak, the game came down to the fundamentals.
“We missed all our free throws and layups and they made theirs,” said Walkowlak. “I’m proud of the way that we played, but we can’t win a Sweet 16 game if we miss layups and free throws.”
The coach also felt the team’s long road trip may have also played a factor but wasn’t going to use that as an excuse.
“It took us two quarters to really settle into our game,” she said. “That third quarter was our game, and that’s how we play. We just didn’t put four quarters together.”
According to Dracut Coach Peter Witts, the key to the game was the defensive effort in the fourth quarter.
“We had to start to lockdown on defense,” Witts said. “We changed to a 3-2 zone, a little match-up there and in third quarter, and the kids executed on defense. We started to get them tired. They had tired legs. Their shots weren’t falling. That was a big difference there.”
And when it came to clutch shooting, it doesn’t hurt to have Talbot looming in the offensive zone.
“She hit some big shots down the stretch that (extended) our lead and made it more comfortable and easier for us,” said Witts.
One thing’s for sure, Talbot wasn’t about to go out without a fight.
“I knew this could be our last game of the season, and I wanted to end it on a good note,” Talbot said. “Win or lose we had to play well. And I knew if we played hard there would be good things to come.”