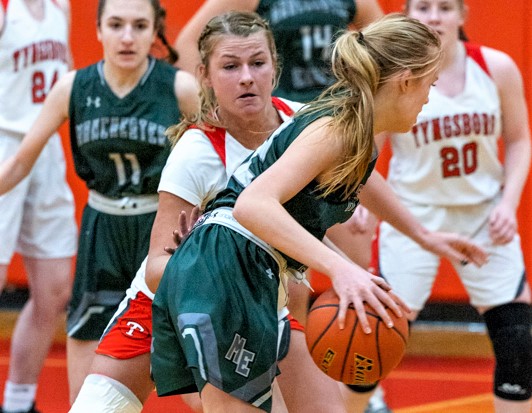 Jane McGuire was unconscious scoring 29 points, including five from three-point land, as the 12th ranked Hamilton-Wenham girls basketball team edged fifth-rated Tyngsboro, 58-56, in the second round of the MIAA Division 4 State Tournament.

Tyngsboro came to play, with three Tigers reaching double-digits in scoring. Brynn Goulet kicked the offense into gear netting 11 first half points, including an impressive 7-for-11 showing from the floor. She, along with the heady play of Rebecca Lyons (15 points) helped build a 37-33 edge at the intermission. Gianna Donato generated 16 points, including 11 in the second half, giving her club reason for optimism. But nothing was going to stand in Maguire’s way. The four-star varsity General netted 13 points in the first quarter alone, setting the tone of the game.

Bishop Feehan pulled out all the stops on the court, Tuesday night.

Despite Westford grabbing an early 11-9 lead at the end of the first quarter (11-9), the 12th ranked Grey Ghosts lost a tough battle to fifth rated Bishop Feehan, 51-42, in the second round of the MIAA State Tournament.

Trailing early in the contest, Feehan was able to claw its way back clinging to a 27-25 lead at halftime. The Shamrocks expanded its lead to as many as 10 points in the second half, only to see WA fight back to close within three. Fenwick still managed to pull it out, however, hitting several backbreaking free throws to clinch the victory.

“I was really proud of the team tonight,” said Coach Russ Coward, whose team capped the season at 14-7. “We played them Feb. 23 and they beat us by 31.  (Fenwick) is big, fast and physical, and we did a great job of matching their intensity.  It was also the most physical game I have seen our team play in a long time, and though obviously I’m sad we lost, I think we really showed everyone our worth.”

Kaylin O’Meara potted 13 points, but it wasn’t enough as the No. 11 Littleton girls basketball team was bumped off by sixth-ranked Malden Catholic, 54-39, in the second round of the Division 4 State Tournament.

The Tigers offense was fronted by O’Meara and Hannah Cochran (nine points). Littleton, which ended the season at 15-7, advanced after beating No. 22 Bourne, 65-28, in the first-round match-up, March 4.

Ashley Dinges had 39 points and 20 rebounds, as fourth-rated Central Catholic dispatched 20 seed North Andover, 61-43, in the second round of the Division 1 State Tournament.

Lenny Veloz (six points) stood out defensively for the Raiders, helping build a 28-22 lead at halftime, while holing the Knights to just nine points in the third quarter.

30 Photos That Prove That Indians Have Absolutely Zero Chill