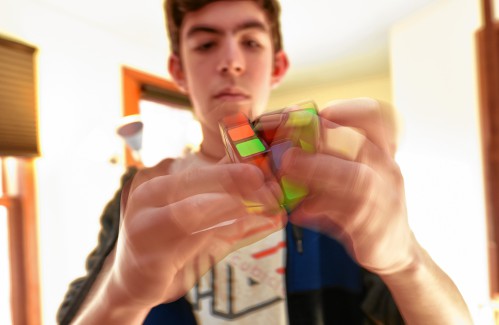 SOUTH DEERFIELD — Having forged a friendship after meeting at a competition at Boston University in 2019, two local students have organized a speed cubing competition of their own at Deerfield Elementary School on Saturday.

Elijah Phelps, a 14-year-old freshman at Frontier Regional School, and Amherst-Pelham Regional High School sophomore Levi Gibson have been close friends since that chance meeting, during which they discovered they live only 11 miles from each other.

“We got each other’s emails and kept in touch, and the rest is history” Elijah said of his first time meeting Levi three years ago. “He’s the best cubing friend I have.”

Speed cubing is the practice of quickly solving a cube with a combination puzzle — with the most common being the traditional three-by-three Rubik’s Cube. At competitions, competitors come from all over the region to compete in several different cube formats to see who can solve the puzzles the fastest.

After attending competitions from Boston to Maryland, Elijah said he and Levi wanted to host one a little closer to home. He added they had been planning to do so for several years, especially after hosting some online competitions over the course of the COVID-19 pandemic.

Now, rather than traveling hundreds of miles to compete, Elijah is hoping to draw people from around the country to South Deerfield for a tournament of his own on Saturday.

Elijah said his choice of venue came to him when he was standing in line at a COVID-19 booster clinic at Deerfield Elementary School. With a location in hand, he said the “hardest part was finding the date,” but beyond that, he and Levi quickly organized the tournament and came up with a schedule. The tournament will be held from 9 a.m. to 7 p.m.

“Me and Levi brainstormed the schedule while I was making mac and cheese in the kitchen,” Elijah said.

With everything set up, Elijah said the World Cube Association — the governing body of the hobby’s competitions — officially sanctioned the tournament and posted it on its website, which Elijah noted was “really cool.”

“When I first saw the competition listed on the website,” he said, “it was insane to see it there and see people interested.”

Within five minutes, the competition’s 70 spots were filled and an additional 80 people were placed on the waiting list. No spectators will be allowed at Deerfield Elementary due to capacity limits amid the pandemic.

While this competition is full, Elijah said he’d like to organize future events in the area in hopes of drawing more people to the hobby while minimizing his own travel distance.

For Elijah personally, his interest in cubing started in 2018 when he first learned how to solve a Rubik’s Cube. He said he takes joy in “the art of improvement and solving puzzles.”

“I was never really into it until I saw someone else do it,” Elijah said. “A friend at school could solve it in a matter of seconds. I was really interested.”

Like many people picking up new interests, Elijah said he thought it would be a short-lived hobby, but his vast collection of cubes in his room tells another story.

“I’ve been in and out of other hobbies,” Elijah said. “I think this is going to stick for a while.”

He added his parents have been supportive in helping him delve deeper into the hobby.

“He’s a really cool cubing dad,” he said of his father, Eric Phelps.

After extensive practice, Elijah said he was interested in entering a competition, where he a found a welcoming community that encourages everyone to improve.

“The cubing community is really supportive,” he said. “Cubing is not fun without other people.”

In competitions, Elijah said he normally averages around 8 to 9 seconds when solving a Rubik’s Cube, but his personal record at home is 3.79 seconds.

“It was the luckiest scramble (randomization of squares) I’ve ever gotten,” he said, “and I took advantage of it.”

He said much of the process of solving the puzzles comes from memorizing algorithms and identifying those patterns by looking at the puzzle before beginning — in competitions, competitors are given 15 seconds to look over a cube.

“I look for the white edges,” he said, adding much of the actual solving of the puzzle happens “in the moment.”

Looking ahead to Saturday, Elijah said he’d like to top his personal competitive record of 7.43 seconds in the traditional Rubik’s Cube format.

Una Pizza Napoletana Is Back