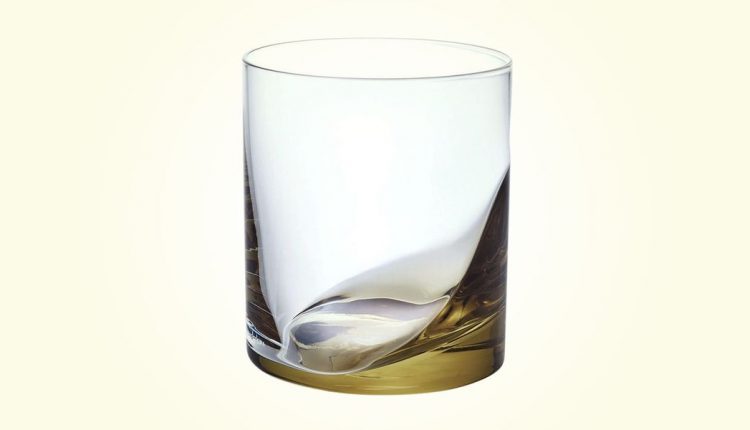 The pomp and circumstance that goes into drinking—sorry, snifting then sipping—a glass of scotch is disproportionate to the scotch itself. Yes, we love a good bottle of single malt (American, Japanese, or Scottish). We’ve fallen for an exceptional blended release (Johnnie Walker High Rye, come through). That doesn’t mean scotch is liquified gold that bestows upon its drinker the gift of precognition, or permanent eight pack. It’s a liquid. Go ahead and drink it out of a watering can or a chipped diner mug. It’ll taste pretty damn good to your average whiskey drinker, no matter the vessel.

However, we are all about surrounding ourselves with nice things, which includes the things that go on or near our home bars. And glassware? It can be downright gorgeous, which certainly amps up the whole scotch-drinking aesthetic. So we suppose the rule is: As long as you don’t swirl your dram for two minutes before sniffing, gargling, swishing, and swallowing a single sip, then intone to the person nearest you about peat and sherry cask for an additional five minutes, you’re not a pompous asshole for buying special scotch glasses.

Now, a quick word on scotch glasses in particular, for the uninitiated. Basically, you’re looking for rocks glasses, or old-fashioned glasses, as scotch is nearly always drunk straight, or with a few drops of water, or over ice. Think short and stout. Anything called a “whiskey glass” will work beautifully. But these 11 scotch glasses will work best of all.

Waterford, of the fine-crystal realm, has a more accessible line of glassware called Marquis by Waterford that features this entirely classic (and still very affordable) design. You can’t go wrong.

If there were ever a “scotch glass,” technically speaking, it’d be the Glencairn glass. Its tulip shape was designed in Scotland based off the nosing glasses used at distilleries, stuffing all those aromas up your nostrils so you can really differentiate pear from burnt vanilla.

An updated (but not too updated) take on classic glass tumbler design, the pattern cut into these Italian pieces shows off whiskey just right.

Ralph Lauren serves up homewares that feel timeless but modern, as is its gift, with these double old fashioned glasses proving the rule.

There’s something about holding a heavy glass, bearing the weight of all that good whiskey, that feels nice. This tumbler has heft, as well as a design that best suits it for chilled scotch—by a giant ice ball, a few ice cubes, or a few whiskey stones.

This blown glass stunner has roots in Denmark and Japan. The studio that created it is based in Copenhagen, and it was created with Japanese Kingyo goldfish in mind, as you can see from the spots of orange and blue-grey. Imagine the way those’ll play off the amber liquid. Not to mention the 22-karat gold inlaid into the glass.

Japan’s SGHR Sugahara crafted this glass in its Kujukuri studio, with a flowing, falling golden design that’s worthy of a museum. Or another pour. Drink Japanese whisky from this one.

Speaking of taking the stuffiness out of scotch-drinking. These Oaxacan tumblers are low to the ground, irregular in shape, and appear to be verging on something close to whimsical.

For the minimalists in the crowd, these Zwiesel Glas pieces cut a fine figure and are on the smaller size, meaning six won’t cram up your cupboards but will supply a game night or dinner party.

Finally, you can do the whole scotch-tasting shebang. This tasting glass is specially crafted to stave off the alcohol burn, with a metal base to keep the whiskey cool and a leather coaster, because coasters are important. Just remember: Gauge interest before sharing your findings.

Sarah Rense
Sarah Rense is the Lifestyle Editor at Esquire, where she covers tech, food, drinks, home, and more.

Mass. public health commissioner says we’re in a ‘much better place’ with COVID