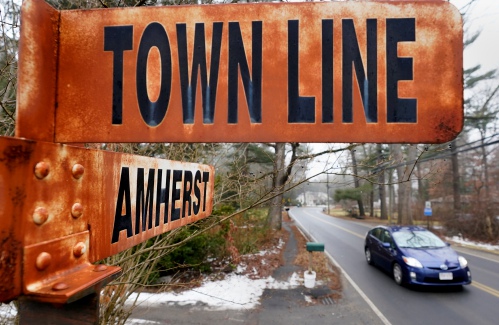 AMHERST — A longtime Amherst resident is asking the Town Council to bring a referendum to the November 2023 election ballot that would change what he terms the town’s “odious” name.

Vincent O’Connor of Summer Street used the public comment period at a recent meeting to ask councilors to rid the town of its association with Lord Jeffery Amherst, who commanded British troops in North America during the French and Indian War.

O’Connor observes that Amherst College changed its mascot from Lord Jeffs to Mammoths several years ago to distance its relationship with the 18th-century figure who historians say advocated using blankets infected with the smallpox virus against Native Americans.

Under his proposal, voters would have a list of new names from which to choose on the ballot, and the top vote-getter would become the town’s new name.

While he understands that other names have been discussed, such as using a tribal name from Native peoples who lived on the town’s land, or Emily for poet Emily Dickinson, O’Connor said he would like to see the new name be more inclusive. Among his suggestions are Harriet, for Harriet Tubman, an abolitionist and conductor for the Underground Railroad; and Sumner, for Massachusetts U.S. Sen. Charles Sumner, a leader in the anti-slavery movement.

In August 2017, a Belchertown resident made a similar appeal in writing to the former Select Board and the town’s legislative delegation, as well as other local legislators.

Amherst was named in 1759 when it separated from Hadley.

Zachary Wilson, director of retail for the business, said in a statement to the chamber that Pleasantrees aims to bring “more access and awareness to communities disproportionately affected by the war on drugs.”

The business is located at the former site of Rafter’s Sports Bar and Restaurant, which has been significantly renovated for the business.

It is the third adult-use retailer in town, alongside RedCardinal on College Street and Mass Alternative Care on University Drive. Rise, on Meadow Street in North Amherst, sells only medical marijuana.

As the Joint Capital Planning Committee reviews projects that can be funded through the town’s capital account, Department of Public Works Superintendent Guilford Mooring said a major expense in future years could be replacing the poolhouse at War Memorial Pool.

The pool was rebuilt and reopened in 2012, but the cinder block poolhouse, part of the memorial for military service members, dates to 1955. Squirrels now make their home in the upper reaches, he said, and mold and mildew are prevalent.

“It’s just a building that needs to go away,” Mooring said.

He said the process will start with a design. The hope has been to build a new poolhouse as part of a comprehensive overhaul of Community Field, where an aging wading pool was demolished in 2015 and a basketball court continues to deteriorate, with limited play structures available for families.

“We know it’s going to be a multiyear process, we just need to start,” Mooring said.

The Racial Justice Committee of the League of Women Voters of Amherst will have a presentation by the African Heritage Reparations Assembly on Sunday.

Members of the assembly will discuss their work to study and develop reparations and proposals that will benefit people of African African backgrounds.

The Zoom event runs from 1 to 2:30 p.m. Visit lwvamherst.org to register.

“Reading Early Epitaphs in Amherst’s West Cemetery” is the topic of John Hanson’s lecture, taking place at noon at the Woodbury Room at the Jones Library.

The Recorder – VA medical center for the ax? VA secretary expected to include Northampton facility on closure list