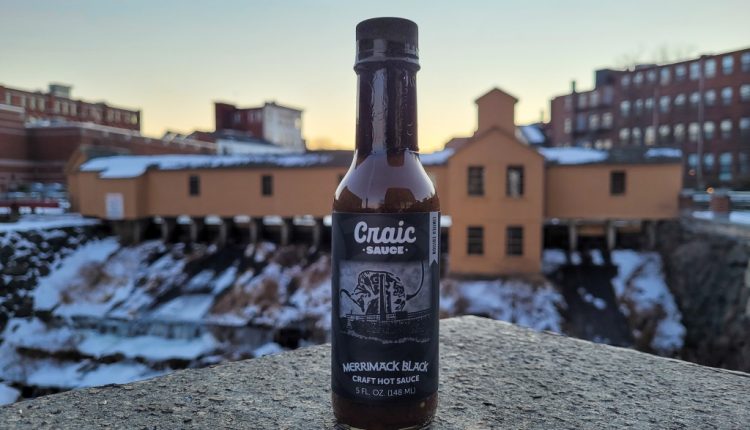 LOWELL — Corned beef, soda bread and potato soup are classic dishes for any St. Patrick’s Day feast, but where does hot sauce fit on the table?

Brian Ruhlmann might have the answer. The Irish food entrepreneur packages “fun and good times” in the form of Craic Sauce, a Lowell-based hot sauce company with strong Irish origins, in name and spirit. “Craic” is Irish slang for “entertainment” or “social gathering,” and the brand itself was launched on St. Paddy’s Day back in 2018.

“Good craic is kind of our guiding light,” he said.

To commemorate the holiday, Ruhlmann is introducing a new hot sauce to the lineup called the Merrimack Black. With chocolate scorpion peppers and black garlic from F-Word Farm in Dracut, a classic English porter from Navigation Brewing Co. and label illustration by Andre K Mills at Western Avenue Studios, the dark sauce is a local team effort that took an unconventional approach.

Emily Makrez, owner of F-Word Farm, grows a variety of hot peppers on her property, including the chocolate scorpions that inspired the flavor of the sauce. To incorporate the flavor of the English porter in the sauce, Makrez thought to turn the beer into vinegar because of its black peppery taste and range of other flavors. That process took about seven weeks, and preparing the black garlic was an eight-week-long endeavor.

Perfecting the sauce was involved, but Makrez said it turned out “really awesome.”

“It’s bringing some good heat for sure, but it’s kind of a sweet-sour teriyaki sauce almost, with a good amount of heat,” Makrez said. “There’s a lot of effort and time that went into the sauce, outside of just growing the hot peppers for it, but I think it resulted in a really beautiful outcome.”

Last St. Patrick’s Day, Craic Sauce introduced its Brian Boru’s Curry, made of turmeric scotch bonnet peppers and sungold tomatoes. These special releases, marking an Irish cultural celebration, are personal for Ruhlmann, who lived in Dublin for three years and has an Irish passport.

But this year’s sauce is especially significant — it coincides with the 100th birthday of Jack Kerouac, a famous Lowell native and Beatnik writer with whom Ruhlmann has a longtime connection.

“Through reading Jack Kerouac in my travels and when I was a little younger, I’ve had some transformational experiences while reading some of his books,” he said. “I’ve always kind of struggled with reading, but for some reason, just his narrative really made (for) some of the most enjoyable reading that I’ve had.”

It was after hearing about the Jack Kerouac Foundation’s efforts to establish community spaces for local artists and musicians that Ruhlmann decided to donate 100% of the Merrimack Black proceeds to the organization.

“I think it’s important for us to give back and especially back into Lowell and the arts in our community,” Ruhlmann said.

The foundation is currently working to fund and establish a Jack Kerouac museum and performance center at the St. Jean Baptiste Church, where Kerouac’s funeral was held. Jim Sampas, CEO of the Jack Kerouac Foundation and literary executor of the Jack Kerouac Estate, said this anniversary is important, given Kerouac’s upbringing in Lowell and how the city influenced his writing.

Sampas said it is the support and interest from the community that will help them “introduce Jack to a whole different generation.”

“The ‘100th’ is a milestone that can be a catalyst to the whole thing, to get folks more interested in the work,” Sampas said. “This support is just invaluable, and we’re so, so incredibly grateful for it.”

Craic Sauce prepared around 300 bottles of the limited-time sauce, which Ruhlmann said he expects to “be gone in a week.” They’ll be publicly available for purchase at the Farm Market at Mill No. 5 on Sunday. The company will privately kick off the Jack Kerouac Foundation fundraiser on March 19.

Other Craic Sauce offerings can be found for purchase on their website, as well as on restaurant tables around Lowell, including at Gormley’s Cafe, Cobblestones and The Old Court Pub.

PJ Mercier, co-founder and owner of Navigation Brewery, said pairing his beer with hot sauce proved to be “a match made in heaven.” But joining forces with Craic Sauce really came down to supporting another local business.

“One of the things we always wanted to do, and being local to Lowell, was always help out by networking and promoting other people’s brands,” Mercier said. “It’s a cool beer. It’s a cool sauce.”

Everyone Is A Character From Euphoria And A Carb