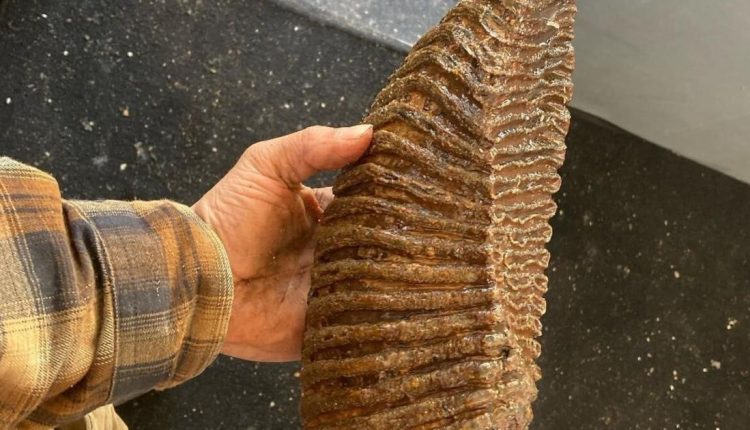 NEWBURYPORT — New England Fishmongers caught quite a surprise when one of its fishing boats scooped up a woolly mammoth tooth off the coast of Plum Island late last year. Now, the company is auctioning off the fossil to help Ukrainian refugees.

Kayla Cox, a co-owner of the Kittery, Maine-based company, said the Finlander II was trolling for scallops about two miles off Plum Island when it ended up catching the fossilized tooth in December.

William Clyde of the University of New Hampshire studied the 7-pound, 11-inch fossil, which he said could be about 12,000 years old.

Clyde said mastodons, mammoths and other, now-extinct animals called Greater Newburyport home when the sea level was lower 12,000 years ago.

He also said that scallopers off the coast of Newburyport can find woolly mammoth fossils on occasion.

The tooth has been on display in a seawater tank at the New England Fishmongers’ new Kittery restaurant since its discovery.

“The people who come into the restaurant can get a good look at it. It’s not something you see everyday and we were joking that it was our ‘pet rock’,” Cox said. “We’ve caught some old glass bottles before but nothing like this.”

The recent Russian invasion of Ukraine has, however, prompted Cox and company to put the fossil up for auction on eBay at www.ebay.com/itm/203858685430?hash=item2f76ecadf6:g:JN8AAOSwLORiJMQE.

The money raised by the auction will be donated to World Central Kitchen, which is providing hot meals to Ukrainian refugees, as well as those still on their home soil.

“We wanted it to aid a good cause as opposed to just keeping it or putting it in a museum,” Cox said.

Cox did some online research and found that a woolly mammoth fossil could net between $900 and $1,200. So, she started the bidding at $700 over the weekend.

The fossil was bidding at $9,600 shortly before 5 p.m. Friday. The auction, which ends Sunday shortly after noon, has a lot of watchers, according to Cox, who also said she is hopeful the bidding will increase as the deadline approaches.

Rainwear company Helly Hansen has pledged to match the final bid up to $2,000, while also sending $3,000 worth of rain gear and boots to Ukrainian refugees, according to Cox.

“I’m interested to see what happens. I know that most of the big bids come in at the last minute,” she said.

Learn more about World Central Kitchen at its website, https://wck.org/.

Cooks Are Sharing Ingredients That Pale In Comparison To The Real Thing, And I’m Shocked