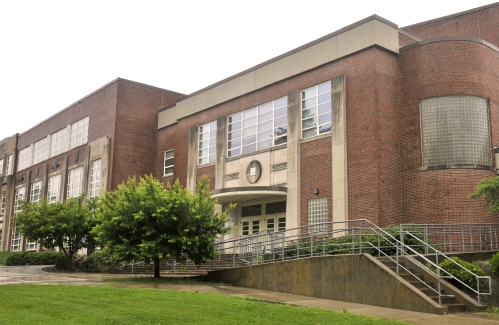 NORTHAMPTON — Controversy over Northampton High School’s embedded honors math program has played out at School Committee meetings in recent weeks, but public records compiled by former committee member Susan Voss show the dispute has been ongoing for more than a year.

Voss gathered about 260 pages of emails and other communications from 2020 and 2021 between Principal Lori Vaillancourt and teachers in the math department, as well as parents, students and members of the School Committee, and wrote a seven-page “overview” criticizing the decision to eliminate the stand-alone honors math program last year and offer only embedded courses in ninth and tenth grades.

Voss told the Gazette that she also found “shocking” messages, such as Vaillancourt referring to one group of students as “asshats,” for which the principal has now apologized.

An embedded honors program puts honors and non-honors, or “college prep,” students in the same classrooms but with different performance expectations. College prep students are mentored by honors students and they can try the honors material to challenge themselves. Each student chooses either the honors or college prep track on their own.

The change has been controversial since Vaillancourt revealed it at a School Committee meeting on Feb. 11, 2021. She told the committee that students and caregivers “really appreciated” the one embedded honors math class that was being offered at the time, which Voss described as “misleading.”

“The public had no opportunity or awareness that this change was happening, to come speak, and many of the community members probably didn’t realize the extent of this change because they don’t have kids in the high school yet,” Voss said. “There was no evidence of caregivers and students being appreciative of that. None. … What is actually shown (in the report) was that numerous students and caregivers had real concerns.”

Reached on Tuesday, Vaillancourt said she had not seen Voss’ report, completed in October 2021, and the Gazette shared a copy with her. She disagreed with the suggestion that the document provides a full understanding of the move to embedded honors, which had been in the works since 2015, and disagreed with Voss’ interpretation of key facts.

“This type of informal communication between colleagues can be taken out of context and can be misunderstood,” Vaillancourt wrote in an email to the Gazette, adding that the bulk of the discussions did not take place over email or through other publicly available written records.

“Once the math department incorporated embedded honors classes during the pandemic, the department felt committed to the practice and asked to continue the practice rather than return to homogeneous groupings of honors and non-honors students,” Vaillancourt wrote. “Voss’ interpretation that the email and chat report represent numerous concerns of students and caregivers is grandiose.”

According to Vaillancourt, the school conducted a survey at the same time that the embedded honors program was being implemented, finding that 70% of students and 70% of caregivers said NHS courses were rigorous enough to prepare for college and a career, and 13% of students felt they did not have access to advanced courses.

“The School Committee typically hears from caregivers who want to air complaints; therefore, there can be a skewed view,” Vaillancourt wrote. “Stakeholders do not often reach out to share successes and/or what is working in our schools. Furthermore, the complaints represent the views of folks who have the resources and the ability to communicate with the school committee.”

Voss said the dispute was the reason she did not run for reelection to a third term last November. She said she originally ran to support STEM education, but during her tenure, “it became increasingly apparent that the leadership of our school system has different priorities” and that “meaningful conversations are stonewalled and retaliated against” through the use of “derogatory language.”

In a March 14, 2021, message to Schardl on a school chat account, Vaillancourt referred to members of the Student Union who wanted to meet about embedded honors as “asshats.” About a minute later, the principal wrote, “Keep talking equity and they will be in our camp. They are mad because they weren’t part of the decision making.”

The Student Union is a student-run organization that promotes communication with administrators.

“I recognize that referring to students in any pejorative ways is inappropriate,” Vaillancourt told the Gazette this week. “I used language in reference to some students trying to set up a meeting that stemmed from frustration. In reflection, I recognize that I diverted from my values and I apologize.”

Vaillancourt said she did speak with Student Union members, and “our conversation ended with one student stating that they (the student union) were absolutely convinced about embedded honors being an equitable and best practice.”

The Student Union did not respond to a message seeking comment.

Last month, 11 NHS educators signed an open letter calling on the School Committee to apologize for Ward 4 member Michael Stein’s use of the phrase “second-class learners alongside first-class learners” while airing his own worries about the psychological impact of embedded honors on college prep students.

Right after Stein’s comment during a Feb. 10 public meeting, Vaillancourt said she “cannot tolerate that type of depiction of our learners and our students.”

The School Committee issued a statement apologizing for Stein’s comment on Feb. 28.

On Tuesday, Superintendent John Provost told the Gazette that he has read Voss’ report and found that it showed “a math department wrestling with questions of equity and inclusion in the context of the learning disruptions caused by COVID 19.”

He wrote that some of the emails and chat messages lack context and that anyone who is “curious about this topic” should review the original documents and judge for themselves.

Asked about Vaillancourt’s “asshats” comment and other messages between teachers that Voss’ report describes as “unprofessional and disrespectful references to caregivers,” Provost offered an apology on behalf of the school district.

“My expectation is that all staff would use respectful language when responding to disagreement and dissent, including in their internal communications with colleagues,” Provost wrote in an email to the Gazette.

“The hundreds of pages of emails included approximately 5 communications between staff that I felt were not appropriate. The tenor of these was that the opponents of embedded honors were families of economic privilege,” Provost wrote. “This is a stereotype with which I do not agree, and I apologize for the assumptions implied by these comments.”

On March 3, 2021, about three weeks after Vaillancourt revealed the change, the Northampton Youth Commission emailed a statement to the principal, Provost and the School Committee. The Youth Commission is the official city body responsible for representing young people.

“We believe that the embedded honors program should NOT be implemented this year. This program was presented with zero community input,” the statement reads. “The Northampton Youth Commission, Student Union, the entire student body, parents and many if not all of the school committee members were completely unaware of this change until it was presented a few weeks ago.”

The statement contends that “any data or feedback” collected during the COVID-19 pandemic would not reflect student experiences in a typical year. The Youth Commission asked for the change to be delayed to allow for community discussion.

In the emails collected by Voss, teachers and Vaillancourt refer to “equity” several times when explaining the decision to students and each other. Voss’ report criticizes the use of the word as “manipulative” and vague.

“The math department and Northampton Public Schools are sincerely committed to equity,” Vaillancourt wrote to the Gazette, denying Voss’ claim. “Embedded Honors/Non-Honors classes is a practice rooted in equity. Our School Improvement Plan and District Improvement Plan is focused on equity and access for all learners. As educators all of our decisions are made from a lens of equity and access.”

The district, Provost wrote in an email, is “unified” in its sincere commitment to student equity.