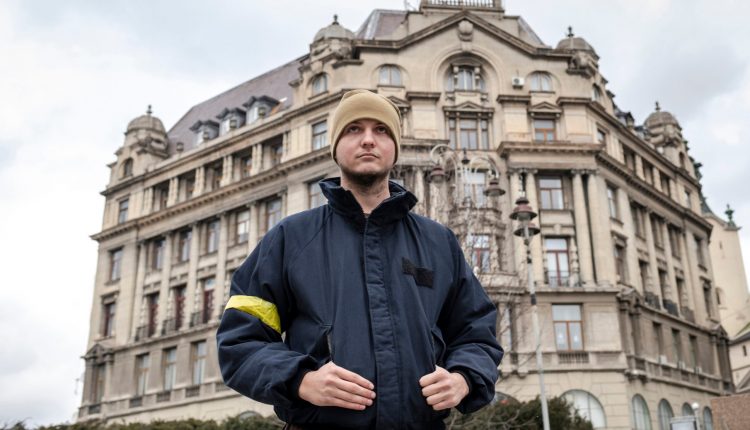 Lane Perkins arrived at the Ukraine-Poland border last week to a crush of traffic. Cars and buses crammed with refugees rolled west. Ambulances and foreign fighters, like him, ventured east.

To the south, near Ukraine’s border with Romania, Zachary Burgart and Mark Turner wrapped up a six-day mission that began with delivering medical supplies and took an unexpected turn when authorities, suspicious that the two Americans were Russian saboteurs, arrested and interrogated them.

They are among the wave of U.S. military veterans who, despite warnings from the Biden administration, have inserted themselves into a foreign war. Some, like Perkins, want to take on the Russians directly. Others, including Burgart and Turner, have sought less risky ways to get involved, offering military and first-aid training, hauling humanitarian supplies, and setting up contacts for future American volunteers to assist Ukrainians.

“This,” said Perkins, a Navy veteran who resides in San Diego, “is a noble cause.”

While President Joe Biden has said repeatedly and emphatically that U.S. troops will not be pulled into the conflict, the government of President Volodymyr Zelenskyy has actively recruited Western military veterans to join its newly formed International Legion of Territorial Defense of Ukraine. An estimated 20,000 foreigners have expressed interest, the Ukrainians say. About 4,000 are Americans, said an official with the Ukrainian Embassy in Washington, who spoke on the condition of anonymity because the issue is seen as highly sensitive in Washington. It’s unclear how many may follow through.

Americans’ involvement in the war will probably stretch beyond Zelenskyy’s foreign legion, however. Some, like Perkins, are interested in joining other Ukrainian groups that come with fewer strings attached. While certain outfits require applicants to surrender their passports and make a long-term commitment, others allow volunteers to leave if they need to return home for family and work obligations, he said.

But regardless which group Americans may join, they face significant risk. A Russian Defense Ministry spokesman, Igor Konashenkov, has characterized outsiders aiding Ukrainian forces as “mercenaries,” saying anyone who is caught “at best” can expect “to be prosecuted as criminals.”

The Biden administration has strongly discouraged American military veterans from joining the fight. Instead, Pentagon spokesman John Kirby has suggested it would be wiser to donate to agencies responding to the humanitarian crisis.

“We still do not believe that Ukraine is a safe place for Americans to go,” Kirby told reporters at the Pentagon. “We urge them not to go. And if any are still there, we urge them to leave.”

In interviews, U.S. veterans detailed a variety of motivations for joining the effort. Some expressed horror at imagery appearing to show Russian forces indiscriminately bombing Ukrainian civilians. Others said they want to prove themselves in combat after missing out on such opportunities during their military careers.

“For me personally, this feels so unprovoked,” said Burgart, who saw combat in Iraq while serving in elite Marine Corps reconnaissance units. “It’s just insanity to me. I don’t want insane people to be able to do insane things in the world.”

The practice of Americans intervening on another nation’s battlefield dates back generations, said David Malet, who studies foreign fighter movements as a professor at American University in Washington, D.C. He cited such involvement in the Spanish Civil War in the 1930s, the Israeli War for Independence in the late 1940s, and the more recent campaign against the Islamic State in Iraq and Syria.

Generally, becoming a foreign fighter is legal in the United States, Malet said. So long as Americans do not take up arms for a violent group that opposes the U.S. government, there are few restrictions.

But in a war as volatile and complex as this one, the direct involvement of Americans could come with unintended consequences, Malet said, expressing concern that some may be tempted to join far-right Ukrainian militias, or wind up captured or killed. Either scenario would give Russian President Vladimir Putin a significant propaganda victory and potentially arouse support within Russia for an attack on NATO countries. The worst-case scenario, Malet warned, is an incident that helps propel the United States to join the conflict.

Already, Ukraine’s recruitment pitch has caused some waves in the United States.

In recent days, three U.S. military veterans carrying weapons and attempting to join the war effort have been detained outside the Ukrainian Embassy in Washington, police said.

In one instance, two men were arrested after authorities grew concerned about them standing outside the embassy and stopped their vehicle as they drove away. One of them, Stephen Jay Struthers, 49, was arraigned after police found he had a shotgun, brass knuckles, a machete, and other weapons in the car.

In another case, Angel Raymond Luna, 30, was arrested outside the embassy after police noticed him putting on body armor and standing at attention while draped in an American flag, according to a police affidavit. He pleaded guilty Monday to a single count of attempting to carry or possess an illegal firearm, a misdemeanor, and received a 45-day suspended jail sentence, six months of unsupervised probation, and a requirement to complete 30 hours of community service.

Luna said in an interview that he once deployed on a peacekeeping mission to Kosovo, but he “has never had a real chance to defend” the United States. A military spokesman, Lt. Col. Matthew Handley, confirmed Luna’s deployment and said he served as a supply specialist in the North Carolina National Guard from July 2011 to February 2019.

“I don’t know how I could look myself in the mirror if I didn’t go,” Luna said. “I don’t want to die, but this is my belief, my values.”

Born in the Army town of Fayetteville, N.C., Luna settled in Nebraska after leaving the military and was working in a Walmart warehouse when Russia invaded Ukraine. He packed his belongings, stopped in North Carolina to see friends, then traveled to Washington with two firearms, tourniquets, and other supplies, he said.

Luna arrived at the embassy about 3:20 a.m. and decided to stand at attention outside overnight as a sign of respect. At the last second, he also slipped on his body armor. “That was stupid,” he assessed, noting that it caught the attention of Secret Service officers.

Luna still intends to go to Ukraine, though he may have to complete his community service first.

Perkins, the Navy veteran, expressed a similar sentiment. To get to Ukraine, he traveled thousands of miles from Southern California, missing his son’s second birthday. But the sight of the chaotic border crossing, he said from the western city of Lviv, was validation that he had made the right choice.

Many of the other U.S. veterans Perkins has met in Ukraine served in combat, he said. As a former Navy boatswain’s mate, he has not.

Perkins said he wanted to join the Kurdish-led fight against ISIS in Syria but was too young at that war’s zenith. Aspirations of joining the French Foreign Legion were derailed to start a family, he said. The war in Ukraine has arrived at a moment he could put his sense of righteousness to work, Perkins said, despite the corresponding family hardships.

Perkins emphasized that many volunteers are headed to noncombat roles, underscoring the need for specialties that reach beyond fighting. Some are focused on first aid. Others volunteered to pluck children and the elderly from besieged areas and spirit them to safety across the border.

Angelique Osmon, a college student and Army veteran, also thinks the risks are worth it.

As a soldier, she deployed once each to Iraq and Afghanistan while serving as a generator mechanic from June 2009 to December 2015, said Madison Bonzo, an Army spokeswoman. After leaving the military, Osmon assisted Kurdish forces against the Islamic State as a foreign fighter, she said. She now plans to travel to Ukraine through Poland.

“As a Jew, we’re called to repair the world, and this is really the only way I know how,” she said, calling herself a “part-time freedom fighter.”

Osmon said that she could be assigned in a city or “in the trenches” in a forest outside Kyiv, Ukraine’s capital. She knows she will need body armor and a rifle, she said, and plans to obtain them after arriving in Europe. Stories have circulated of Americans having their body armor confiscated while traveling.

“We know that we will be given a weapon, but as far as the other gear, we will have to source that ourselves,” she said, speaking earlier this month from her home in Denison, Texas. “I think that there will be an influx of volunteers, some of them good, some of them not so much.”

Turner and Burgart, the Marine Corps veterans, said they traveled after Yuri Shpylei, a Ukrainian American friend from their Jiu Jitsu gym, decided he wanted to see his family. The trio flew from Chicago on Feb. 27, three days after the invasion, arriving in Bucharest before making their way over the border from Romania. They stopped at five drugstores, amassing boxes of medical supplies that they carried into Ukraine on foot.

Burgart said that he and Turner relied on their shared background in military reconnaissance to set up points of contact in Ukraine to help other Americans coordinate. People in Shpylei’s hometown were comfortable with them, but they were arrested while scouting for a potential warehouse in a neighboring community. Authorities there had detained four suspected Russian saboteurs that morning, they told the Americans.

“A cop car nearly slammed into the front of our car, and they ran at us with AKs,” Burgart said, using shorthand for the ubiquitous Kalashnikov service rifle. “After that interrogation, they hugged us, thanked us and told us how much they appreciated Americans coming out on short notice.”

They spoke with The Washington Post from Romania, after departing Ukraine, saying that, while they will not become foreign fighters, they intend to return and help in other capacities.

“Service to me isn’t just to country, it’s to people,” Turner said. “We have a skill set to help people, and it wouldn’t sit right just sitting at home and knowing that you could help.”