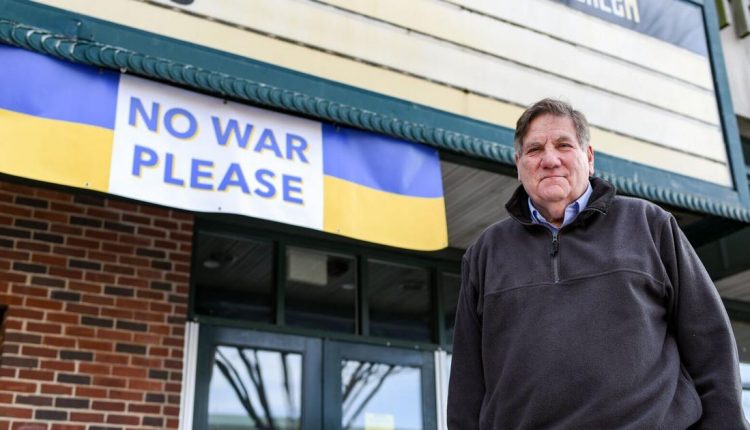 SALEM — Marshall Strauss wants “no war, please,” and his movie theater is helping spread that message.

On Sunday, Cinema Salem will provide what’s believed to be the American big-screen debut of “The Guide,” a 2014 Ukrainian film that tells the story of the genocide of Ukrainians at the hands of Soviets in the early 1930s.

The debut precedes a national rollout of the film as theaters and the movie industry at-large also starts using it as a platform for raising awareness of the nearly decade-long ongoing Russo-Ukrainian War. That conflict exploded in recent weeks with a full-scale invasion of Ukraine by Russia, a sequence of events that have plunged global markets and energy sectors into chaos.

The movie tells the tale of the Holodomor, also known as the Great Famine and Terror-Famine, that caused an estimated 3.9 million Ukrainian deaths by starvation, and prevented the births of another 6.1 million Ukrainians.

“That disaster was eclipsed by other disasters beginning to form in Europe in the 1930s,” said Strauss, who co-owns Cinema Salem with his wife Elaine Gerdine. “Now, it’s all coming back in tragic fashion today, in front of all of us.”

This week, the words “NO WAR PLEASE” appeared on the marquee hanging over the theater’s Church Street entrance, alongside a Ukrainian flag. The phrase is a nod to Andrey Rublev, a Russian tennis star who wrote “NO War Please” on the lens of a television camera broadcasting his match live to the world in late February.

“It’s not about my match, how it affects me,” Rublev said to media after the match. “What’s happening is much more terrible. And like I said, you realize how important it is to have peace in the world and to respect each other no matter what, and to be united.”

Strauss said the moment inspired him to take action and do more with it as the phrase went viral around the world. It carried echoes of efforts he was involved in decades earlier to bring human rights documentaries to Russian TV in the 1990s, as well as efforts to protect exiles from the Tiananmen Square massacre. He recalled efforts in 1989 to identify “Tank Man,” an unidentified Chinese man who famously stopped a column of tanks leaving the square by standing in front of them, a sequence of images widely recognized today across the globe except for within China.

“We couldn’t track down that person, though our research suggested that he was eventually killed,” Strauss said. “That man in front of the tanks is such a photograph. The child in a village in Vietnam running from napalm is one such moment.”

“NO WAR PLEASE,” Strauss said, is this generation’s moment.

Tickets are free, though donations are both encouraged and being solicited through the event, according to Strauss. Proceeds will benefit selected nonprofit organizations being actively identified by the Harvard Ukrainian Research Institute. To RSVP, visit tinyurl.com/5n6v88dh.

Moving tickets has been no issue, according to Strauss. By mid-day Thursday, efforts were underway to open a second screen for the film due to the initial screening being sold out.

At the time of the theater’s announcement Tuesday, it was said Sunday represents the film’s first-ever showing in the U.S., but Strauss said he doesn’t know if that’s changed in the past few days. Since his announcement, he said the movie has crossed the radars of some major players in the entertainment industry.

“The showing of this film in Salem on Sunday will occur just before a national rollout,” he said. “The cinema industry is coming together to begin showing this film on (Friday) March 18. All ticket revenue from across the country will be donated to Ukrainian humanitarian relief.”

The screening will also include remarks from Oles Sanin, the film’s director. He has pre-recorded a message but will attempt to appear live by video from Kyiv, Ukraine’s besieged capitol.

“We’re working with him,” Strauss said, “with the very real possibility that the internet link to Kyiv will be cut by the Russians.”

John Andrews, founder of the Creative Collective and frequent Cinema Salem partner, said the conflict also gives the arts their moment to shine and respond to the crisis in Ukraine.

“The power of the creative community has always provided hope and healing throughout the world,” Andrews said. “Any attention we can focus on Ukrainian creators is something we can get behind.”

Andrews said he also views the situation as an obligation — much like Strauss.

“With the ongoing devastation to the artistic and cultural assets of Ukraine, we felt it was our obligation to do what we can to support in this time of crisis,” he said. “We’re supporting cinema in any way we can.”