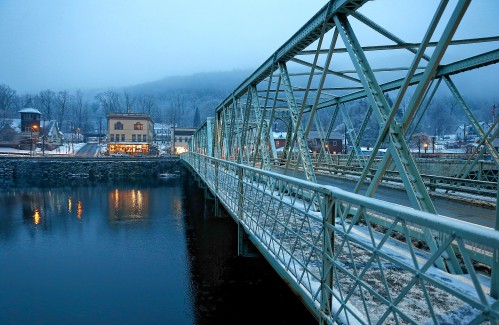 The Recorder – Shelburne Falls, Deerfield Academy to host filming for Miramax’s ‘The Holdovers’ next week

SHELBURNE FALLS — A year after welcoming television crews for “Dexter: New Blood,” the village will be turned into a film set once again next weekend, but with less disruption anticipated.

On March 18, Honest Scholars Production LLC and Miramax crews will descend on the village for a day of filming for “The Holdovers,” an upcoming comedic drama about an old professor at a prestigious New England academy who bonds with a 15-year-old student and the school’s cook as they spend winter break at the school. The film has cast Paul Giamatti in the lead role.

“There’ll be some dizziness down there,” Shelburne Selectboard member Andrew Baker said about the production. The day of filming, the Iron Bridge will be closed from 11 a.m. to 11 p.m. and drivers will be asked to make a detour on Routes 2 and 112 if they wish to get to the other side of the village. “This is essentially a one-day closing. … This is not a major disruption.”

The production will be filmed on the Shelburne side of the Iron Bridge, with the majority of filming happening around 14 Bridge St. and the Good Spirits Liquor Shoppe on Water Street. The full filming plan can be viewed at bit.ly/3i3yMqN.

Baker said town officials have “had a couple of good planning meetings” with the film crew and “they’ve been very responsive” to concerns.

As this is the second time in two years that Hollywood has come to Shelburne, Baker said the town needs to “strike a balance” in allowing filming to occur as everyday life can quickly be upended by traffic closures and film cameras.

“It’s always an interesting project to be a set for a movie,” Baker said. “I think the question for towns going forward is, if you have too much of it, you stop being a town and you become a movie set.”

Baker added that the goal is to “not essentially rent out a town to be a movie” as “people still want to use the town.”

While disruptive, film crews can be generous when they visit small towns. Last April, crews for Showtime’s “Dexter: New Blood” spent around $900,000 at Shelburne Falls businesses over the two weeks they were there.

The production will be contained to the Shelburne side of the village as Honest Scholar Productions pulled its film permit from Buckland, where it was planning to film at McCusker’s Market.

Addressing the permit at a March 9 Selectboard meeting, Buckland Town Administrator Heather Butler said it had been “a bit of a wild ride” with the company over the past week as it mulled pulling the permit over logistical filming issues with trees.

“Ultimately, they decided to take their show across the bridge,” Butler said, adding that the company honored the $1,500 permitting fee. “It’s a win for everybody.”

Production will also take place at Deerfield Academy on March 12, where scenes will be filmed in and around the main building, according to the school’s Director of Communications Jessica Day.

The movie’s IMDb.com page states the film takes place at Deerfield Academy, but Day said this is actually a piece of misinformation that has been spread around since the movie was announced last summer. She said places like the town of Deerfield and Deerfield Academy have the quintessential New England feel, which inspired the screenplay.

“The guy who wrote the screenplay (David Hemingson) knew Deerfield and liked Deerfield,” Day said. “He had Deerfield in mind as he wrote his script, but it’s not about Deerfield.”

Day said Deerfield Academy is “happy they’re filming here” and the company has been “wonderful to work with” over the past year.

“They’ve really done their due diligence,” she said. “It’s pretty cool to see the back end of this.”

Day said no roads will be shut down during filming, but the Deerfield Police Department will be directing traffic. She urged people to stay away while production is happening.

“Things won’t be closed down,” Day said. “Let people do their thing.”

This year’s flu vaccine was a flop