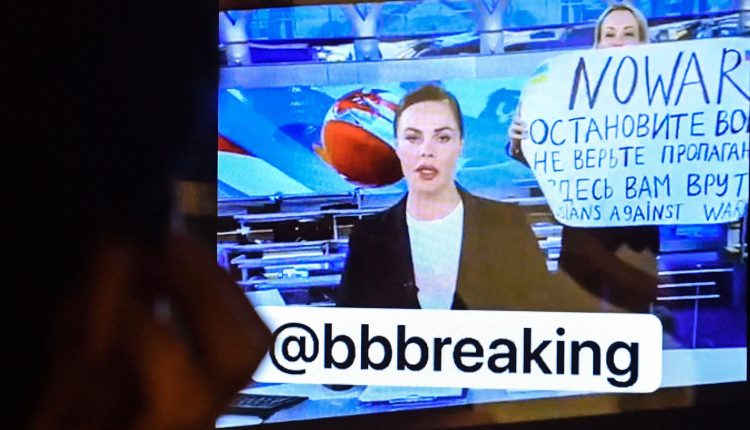 A state television employee burst onto the live broadcast of Russia’s most-watched news show Monday evening, yelling “Stop the war!” and holding up a sign that said “They’re lying to you here,” in an extraordinary act of protest against Russia’s invasion of Ukraine.

The woman, Marina Ovsyannikova, worked for Channel 1, the state-run television channel whose news broadcast she stormed, according to a Russian rights group that is giving her legal support. The group also released a video in which Ovsyannikova says she is “deeply ashamed” to have worked to produce “Kremlin propaganda.”

The news show, “Vremya,” is among the Kremlin’s flagship propaganda outlets, watched by millions of Russians every evening. The off-script intervention underscored how dissent is seeping into public consciousness in Russia, even after President Vladimir Putin has stifled opposition to the war and has enacted a law to punish anyone spreading whatever the government deems “false news” about its Ukraine invasion with up to 15 years in prison.

“We are Russian people, thinking and smart ones,” she said in the video she recorded, calling for Russians to protest against the war. “Only we have the power to stop all this craziness.”

On Monday evening, Ovsyannikova walked onto the set as the anchor was describing Russian talks with Belarus over how to soften the blow from Western sanctions, online videos show. She unfurled a sign with a Ukrainian and a Russian flag that said, in English, “No war” and “Russians against war.” In Russian, it said: “Stop the war. Don’t believe the propaganda. They’re lying to you here.”

Anchor Yekaterina Andreyeva, a veteran who has hosted “Vremya” for more than two decades, continued to read her script even as Ovsyannikova protested behind her. Within a few seconds, the show cut away from the set. Afterward, according to the Tass state news agency, Channel 1 said it was “investigating an incident with an outsider in the frame during a live broadcast.”

Ovsyannikova was detained after the protest and was being held at the television station, according to OVD-Info, an activist group that supports Russians detained for protesting. More details on her condition were not immediately available.

The moment went viral online in Russia, despite the Kremlin’s recent efforts to block dissent on the internet. Within hours, Ovsyannikova’s Facebook page had more than 26,000 comments, with many people thanking her or praising her — in Russian, English and Ukrainian — for her bravery.

Her protest followed Putin’s signing of a law this month that effectively criminalizes any public opposition to or independent news reporting about the war. The law could make it a crime to simply call the war a “war” — the Kremlin says it is a “special military operation” — on social media or in a news article or broadcast. Underscoring journalists’ fears of the law, the independent newspaper Novaya Gazeta blurred out Ovsyannikova’s anti-war poster in a picture of the protest it posted on Twitter.

Since Putin launched the invasion of Ukraine on Feb. 24, the government has also blocked access inside Russia to the websites of major Russian-language outlets that are based outside the country and to Facebook, a social network popular with the Westward-looking urban middle class where criticism of the invasion has been robust. On Monday, it also started blocking access to Instagram, which is a hugely popular venue for reporting and activism in Russia.

Thousands of protesters have taken to the streets and squares of Russian cities to protest in recent weeks, only to be met with heavy police presence. There have been about 15,000 arrests, according to a tally compiled by OVD-Info. Although Putin has been adept at ruthlessly stifling dissent in the past, he could face a challenge if the protests metastasize into a larger movement that punctures the official war narrative.

The English-language content of Ovsyannikova’s poster reflected how some Russians are keen to show that the war against Ukraine is not being fought in their name. Despondent over their country’s future and afraid of possible conscription and closed borders, tens of thousands of Russians have fled to Turkey, Armenia, Georgia, Central Asia and Europe since the Russian invasion began.